Former league operations boss Steve Hocking has warned AFL clubs will need their entire playing lists to be on standby this season as they plot how best to navigate the Omicron variant.

The COVID-19 pandemic has already impacted footy for the third consecutive year, with the AFLW season and men’s pre-season training programs interrupted through direct infections or players and staff being deemed close contacts and forced into isolation.

Hocking, now Geelong’s chief executive, presided over five changes to the Cats’ AFLW side ahead of last Saturday’s rescheduled clash against Carlton because of the league’s health-and-safety protocols. 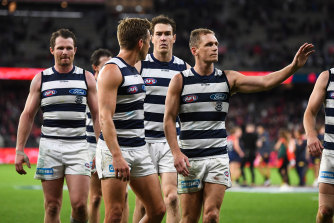 He said the men’s program, with the league’s official community series beginning on March 3 and the season proper on March 16, could also face losing players to health and safety issues as late as hours before matches.

“I think the reality is that is going to be the case,” Hocking said on Monday.

“Certainly, what we are working through with AFLW, we will have a lot of learnings from that, and I am sure most of the clubs across the comp are following that and trying to understand it as well.”

The AFL has introduced protocols for AFLW players to follow between games, including not attending indoor events with more than 100 people, with these under review this week, but the league is yet to outline official rules for the men, apart from needing to be double vaccinated to train and play.

While losing high-end talent can leave teams disadvantaged in the hunt for a title – an issue sports across the globe are dealing with – Hocking said it also presented opportunities for rookies and other players who otherwise may not have been considered.

“You are using your whole list, I think that’s what 2022 is going to be about, particularly for the men’s season as well. We are seeing that with the women’s season already – you are having to dive right deep into your list, and that’s not a bad thing,” he said.

While the past two men’s seasons have been significantly impacted by the pandemic, Selwood said his team could learn from how the women’s program had adjusted this summer to the new variant.

“They are leading the way on this, and teaching how to best manage it, too. Even the five girls we missed on the weekend, to not sit around, sook or hide it, they came out, stood up, and didn’t want to pass it [virus] on to anyone else, and we just move on with it,” he said.

Selwood said the Cats were ready to ramp up their pre-season training, with key forward Jeremy Cameron particularly impressive. In his first year with the club, having left Greater Western Sydney, Cameron endured hamstring issues, restricting him to 15 matches (39 goals). However, he hasn’t missed a session over summer, with state border restrictions even aiding the keen fisherman’s program.

“He has been going really well, to be honest. I don’t like to single out at this time of the year, but he hasn’t missed a session,” Selwood said.

“He had a really good off-season too where he was around here. He loves jumping in the car, taking off over the border and what not, but he wasn’t allowed to this year. It’s been nice that ‘Jezza’ has got a good block of training in and may that continue.”

Hocking said coach Chris Scott was “very close” to inking a long-awaited two-year contract extension, likely to be announced before the start of the new season.

“He is definitely going to be extended, we just have a couple of small things to finalise but his win-loss record is quite extraordinary,” Hocking said of the man who guided the Cats to the 2011 premiership but has struggled to take that final step in recent years.

“The other thing we have clearly done is make some adjustments around him as well … we have 15 new staff. There are nine new players at the club. There is certainly a different air around the place, which is a good thing, and is good for Chris as well.”

“It’s something that Chris has been leading on. Harry Taylor started last week, Eddie Betts will start this week. It’s really good to have those different voices around the club,” he said.

The Cats also confirmed Irish recruit Oisin Mullin has opted not to join the club, preferring to remain at home and continue with Gaelic side Mayo. Mullin had been due to join as a category B rookie.