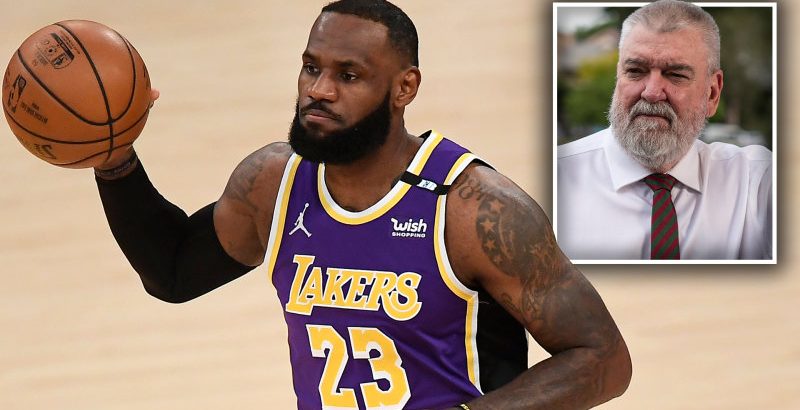 Every round is Magic Round if you’re an eternally optimistic supporter of St George Illawarra – currently $5 in early betting markets to beat the Storm ($1.18) on Sunday – but not so if you’re a fan of the Brisbane Broncos.

We all love a demise, especially when it’s not our own team, but the slow descent into madness of this once great club has been Britney-esque. 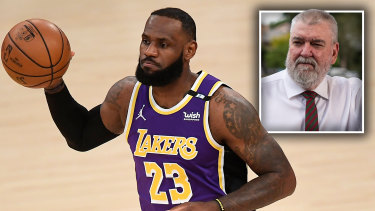 Shane Richardson, right, is drawing inspiration from the global brand of the LA Lakers for the Brisbane Firehawks NRL expansion bid.Credit:Getty

At its core, the Firehawks’ bid is about being everything the Broncos are not. They don’t want to take on the Broncos, Titans and Cowboys, something the ARLC is conscious about as it weighs up the three bids.

“We’re hunters not cannibals,” Shane said. “We are hunting new business and new people. Everyone can sign Wayne Bennett. Everyone can sign Cameron Munster. The hard part of the business is attracting new members and corporate sponsors who aren’t involved in rugby league. There are sponsors out there who haven’t been involved before because they want to be involved in a modern platform that’s appealing to an age group that isn’t already rusted on. We’re trying to attract new fans from the age of 15 to 35 and you can only do that by building a digital base that you can sell to the market.”

The Richardsons were reluctant to hand over too much detail about the bid before the Firehawks’ official launch in Brisbane next Tuesday.

Interestingly, before Magic Round the NRL warned all bidders about creating too much dialogue in the media. Unsurprisingly, several senior reporters have been wined and dined in BrisVegas over the past few days as the battle for the licence cranks up.

What the Richardsons will tell you is they are modelling themselves on one of the biggest sporting franchises in the world.

“The main guys we’ve looked at closely are the LA Lakers, the way they’ve commercialised their brand worldwide,” Brent said. “We’ve also looked at entertainment platforms like Spotify and how it builds loyalty among its users. And then brands like Red Bull and the way it markets itself. We’ve been lucky that we’ve been given this clean slate in building this franchise.”

The main arm of Rich Digital is about talent management. It has on its books Souths legend Greg Inglis, cricketer Marnus Labuschagne and Matildas star Michelle Heyman. It has also recently signed boxer Justis Huni.

It preaches a “10-30” mantra, meaning an athlete has a sporting career of about 10 years but then follows another 30 out in the so-called real world.

“The main guys we’ve looked at closely are the LA Lakers, the way they’ve commercialised their brand worldwide.”

“We monetise athletes at their peak to take the pressure off the contracting process to set them up for the next 30 years of their lives,” Brent said.

Much of that revolves around their social media. Since joining the company, Labuschagne’s Instagram following has grown from 150,000 followers to 350,000.

“For athletes, 90 per cent of the money across social media space is in Instagram,” Brent said.

Shane says he doesn’t want to steal clients from player managers, with whom he’s fought during the cut-and-thrust of contract negotiations.

In the meantime, there’s an NRL licence to snap up.

After years of debate about a second Brisbane team, things are finally heating up. Bids needs to be lodged in early June with the NRL expected to make a decision by the end of July. Exciting.

“We want to be the outlaws,” Shane said. “It will be totally different to what the Jets and Redcliffe are doing.”

You have to wonder if South Sydney captain and halfback and favourite son Adam Reynolds would be leaving if Richardson was still the head of football at Redfern.

Who would’ve thought it would be a Broncos jumper, Russell?

This is an embarrassment for Cronulla, who somehow couldn’t secure a deal with Reynolds, but mostly the Rabbitohs no matter which way they try to spin it.

Souths coach Wayne Bennett was fuming this week at the suggestion that re-signing Cody Walker was the reason for Reynolds being squeezed out because of salary cap pressure.

He might want to look inside the walls of his own organisation for that claim because some have been peddling it for weeks.

Reynolds wanted a two-year deal to stay. Souths wouldn’t budge on one year and have consequently let last year’s NRL top pointscorer – who is also at the top of the leaderboard now – walk out the door.

Sure, the NRL is for the big boys. Rugby league is one of the most ruthless, unforgiving sports imaginable.

But in one moment Flanagan showed the pressure on the young kid, who coach Trent Barrett sensationally hooked at half-time in the 32-12 loss to the Dragons.

“I just want to prove to people that I’m a good footy player,” the 22-year-old said.

Kyle, you’re a good footy player. You’re playing in the NRL and that’s more than any of us will ever achieve. Good ballplayers don’t develop until their late 20s anyway. You’ve got time.

Under NRL rules, the Bulldogs were required last Tuesday to present their entire squad to the media.

But the media department could’ve easily pulled him out if it considered it best for his welfare. Flanagan, to his credit, told them he was prepared to talk.

The first mention of his father, Shane, caused Flanagan to tear up.

There’s a belief that Shane is too hands on with his son’s career. It was an issue at the Roosters, before and after Flanagan was moved on just a few days after the season ended.

But what’s a father to do? It’s hard to criticise Shane for standing by his son, especially when he’s been dropped or doing it tough.

There’s also a belief that Flanagan is being made the scapegoat for the Bulldogs’ poor start to the year. The Bulldogs have deeper problems than Kyle Flanagan.

The quote
“Worry about winning one of these, bra.” – Former Storm now Sharks centre Will Chambers to Penrith players, pointing to the imaginary premiership ring on his finger. The Panthers were leading 36-0 at the time. Just do you, Will. Just do you.

Thumbs up
Wallabies prop Taniela Tupou led the Queensland Reds to victory over the Brumbies in an epic Super Rugby final but his emotional post-match interview with Sonny Bill Williams stole the show. “The last time I saw my family was back in 2019, so this one is for you mum,” he said.

Thumbs down
Last week, we gave the “thumbs up” to trainer Bob Baffert after Medina Spirit delivered him his seventh Kentucky Derby. Then the horse returned a positive swab for a banned substance. Baffert bizarrely blamed the positive on “cancel culture”, claiming it was never administered. A day later, he admitted it was.

It’s a big weekend for …

The Waratahs, who will equal their longest losing streak since Super Rugby started in 1996 if they lose to the Hurricanes at the SCG on Friday night.

It’s an even bigger weekend for …
Scone in the Hunter Valley. On Friday arvo, it’s the Scone Cup, a true staying test for all involved and not just the horses. That night, local boy Jock Madden will make his debut for the Tigers against the Knights.