Don’t miss a pick: follow our live blog for the first round of the AFL draft from 6.30pm Wednesday, with news and analysis of top players and club strategies.

When Nick Daicos moved to Carey Grammar at the start of year 10, firsts football coach Vince Dattoli knew what to expect.

He had the class, the flash, and the poise, and true to the Daicos DNA, he soon excelled as a dangerous member of the forward line.

What Dattoli did not expect was to find a clever half-back flanker. 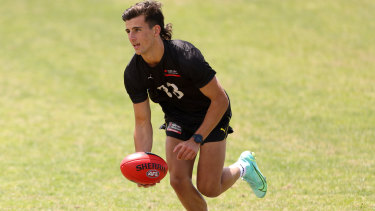 It was a move that emerged amid the challenge of a five-goal deficit against Xavier College as the coach moved magnets around the board in a bid to spark a side that also included Matthew Rowell and Noah Anderson.

“We threw the side around and played Nick at half-back for the first time,” Dattoli recalled. “He completely and utterly changed the game.”

Daicos would no longer be seen as the stunning young forward following in his famous father’s footsteps. Instead, he began to establish trademarks of his own through brilliant ball use and a knack for evading would-be tacklers.

“All his flashy goals and all of that kind of stuff, that’s what you expected, but you would never have picked Nick to play across half-back,” Dattoli said. “It was a complete change in my mind with the way we’d then utilise him, and I reckon it was a changing point even in his footy development. It added another string to his bow.” 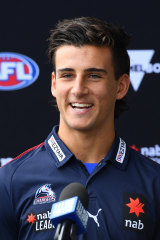 Nick Daicos is headed to Collingwood, where his father made his name.Credit:AFL Photos

Armed with his in-born flash up forward, and newly found composure off half-back, Daicos developed a well-rounded repertoire that left him primed for a starring role in the midfield. It would come for the Oakleigh Chargers in 2021. In his first NAB League outing of the season, he combined 28 touches with seven tackles and three goals. In the next contest, he booted three again, this time racking up 30 possessions. He would amass 40, 44, and 37 disposals in the remaining matches before the season came to an early conclusion.

“From a coaching eye or a recruiter’s eye, you could always see where Nick was going to track to. His talent was completely visible to anyone who didn’t already know him,” Dattoli said.

Daicos’ talent, even as a year 10, was level with Rowell and Anderson, who were selected at pick one and two respectively in the 2019 draft.

“He was right up there. He’s a good footballer with a high footy IQ, so he was at home with those guys. You had three really elite players all contributing in different ways,” said Dattoli.

Of course, Daicos always appeared destined for Collingwood. His father, Peter, booted 549 goals for the club while his older brother, Josh, is established in the team’s midfield.

Daicos spoke to reporters after a Victorian training session last week and said he “wouldn’t have it any other way”.

“I’ve been [training at Collingwood] for a few years now, I’ve been lucky enough to go through their programs and it always felt like home for me. With Dad and Josh currently playing there, I’ve just always wanted to play with him. I feel appreciated there, and I can’t wait to get started.”

He recently met with new Magpies coach Craig McRae, who made clear that he would be no certain starter in the best 22.

The precocious talent is thus far unfazed by the weight of the Daicos name but is conscious of the added pressure to perform for the eagerly awaiting Magpies fanbase. He admitted he had explored options with other clubs and contemplated against nominating as a father-son, but soon realised the pros in pulling on the black and white stripes would outweigh the cons — one of which, he joked, included estrangement from the Daicos family.

“No pressure, but they wouldn’t speak to me if I wasn’t [a father-son]. I think I was quite aware that I had to nominate,” he laughed.

“I don’t really read too much into it, to be honest. I’m aware there is a bit of pressure, but for me, I try to take the goods out of it.

“I know that I’ll be going to Collingwood because I am a father-son, so as much as there is pressure there, and there are some negatives, there are a lot more positives. I’m super grateful.”