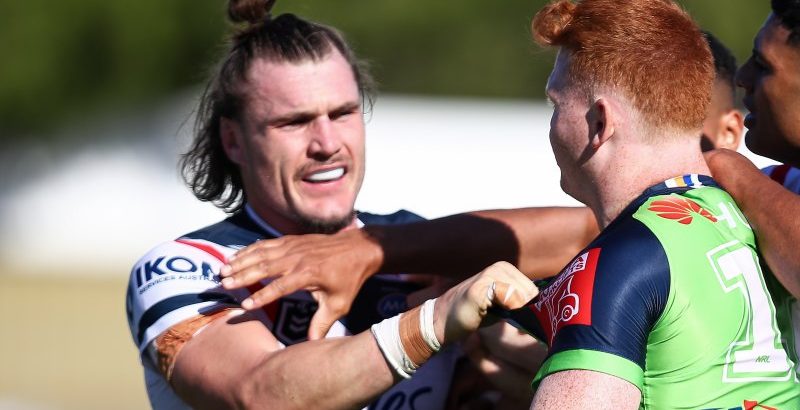 Angus Crichton wants it known he is only the temporary owner of Boyd Cordner’s No.11 jersey at the Sydney Roosters, and he will not stand in the way of his inspirational skipper when he returns.

Crichton appears set for another blockbuster season at the Bondi club, looking more than comfortable on Cordner’s left edge during last weekend’s trial against Canberra. 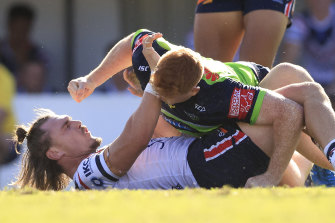 Angus Crichton was in the thick of it in last weekend’s trial against the Raiders.Credit:Mark Evans/Getty Images

Chooks coach Trent Robinson will have a selection headache after round 12, when Cordner is due back from an extended concussion layoff, if Crichton is dominating his rivals. But Crichton said it was a non-debate, especially as Cordner is “in my eyes the best back-rower in the comp”.

“It’s always an honour to wear the No.11 jersey, but it’s not mine, I just have to do it some justice,” Crichton said. “The No.11 jersey is Boydo’s. I’m just there until he gets back. I’ve played more on the right, but as a back-rower you don’t want to pigeonhole yourself to a certain side. I’ll do what the team needs me to do, and at the moment that’s me out on the left.” 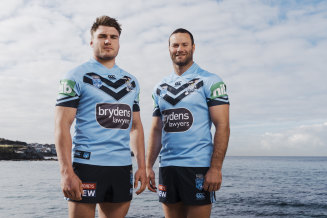 Cordner pulled out of the Origin series after another head knock in the Adelaide opener. The club have since applied for the maximum $350,000 salary-cap dispensation for losing him while on representative duty. The club must use that money on a like-for-like replacement rather than top up existing contracts.

As long as Crichton is fit, along with Sitili Tupouniua on the right edge, there is no great urgency for the Roosters to rush to the marketplace.

Cordner continues to mentor the players, including Crichton who could not speak highly enough of the one-club 28-year-old.

“To see what he has done for years and years, he never takes a backward step, he plays fearlessly in attack and defence, he is a leader through is actions – those are all things I aspire to have in my game but obviously with my own style,” Crichton said.

Crichton filled in for Cordner at club and Origin level. Like his skipper, he has no plans to leave the glamour club any time soon.

The 25-year-old former rugby prodigy is so happy at the Roosters he knows his blind and often public love for them could cost him extra dollars elsewhere – but he does not care.

“I want to stay, it’s such a great club,” said Crichton, who remains unsigned beyond this year.

“The people, the club itself, the area, the coaches, the players, the fans; it’s my childhood team I grew up supporting. I respect the way the club goes about its business. The club is built on hard work and it’s a place I’d like to stay. I’d like to sort it out soon, but I know these things can take time.”

Crichton spent a couple of games in the middle last year, and the return of Victor Radley from a serious knee injury will add plenty of grunt to the pack. A shoulder injury and fresh start at the Roosters always meant Crichton would take time to find his feet in 2019 but he improved with every game last year.