Concussion campaigner Peter Jess has accused the AFL tribunal of being negligent in its duty to protect players from serious injury, as debate raged over the decision to clear Adelaide’s David Mackay of rough conduct.

The three-man tribunal jury of Paul Williams, David Neitz and Richard Loveridge found after more than an hour of deliberation on Thursday night that Mackay had not acted in an “unreasonable” manner in his collision with Hunter Clark which left the St Kilda player with a broken jaw and out for the rest of the season. 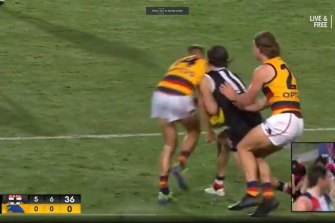 Hunter Clark was left with a broken jaw after this collision with David Mackay .Credit:Seven

Jess was instrumental in Worksafe Victoria launching ongoing health and safety inspections of Victorian clubs, and the manner in which they are handling head knocks.

The AFL Players Association presented a letter to the tribunal, declaring that match review officer Michael Christian had failed to discharge his duties and that league football operations chief Steve Hocking had misused his position to bring this case before the tribunal. The letter was dismissed, but the AFLPA on Friday said the right outcome had been reached.

The spotlight is now on Hocking, who had sent adjudication on the collision directly to the tribunal.

In a statement earlier this week, the AFL claimed Mackay had “carelessly engaged in rough conduct that was ‘unreasonable in the circumstances’” and said a suspension of at least three weeks was “appropriate”.

While there has been no legislative change in terms of how players attack a loose ball, former North Melbourne premiership player David King said change was coming.

“I wouldn’t want to be doing this exact same thing next week, mind you. I think that players accept that there’s a shift – it may not be legislated, it may not be in print yet,” King said on Fox Footy.

“I think we will get there, it’s just a matter of how far down the track. It might be three years, might be five years, but we’ll get there because the cost is too significant.”

A relieved Mackay said despite being under an intense spotlight this week, the case would not change the way he played but he had a “great respect” for the charter of the game.

“It was never my intention to cause any harm. I was only trying to win the ball so I wish him [Clark] nothing but the best moving forward,” Mackay said on Thursday.

Speaking on Triple M on Friday, Mackay added: “It’s pretty clear what is acceptable and what isn’t. But, having said that, there are times times when accidents do happen, that’s the nature of the game by the way it is played.”

Mackay was found at the tribunal to have arrived at the contest for the ball less than half a second later than Clark. 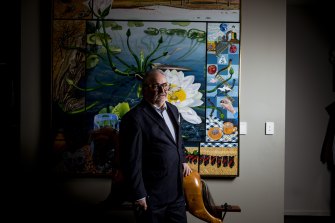 “At the moment, we have to do what we can from a technique point of view to ensure that we do what we can in that space to prevent injuries … to protect ourselves but also doing what we can to protect an opponent as well where applicable,” Mackay said.

Essendon great Matthew Lloyd used social media to say he had “a great sense of relief for the game” after Mackay was cleared but then turned the spotlight on Hocking’s decision.

The AFL was contacted for comment on Friday. It has regularly stated that it has strengthened its head-knock protocols over the past decade, including this season introducing a mandatory break of at least 12 days for concussed players, while re-introducing a medical substitute player.

Among those praising the tribunal’s decision, Richmond legend Kevin Bartlett said Mackay “had to get off” the charge, Liam Pickering, a prominent player manager, said the decision was a “win” for the game, while Port Adelaide great Warren Tredrea said Mackay should never have been charged.

“He didn’t bump, nor leave the ground. AFL is a brutal contact sport and accidental collision injuries happen,” Tredrea said.

Carlton legend Ken Hunter, who had three broken jaws in his career, told The Age earlier this week that players now needed to adjust in how they attacked a loose ball.