Luke Thompson has been referred straight to the judiciary after allegedly eye-gouging James Tamou.

Thompson appeared to eye-gouge the Panthers captain during the first half of Canterbury’s 42-0 loss to the minor premiers. 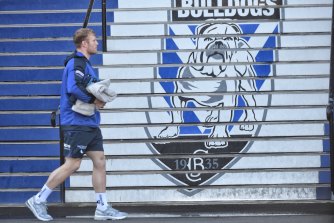 Tamou believes the absence of prior incidents on Thompson's rap sheet led him to believe he should be given the benefit of the doubt.

"I don't think he has done anything throughout the year so from my point of view I don't think there was much in it," Tamou said.

"He was trying to get something and my eyes were closed.

"He said [on-field] oh I didn't realise it was an eye gouge I didn't know what was going on, and I said, 'that's all right man, it didn't really affect me too much'.

"In the whole scheme of things when you're playing the game you just get sort of caught up in it all and I hope nothing comes of it and I hope he sticks around. Because he's a good player."

Both Cooper Cronk and Mal Meninga agreed with that assessment.