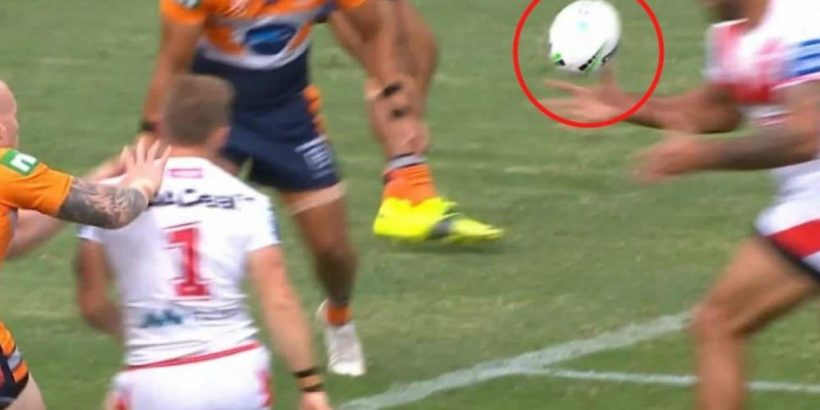 The new NRL rules have broken the Dragons’ hearts on Sunday afternoon, after the bunker took back a try awarded to the side early in its match with the Knights.

Some quick hands from the Dragons’ right edge sent winger Mikaele Ravalawa over in the game’s ninth minute.

The on field referee awarded a try but when the bunker had a closer look, it appeared the ball may have hit the thumb of Dragons hardman Josh Kerr and travelled forward.

“This is as close as it gets,” said Fox League commentator Andrew Voss.

“That could be a big moment”.

Under the new rules implemented by the league this season, the bunker may overturn the on field referee’s decision to award a try, provided they do so before the scoring team’s kicker takes their shot at goal.

The Newcastle crowd rejoiced as Ravalawa’s try was overturned.

“As a dragons fan; all I feel is pain,” tweeted YouTuber Jarrad Nance.

Adding insult to injury, Newcastle scored a miraculous try up the other end of the field a minute later, after Dragons youngster Cody Ramsey spilt the ball from a kick close to his side’s line.

In his post-match press conference, Dragons coach Anthony Griffin admitted he thought the bunker’s decision was “a tough call”.

“If he’s touched it, it’s hard to see where that’s gone forward. I thought it was still going backwards. It was a big turning point in the game,” he said.

“What a blow this could be for Newcastle and their season,” said Ennis.

In his post-match press conference, Newcastle coach Adam O’Brien said the game was “pretty much carnage” and confirmed the side may have to contend without Pearce for months.

The Dragons struck back shortly before half time through veteran Trent Merrin, who crossed for his first try since 2018.

“Last time he scored a try there was the iPhone 3,” joked Voss.

Tex Hoy, who has been deputising for Kalyn Ponga as Newcastle’s fullback, followed Pearce into the casualty ward later in the half with a hamstring injury.

A Kurt Mann field goal put the home side one point up at the break, as both teams look to gain the upper edge in the second 40.

Newcastle big man Josh King opened the scoring in the second half, crashing over in the 48th minute to put the Knights seven points ahead.

The Red V returned serve shortly after to keep the contest alive — Tariq Sims wound back the clock as he cut through the Newcastle line effortlessly.

A second four-pointer to Sims handed the Dragons enforcer the fifth double of his career, before a try from Bryaden Wiliame sealed the deal, 22-13.

The win was the Dragons’ third in a row under new coach Anthony Griffin. They’ll look to make it four on the trot when they face Parramatta next week.