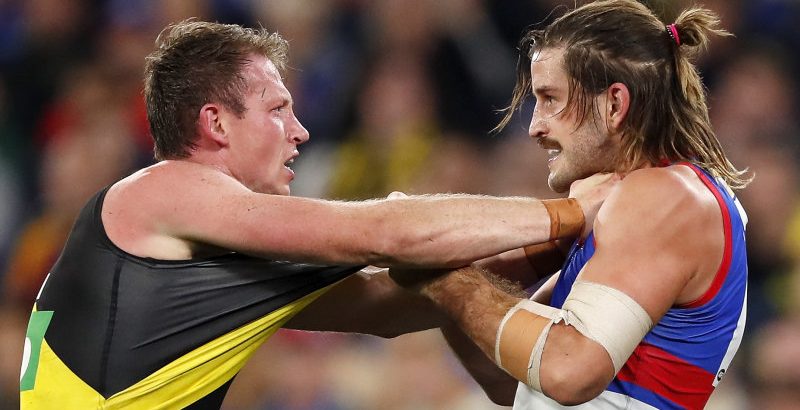 No Dusty, no worries. Reports of Richmond’s demise may have been premature after the Tigers inflicted the Western Bulldogs’ first defeat of the season with a stirring 22-point win at the MCG on Friday night.

Missing several premiership stars, including champion Dustin Martin – unavailable because of concussion protocols and visiting his father in New Zealand – the wounded Tigers rebounded from a two-goal first half and a 25-point deficit midway through the second term to post their finest win of the season.

The Tigers had a 3-3 win-loss record, with victories only over bottom-six sides Carlton, St Kilda and Hawthorn, heading into this clash but this performance reaffirmed why they remain a dominant force and ensures another blockbuster against Geelong next Friday night. 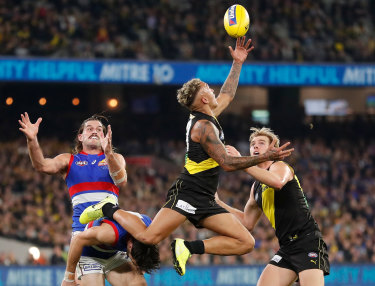 Their third term was a sight to behold. At one point, the Tigers dominated the inside-50 count 12-0, their comeback sparked by a Jack Riewoldt lead and goal. Then came a pivotal play when Tom Lynch marked on the edge of the goal square. To that moment, the under-fire forward had managed 0.5. This time he converted, and the Tigers were on a roll. Jack Graham sharked a tap to snap their next and the Tigers had their first lead when Lynch again bested Zaine Cordy and converted from 25 metres.

The Tigers’ ferocity was stunning, coming at a time when several of the Dogs’ prime movers, including Jack Macrae and Adam Treloar, all but disappeared. And why the Bulldogs could not handle the pressure will surely be one of their review points on a night their six-game winning streak to start the season, their best since 1946, was snapped.

The Tigers’ ability to win the ball in close and then their run and carry stalled the Dogs’ bright start, this igniting when they faced a four-goal deficit in the second term.

Ruckman Toby Nankervis had the better of Stef Martin, while the off-contract Shai Bolton, with three goals, and Trent Cotchin – subbed off late in the final term wth a hamstring issue and declaring he would have scans – had a major impact after half-time. Bachar Houli, the No. 1 ranked player on the ground, was dominant across half-back and delivered the sealer when his 50-metre drop punt cleared the pack.

“We managed to hang in there … showed more composure,” Cotchin said.

Aaron Naughton was dangerous all night but the Dogs needed more from Josh Bruce and Josh Schache, the latter back in the side only because of Tim English’s concussion.

Skipper Marcus Bontempelli worked diligently all night, as did Bailey Dale and Bailey Smith, but the Bulldogs’ class, so obvious until this point, vanished when the Tigers lifted their intensity.

Early kick in the guts

The Tigers have had set-shot issues over the past month and that continued in the first term, with Lynch the primary culprit. Put under the spotlight through the week for a slow start to the season, the key forward had the better of Cordy in the air but botched three set shots. This appeared to knock his confidence, and Lynch, having marked just outside the goal square late in the term, made a bewildering decision to handball to Jake Aarts, who had to dodge defender Alex Keath before snapping the Tigers’ first. It didn’t get any better for Lynch in the second term, for he missed another two shots. We know what happened after the break.

Umpires in no rush

Veteran Tigers defender Dylan Grimes was fortunate to avoid being pinged for a deliberate rushed behind when he fumbled the ball through for a point late in the first term – when there was no opponent within metres. That should have been a free kick for the Bulldogs, although the Tigers were unlucky earlier when Easton Wood should have been pinged for holding the ball just metres from the Tigers’ goal.

Naughton showed his forward smarts in the second term when, dashing back to goal, he doubled back and accepted a short pass from Lachie Hunter. But his ugly shank late in the final term summed up the Bulldogs’ plight after half-time.

There are few better playmakers from defence than Caleb Daniel. That he looks to take the difficult inboard kick when it’s there is what makes him a particularly dangerous weapon. He is clinical by foot and that was highlighted when he had 100 per cent accuracy with his nine kicks to half-time.