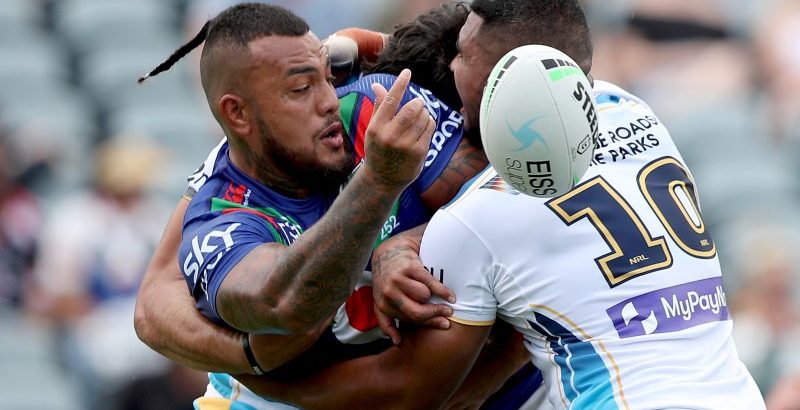 The Titans have stumbled at the first hurdle in their big-money endeavour to become a serious finals threat with the Gold Coast side slumping to a 19-6 loss in 32-degree heat against the Warriors on Saturday.

The Titans made waves by recruiting Origin duo David Fifita and Tino Fa’asuamaleaui in an effort to end their finals drought, having last made the top eight in 2016. 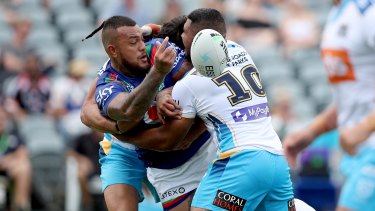 Warriors recruit Addin Fonua-Blake gets away an offload against the Titans on Saturday.Credit:NRL Photos

The Warriors adjusted to the heat the quicker of the two sides and Sironen took advantage of an error from Moeaki Fotuaika to cross. The try – as well as the overall performance – would have been satisfying for new Warriors coach Nathan Brown, who successfully lured Sironen from the Rabbitohs with a three-year contract at the end of last year.

In his first hit out in the Titans colours, Fifita looked lethargic throughout the first half, running just 41 metres – the fewest of the Titans starting forwards in the opening 40 minutes. After the game, Fifita said he had been battling an infection throughout the week.

The Titans started the second half the stronger but were denied a levelling try in the 43rd minute due to a messy knock on. They then butchered an easy chance in the 44th minute after Brian Kelly’s final pass to Anthony Don was called forward with the tryline begging.

The double fault gave the Warriors an opportunity to capitalise, with Leeson Ah Mau crashing over in the 52th minute before Kodi Nikorima extended the lead to 18-0 with a try with 10 minutes to go.

Titans winger Corey Thompson finally broke through for the Titans in the 74th minute to raise the prospect of a nervy finish, but Gold Coast failed to capitalise on several chances and a Chanel Harris-Tavita field goal in the final minute sealed the Warriors’ win.

NRL chief executive Andrew Abdo was in attendance to thank the New Zealand side for extending their stay in Australia. Last week, the Warriors confirmed they would now be remaining in NSW until the end of June due to the uncertainty of the trans-Tasman travel bubble – again extending their wait for a home game.

During the 20-minute drinks break, Abdo shut down the ambitious plans of Warriors boss Cameron George to host up to 20 NRL games in 2022.