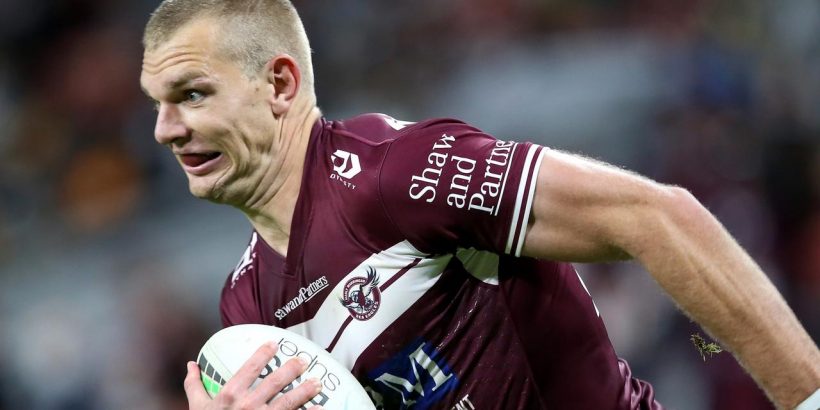 Manly fans have suffered a major blow to their top four aspirations with reports on Sunday afternoon that Tom Trbojevic could miss the remainder of the regular season with a hairline fracture in his cheekbone.

Coming after 56-10 thrashing of traditional rivals Parramatta on Saturday night to knock the Eels down to sixth and themselves just two points out of the top four, Trbojevic was initially cleared before the news came out.

The race to the 2021 NRL Telstra Finals Series is on and every game matters. Watch Live & Ad-Break Free on Kayo. New to Kayo? Try 14-days free >

But the Sea Eagles released a statement that Trbojevic had suffered the knock to a plate from a previous fracture.

“Tom has some swelling and bruising around the site. He will be given every chance to prove his fitness for next Friday night’s match against the Canberra Raiders,” the statement read.

Trbojevic however has been such an important member of the Sea Eagles’ side, having taken the side from 15th in round five with a single win to one of the premiership favourites.

He scored a try and assisted four more on Saturday.

It appears to be from an injury in September 2018 when he broke his left cheekbone and required surgery.

Tom Trbojevic is playing at a completely different level.Source:Getty Images

News Corp was told Trbojevic will miss at least two games with the next two matches against the Raiders and Bulldogs, before the final round against North Queensland.

On Fox League on Sunday afternoon, Warren Smith said reports were that Trbojevic would likely miss the remainder of the regular season.

“That is a massive massive blow for the Sea Eagles as they pushed for the top four,” he said.

Greg Alexander added: “How good did they look last night against Parramatta and even the week before against the Melbourne Storm. And Tom Trbojevic is having a season like I don’t think any other individual has had.”

It could threaten to ruin the Sea Eagles’ top four aspirations with Manly having won just 11 of 35 games without Trbojevic since 2019.