Tonga's national team will be rebadged as a Tonga Invitational XIII to help save end-of-season Tests against Great Britain and Australia.

Kristian Woolf is poised to return as head coach of the Pacific nation, which has been engulfed in a tug of war over control of the country's national body amid a push for Israel Folau to return to the 13-player game. 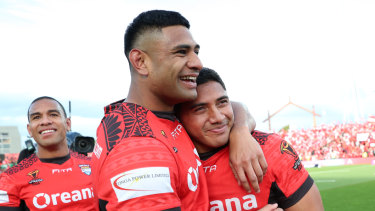 Samoa will play Fiji on the same night as part of an Eden Park triple-header.

The RLIF said the previous suspension of Tonga's membership under the TNRL had nothing to do with blocking Folau's bid to rejoin rugby league, but rather solving an internal dispute.

Woolf's return to the helm of Tonga will come after the former Knights assistant took control of the last two games of Newcastle's NRL season following Nathan Brown's exit. Woolf will take over English giants St Helens next season.

Meanwhile, Rabbitohs captain Sam Burgess won't be part of the Lions tour after struggling with a shoulder injury in the latter part of the NRL season.

"Sam's had an ongoing problem with his shoulder which everyone will be aware of playing in the NRL and he will miss out," RFL's rugby director Kevin Sinfield said.

"It's probably going to require surgery but again we’re waiting to confirm on that. He's gutted he will miss the opportunity and we are as well."