Potential draftee Josh Cripps is continuing to catch the eye of AFL recruiters despite battling shin splints in his return from a knee reconstruction.

The 19-year-old ruckman, who is the younger brother of Carlton captain Patrick Cripps, ruptured his ACL midway through last season but made his long-awaited return for East Fremantle as a top-age prospect in June.

Cripps combined 14 disposals with as many hit-outs on Sunday as Western Australia recorded a 10-point win over South Australia in the last under-19 state clash of the season. 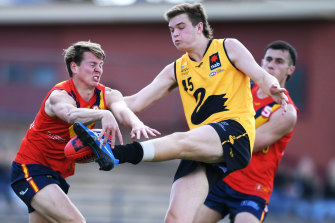 Left-footer Josh Cripps gets his kick away against South Australia.Credit:AFL Photos

WA talent manager Adam Jones said the 199-centimetre big man was tracking “remarkably well” given he made his return from the dreaded ACL injury only four months ago.

“He probably had about six weeks before he really got going in the Colts and then had an outstanding four-week block where he was averaging mid-20 possessions and a couple of goals a game,” Jones told The Age.

“It’s been a tough campaign for him … he hasn’t had a pre-season or anything behind him. What he’s been able to do is a real credit to the work he put in during his rehab. He’s a top quality kid.”

One recruiter pondered whether Cripps could emulate Richmond’s three-time premiership ruckman Toby Nankervis, who often makes up for his 199 cm height by beating opponents at ground level.

“He’s got a fantastic skill set for a big man,” Jones added. “He’s gone forward and been able to take some really strong marks and kick goals, so he’s got that ability to be a ruck-forward option.”

Cripps was not the only WA prospect with a familiar surname to feature on Sunday.

Jesse Motlop, son of former North Melbourne and Port Adelaide forward Daniel, is one of
this year’s top pressure-forward prospects and gathered 15 touches in the win.

“He’s a very high-quality individual. He has some leadership ability [and is] a really strong contributor in our team meetings,” Jones said. “He’s got the ability overhead, very smart, clean, skilful, he’s just a well-rounded player and individual.”

Motlop is not eligible for father-son selection — Daniel did not surpass 100 games for either of his two clubs — and while he is part of Fremantle’s next-generation academy, the Dockers are not able to match a top-40 bid for the 176cm forward due to his status as a metropolitan prospect. He is widely viewed as a top-30 chance.

Taj Woewodin, son of 2000 Brownlow medallist Shane Woewodin, has also forced his way into draft contention after a prolific year at under-19 level and was prominent with 18 touches and six marks on Sunday. Melbourne will have priority to the East Fremantle product as a father-son option.

“He’s another one with a really well-rounded game,” Jones said. “He’s not the quickest player, but he’s clean, skilful on both sides and can play multiple roles. He’s a great free hit for Melbourne.“

Midfielder Angus Sheldrick continued to rocket into top-30 contention with a best-on-ground performance, blending 29 touches with eight clearances and five inside 50s. 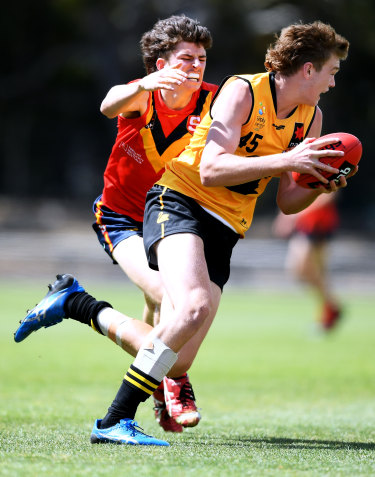 For South Australia, Blayne O’Loughlin, nephew of Sydney Swans legend Michael, extended a rich run of late-season form and has caught the attention of under-19 coach Tony Bamford on the half-back flank.

“First game [against WA] we played him as a deep small defender and had his work cut out over in Perth. But after that, we moved him higher up the ground across half-back, and he looks like a different player up there,” Bamford said. “He’s been able to impact in both offence and defence.”

Port Adelaide father-son prospect Jase Burgoyne — son of Peter — was used on the wing after playing at half-back and in the forward line in previous contests. Bamford conceded he had not shown his best form in state games, but had still attracted the interest of AFL clubs.

AFL trades 2021: Stay across the moves, news and what it all means as our Real Footy newsletter goes daily for trade period. Sign up to get it here.