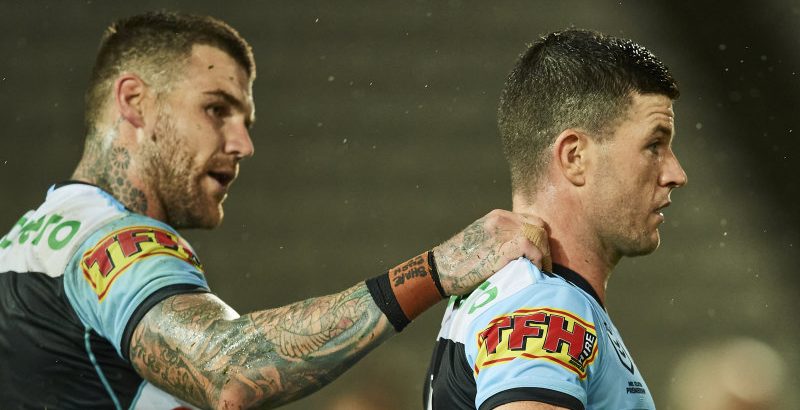 It was a rainy trip up the Hume Highway for the Raiders, but by the end of the day entering the flood zone was worth it. 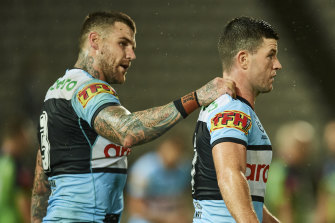 Chad Townsend is comforted by teammate Josh Dugan after missing a chance to send Cronulla’s match against Canberra into golden point.Credit:Getty

It was a disappointing end to a huge comeback effort from the Sharks, who had walked into the sheds at half-time without a point on the board.

“I just thought he would correct his last kick,” he said.

“I thought he would get it. But I promise you, I have lost a lot of those games too, so I’m happy to be at the other end of that. 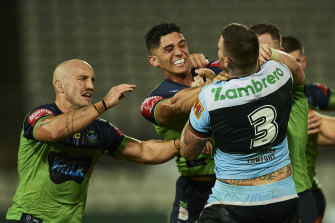 Whatever Stuart’s counterpart John Morris said to the Sharks during the break must have been something. It was William Kennedy who got the hosts back in the game in the 54th minute.

The Raiders clocked up a 92 per cent completion rate by the end of 40 minutes. By the end of the game, that metric had been reduced to 77, but it was the Raiders’ first-half effort that brought them the two points.

After being denied the opening try last week, Sebastian Kris found a gap in the 23rd minute to get the first points of the day, after a huge defensive effort from the Sharks.

The try marked his fourth in just six first-grade appearances.

Curtis Scott doubled-down on his round one performance, chasing down a loose ball from Cronulla to lead the Raiders to their second try, which was finished off by Hudson Young. The desperation was something unseen from Scott last year and led to him being dropped amid his legal woes.

But his passion boiled over at one point, pushing Ronaldo Mulitalo down in the final 10 minutes which led to a melee breaking out between the two sides. The heated moment somehow led to Bailey Simonsson and Dugan having it out, butting heads as they fell to the floor.

It was not the game’s only moment of drama. Controversy also ensued shortly after the Sharks took their first try of the day.

The Sharks were midway through an important set when a trainer stopped play to attend to Jack Wighton. Wighton had taken his position in the line as the trainer checked him while on his feet.

The moment sparked heavy booing from the Sharks stands.

The Sharks were without Jesse Ramien, who was hit with a three-week suspension following a high shot on Dragons fullback Matt Dufty in the season-opener.

The suspension allowed Mawene Hiroti to come into the side for his third first-grade appearance for Cronulla, who was taken off the field after two lost balls in under pressure moments.

Cronulla were still without Andrew Fifita who was once again left out of the 17 by Morris, with the coach instead using the team who got the two points in round one.