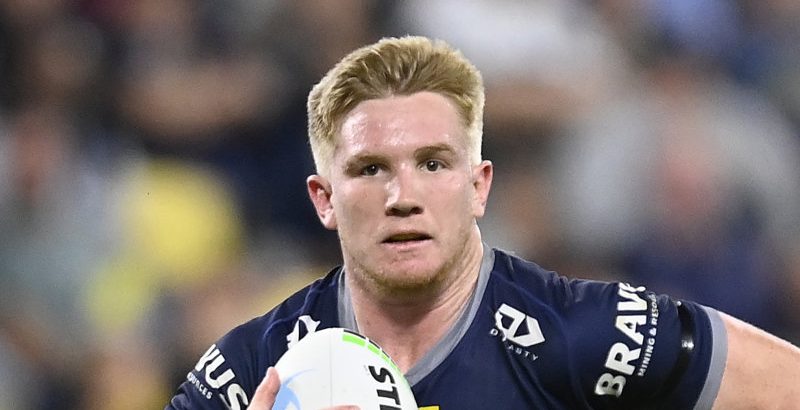 North Queensland playmaker Tom Dearden has started wearing a protective cup over the testicle he ruptured and briefly left him fearing he would limp out of the NRL finals.

Dearden ruptured his testicle midway through the first half against the New Zealand Warriors in round 23 and, despite wincing in pain when he made the tackle that inflicted the damage, went on to score two tries in a man-of-the-match performance.

Cowboys coach Todd Payten revealed on radio Dearden was prepared to lose his testicle if it meant he could play September football.

Dearden this week told the Herald there was never any need for the surgeon to “cut a nut out”, but the three days straight after emergency surgery left him in excruciating pain.

“When Toddy said what he said, I think he was trying to make the point about how much playing semi-finals footy means to the players,” said Dearden, who lines up against Parramatta on Friday night.

“The surgeon said it would never get to the point where I would have to cut a nut out. 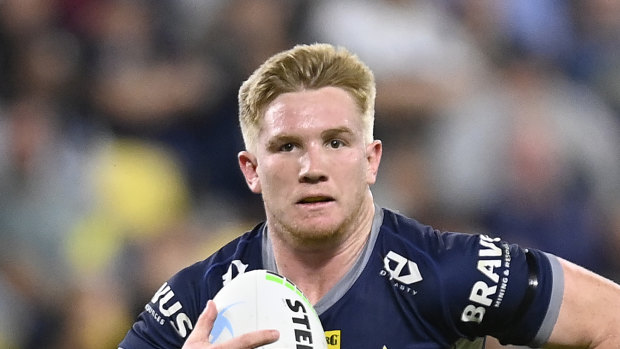 Tom Dearden has been waring a protective cup over his ruptured testicle.Credit:Getty

“It was obviously a nervous time for me. I did it about 20 minutes into the Warriors game. The adrenaline kicked in so I didn’t really know I had done much damage until later that night.

“I felt sick and nauseous that night.

“When I showed the doctor the next morning how swollen it was, he sent me straight to hospital and I was having surgery that afternoon.

“The surgeon was talking about how there was a 10-to-12-hour window to stop the bleeding so they can try and save it.

“They drained all the blood and stitched it up. It was a quick surgery.

“The boys pretty much started with the jokes the next day at recovery. It then ended up in the media, and there have been jokes about it [ever since].”

Dearden, 21, not only had concerns about making a speedy recovery but also his ability to have children, which was thankfully not impacted.

“The surgeon assured me I’d be able to get back on the field quickly, but also look after my future in terms of having children,” Dearden said.

“I returned for that final game against Penrith, and I wouldn’t have played if I didn’t think I was 100 per cent. 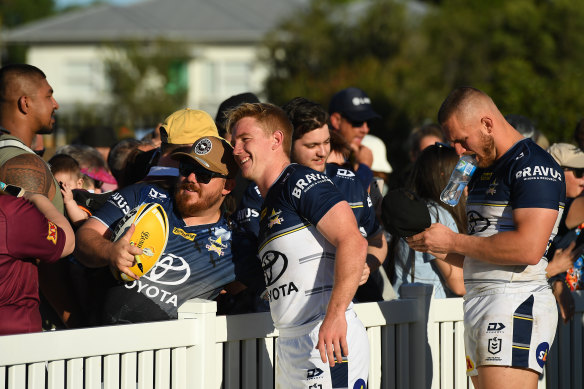 Cowboys playmaker Tom Dearden has been fantastic for the CowboysCredit:Getty

“I’ve only played two games since, but I’ve worn the cup both games.

“It’s more for precaution in case you get another hit there.”

Testicle injuries have made the news on a couple of occasions this year, with English player Jack Johnson telling the Herald last month how his testicle had “exploded” during a training drill with Newcastle Thunder, who play in the second-tier Championship, and his testicle was removed.

“[At least] my penis is still in full working order; I also asked if I could keep the testicle that was removed so I could put it in a jar on the mantelpiece in the living room, but they just got rid of it,” Johnson quipped.

Warriors playmaker Chanel Harris-Tavita ruptured a testicle on Anzac Day against Melbourne and required surgery, with New Zealand CEO Cameron George admitting: “It makes every man wince let alone going on to play another half of footy.”