The woman at the centre of the Tyrone May sex scandal has spoken for the first time about the “traumatic” experience and expressed concerns that the Penrith playmaker’s post-grand final social media post shows a lack of remorse about the incident.

May narrowly avoided a jail sentence after pleading guilty to four counts of intentionally recording an intimate image without consent. During his sentencing in January 2020 Magistrate Robyn Denes described May’s behaviour as “reprehensible” and “right on the cusp of a custodial sentence”.

The victim subsequently filed defamation and breach of privacy proceedings in the Supreme Court, with the parties agreeing to an out-of-court settlement in July. The woman had hoped that was the end of a saga that had taken a huge personal toll on her.

However, she was forced to relive the ordeal when May appeared to play the victim in a social media post following Penrith’s grand final win over South Sydney. May captioned a photo of himself and Panthers coach Ivan Cleary leaving Parramatta Local Court with lyrics from Canadian rapper Drake: “And the dirt that they threw on my name turned to soil and I grew up out it. Time for y’all to figure out what y’all gon’ do about it. Love my brothers”. 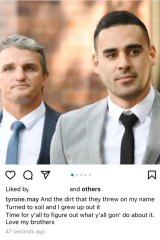 Breaking her silence on the condition of anonymity, the woman said the post had triggered memories of the most difficult period in her life.

“Definitely, there was a traumatic response, for sure, 100 per cent,” she said. “When it first happened, and it wasn’t until I started seeing my psychologist, I was someone who had my walls very high.

“I’m someone who struggles to show their emotion and my coping mechanism is to go ‘who cares’ and throw it under the rug. I did it for so long that it got to the point where I’m actually heavily medicated now because of it.

“I see my psychologist on regular occasions and I have to work through that. I had quite a lot of panic attacks, so with this coming back, it triggered that as well.

“I walk around in Penrith and everyone is looking at me because they know [it’s me in the video]. I’m walking around paranoid 24-7.”

In the statement of claim filed in her civil proceedings, lawyers acting for the woman said she was suffering psychological injury, anxiety, depression and post-traumatic stress disorder.

She said she is yet to receive a full apology from May. During the criminal proceedings, the court was told that May had sent the following text to a woman involved in the sex tape: “Oh f–k, so sorry. I hope you are okay. I will try to keep you in the loop from my end. Thank you for being such a legend.”

“I’m pretty sure, when you see the way he’s acting, that he hasn’t learnt anything,” she said. “He is still in the exact same spot. Wake up to yourself. You need to learn.

“If I want to go and [have sex in private], that’s me. That shouldn’t be shown to the world. But unfortunately, it did. Now I struggle. I’ve had two relationships since then and I struggle to hold relationships because I have to be open and honest … Once they find out, I can’t maintain a relationship because of it.” 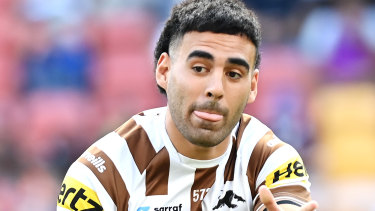 Asked about the “likes” or messages of support May received on social media from some Penrith teammates, she said: “You have basically supported someone who has committed a crime.”

“Tyrone’s social media post is currently under investigation by the NRL,” said Panthers CEO Brian Fletcher. “Out of respect for that process, the club is awaiting an outcome before considering further action.”

“My brother-in-law rang me up,” she said. “There’s an NRL group on Facebook and it got posted. They all saw it there. It got shared and posted everywhere.

“My brother-in-law sent it to me. He posted in that group: ‘Get rid of this. How would you feel if this was your daughter? Show her some respect’.”

The woman said she had never been contacted by the Panthers or the NRL to check on her welfare.

She played rugby league in her youth, has been a long-time fan of the Panthers, but has struggled to watch their games.

She said that May’s 13-minute cameo off the bench in the grand final win didn’t suddenly redeem him.

“It shows how silly he is,” she said. “If I was in his position, I wouldn’t say a word about it.”

She said she felt she was being judged more harshly for her involvement in the tape than May was.

“In terms of judging, a lot of my girlfriends … have actually drifted apart from me,” she said. “They don’t speak to me, they don’t associate with me. I don’t have a big friendship group.”