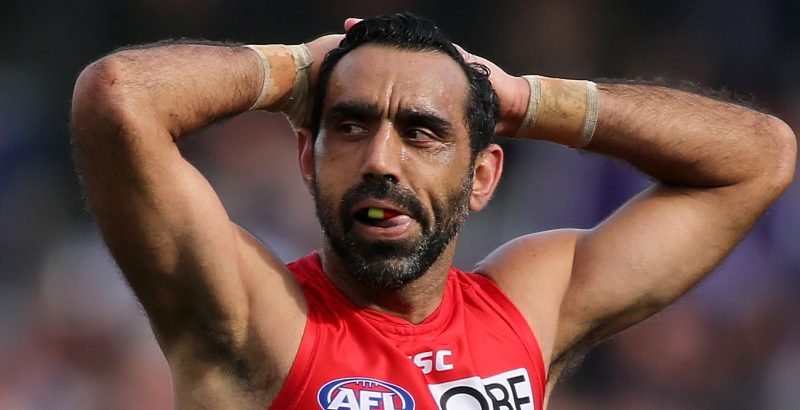 There is a principle I remember from my failed law studies: “It is not every slip or mistake that imparts negligence.”

It is the law’s way of saying that before defining someone as negligent, you have to look beyond errors and one-off mistakes, and see if they have form in the field. 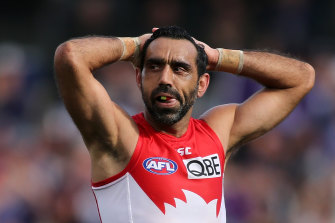 Adam Goodes was repeatedly vilified by some AFL fans towards the end of his playing career.Credit:Getty Images

The view of my friend, the sports commentator Francis Leach, was also emblematic: “Just forgive and forget, because, you know, it’s footy! They still don’t get it.”

In that whole imbroglio, allow me to say I am entirely on the side of Lusetich, Leach and, indeed, Goodes himself. There is not a word Watson said that I agree with.

But it is not every slip or mistake that imparts negligence.

Watson does not have any history of racism, and is a fundamentally decent man. Those obtuse comments he made did not come from the same place as the bone-ignorant booing from the revolting racists who turned on Goodes in 2013 and never let up.

They came, in my view, because Watson just doesn’t get it, and the point is, whole swathes of Australia are still just like that.

In terms of the Indigenous experience in this country – just how appalling it has been in this country – I personally didn’t get it either until I read a book a decade ago on the Myall Creek massacre, which opened my eyes. I knew things had been bad, historically, but I had no idea how bad.

When it came to Goodes’ experience, I certainly didn’t get that until I saw Ian Darling’s documentary The Final Quarter, which allowed us all to see up close for the first time just how appalling his treatment was. The vilification. The nastiness. The mass racism, with whole crowds booing his every touch of the ball. Before seeing it, I guess I felt Goodes might have occasionally come up against racism in his career, but Jesus wept! THAT shocking? I had no clue.

I came away reeling, just from watching it. What was it like for Goodes to be on the receiving end of it, to actually live with that kind of treatment from AFL fans and toxic commentators such as Jones?

I have no clue, genuinely, no clue. I can imagine, but even then I suspect I am not even close to understanding the horror and hurt. None of us with comfortable white lives – starting with Tim Watson and myself – can. Only Goodes can know, together with those who have lived that kind of experience.

The way forward for this country to heal?

It is to isolate or ignore the genuine racists. Their bigotry goes clear to the bone. And we need to talk to the others, to make those who still don’t get it start to understand. Goodes himself has changed the conversation, and that has started to change the country.

We just need to keep talking to each other.

Sports news, results and expert commentary. Sign up for our sport newsletter.