Melbourne coach Simon Goodwin says the Demons must become ‘a much more ruthless club” after his side’s final chances were all but dashed by Fremantle on Monday night in Cairns.

The Dees’ 14-point loss to the Dockers ended a miserable five-day spell for Goodwin’s team in Far North Queensland, with losses to Sydney and Fremantle moving Melbourne from the cusp of a finals berth to almost certainly out of the race with two matches to come.

It would be a second straight year out of the finals for Melbourne since their preliminary final run in 2018. Goodwin still has two years to run on his existing contract with the Dees, a deal signed months after that heavy preliminary defeat to West Coast.

Goodwin lamented his side’s inability to stand up when needed.

“We’ve put ourselves in a position now where we’ve got to rely on other results,” Goodwin said.

“As a club, I think we need to become a much more ruthless club, and really grow up and start to perform in these type of games. This is a great position for our club to be in, to experience this again after last year, but we need to start becoming more mature as a club and more unconditional in the way we go about our business. 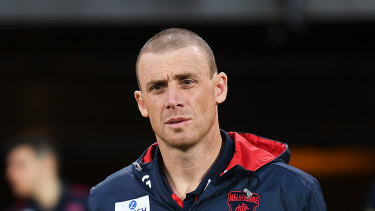 “It’s everyone in the club. I’ve always said this, we’re in this together. We’re trying to change shape as a footy club. To do that it takes a whole collective group of people to do that. We’re in this position, where we are, and we get the opportunity to continue to help shape that, but we can’t have results like tonight. I think when teams are really unconditional in the way they go about their footy, the way they go about their business, day in, day out, your method will stack up and you’ll get results, and we’re just not quite there yet.”

The Dees have matches to come against Greater Western Sydney and Essendon, but will need other teams above them to falter to even have a chance of making the eight.

“We need to put in better performances in all phases of how we play. Too often tonight, the variation and inconsistency across all phases of our game was off," Goodwin said.

“There’ll be a level of frustration I’m sure amongst our supporters, fans and everyone aligned, but we’re going to work incredible hard to make sure we put together some strong performances in the last couple of weeks.”