Nathan Buckley says Collingwood’s best football is good enough to beat anybody in 2020 after the Magpies mauled Carlton in the second half at the Gabba on Sunday to stay in the thick of the finals hunt.

The Pies face Brisbane at the same venue this Friday and Buckley is bullish about what Collingwood can produce against the Lions after beating their arch-rival with “the strongest performance we’ve put together in the last five or six weeks”. 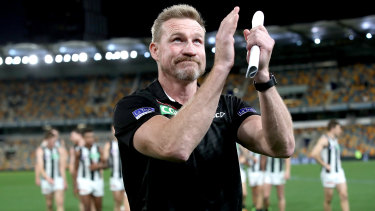 Back on track: Collingwood coach thanks the Gabba crowd after the win over Carlton.Credit:Getty Images

“We want to see that continue,’’ Buckley said.

“We believe that if we execute our brand, we’ll beat anyone. We’ve always had that confidence in the way we play.

“We’ve had to really grind out the last five to six weeks … pretty footy will get you so far, but it's the consistency of being able to stay in shape and win contested ball that’s really going to keep you in games.

“We use that as the basis of how we go about it. We want to be dynamic with the ball and we want to express ourselves and we saw more of that tonight, we’ll just keep taking steps forward.” 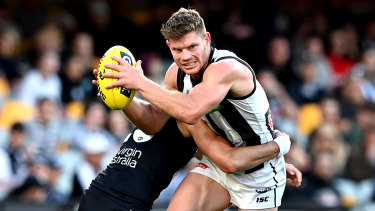 Run and carry: Magpie Taylor Adams attempts to power through a tackle during the win over the Blues.Credit:Getty Images

Buckley also took the opportunity at the end of his press conference to hit back at a newspaper column this week that highlighted he had not won an AFL flag as a player or senior coach.

“I just want to put on record that my life is very far from empty, I don’t have a flag, but I’ll be working towards it. It’s not going to define me, whether I get it or not. My life is very full,’’ he said.

“Some really good signs at times. At others we couldn't finish our plays,’’ he said.

“It's a tough one to swallow full stop in the sense we didn't play our way for four quarters. We saw some signs early that were good, but it shows we got a lot of improvement still to go and our ability to maintain and be consistent with that.

“It [the loss] leaves us ready to compete in four days’ time against GWS and that's what we'll do. We'll have a chat about it and be ready to go.”