Jamie Elliott admitted to his line coach Hayden Skipworth that the week after he kicked that match-winning goal against Essendon was emotionally draining.

Subdued in his immediate celebration as he unknowingly replicated former Magpie goal sneak Alan Didak’s post-goal cupping of his ear from the same spot in the 2003 qualifying final, he could not put the moment behind him. 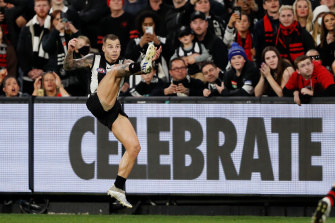 Jamie Elliott’s goal after the siren against Essendon will be remembered long after his career is over. Credit:AFL Photos

“He said it was quite an exhausting week for him compared to a normal week,” Skipworth said.

“He got a lot of responses and then every time it would pop up he would watch it and get a high from it and then come back down.”

That it did not affect his performance against Port Adelaide is testament to the professional approach Elliott is now renowned for, as he readies his body and mind for battle in a manner befitting a player who will play his 150th game on Friday night, as he nears the end of his 11th season.

As a small player with a fearless, sometimes reckless attack on the ball, he was battered with back and soft-tissue injuries that forced him to spend two frustrating seasons on the sidelines, including 2018 when the Magpies went so close to a flag. It had been a feature of his footy before he started at AFL level, as he suffered a serious shoulder injury playing a senior game with Euroa. 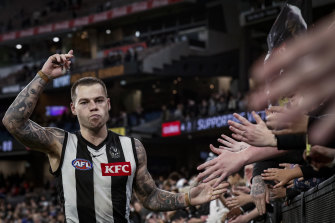 Despite that, he maintained his ballistic style, one that Skipworth said is impossible to change.

“He does crash packs and do things that he probably should not do at times and puts himself in those positions, but it is one of those things you don’t want to change too much,” Skipworth said.

The Magpies are 11-2 in the 13 games Elliott has played this season, and he is an understated star who keeps a low profile, with his impact on games and emerging teammates making him a favourite inside and outside the club.

“He is a very modest character who shies away from the limelight,” Skipworth said. 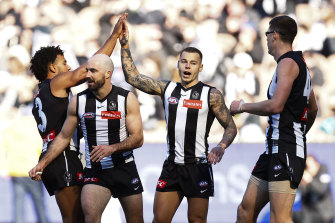 Born in Lorne, he spent time in Dongara in Western Australia and then Queensland before his mum, Fiona, and three siblings settled in Euroa after his father Gary died of cancer when Elliott was entering his teenage years.

Very close to his family and connected to his hometown, particularly, through his time at the local football club, he is a considered character who someone who knows him well says has “a big heart”.

Consistent with being a competitor who enjoys his own space, he is fond of gaming while he also enjoys travelling either solo or with friends, having covered much of Europe in his time. The hysteria that often surrounds football does not really catch his attention.

Melbourne and the Brisbane Lions chased him hard two years ago when he was a free agent, but he stuck with what he knew best, re-signing with the Magpies before a nice twist of fate occurred when Craig McRae was appointed coach as he entered the second year of the deal.

McRae had helped the emerging forward’s running patterns and crumbing skills when a development coach at the club 10 years earlier, so it was no wonder the coach’s voice was ringing in Elliott’s ears when he lined up for the post-siren goal.

The cool manner in which he approached that moment did not surprise Skipworth.

“He just took it upon himself. He did not shy away from the moment. That is the sort of character he is. He takes it upon himself. When the team needs something from him, he gives it to them,” Skipworth said.

“That can be going into midfield or centre bounces or playing deeper if we are struggling to score or playing high if we can’t get the ball through the mid arc.

“He can be Mr Fix-It. We can put him through various roles, and he competes at a high level in all those roles.”

Competing is what Elliott relishes, with his speed off the mark, ability in the air and willingness to apply pressure making him a nightmare match-up for the opposition.

There are few players with those characteristics, but he gives much off the field too.

Skipworth says much of the improvement that Beau McCreery, Ash Johnson, Oliver Henry and Jack Ginnivan have shown in 2022 can be ascribed to Elliott’s influence.

“He is certainly the leader within the forward line,” Skipworth said.

“Whether watching tape with them or explaining stuff through drills or on game day, he’s been a wealth of knowledge … I throw to him a lot in forward meetings. He can articulate things really clearly and give clarity to the group by the way he sees the game and explains the game. He can simplify it for them and give them live feedback.”

Elliott was the leading forward pressure player in the AFL in the first half of the season. He leads the club for ground-ball gets inside 50, marks on the lead, disposals inside 50 and tackles inside 50 and is second for score involvements and as an inside-50 target.

He will reach the 150-game mark without many individual accolades beside his name but his work ethic, resilience and the dynamic expression of his talent has made him a fan favourite.

And long after his career has ended, they will be still talking about that goal late on a Sunday in July.

Asked by Collingwood’s media team post-game where it ranked in his career highlights, Elliott’s response was honest and justified.