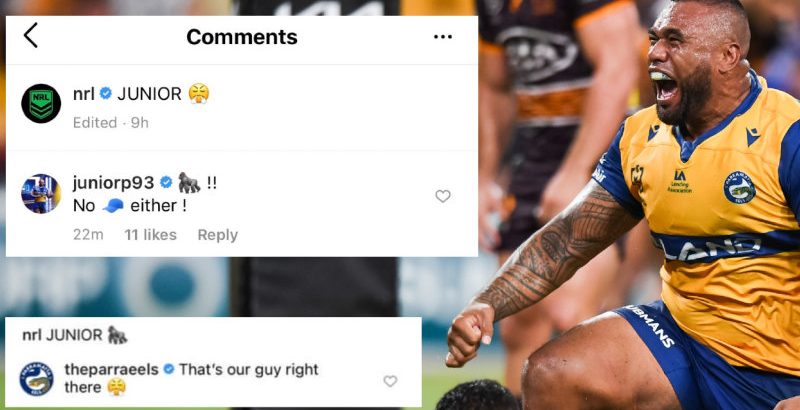 Some, including Parramatta officials, had taken offence to the NRL using a gorilla emoji to caption a photo of the hulking Eels prop after he scored the match-defining try in a come-from-behind win against Brisbane on Friday night. 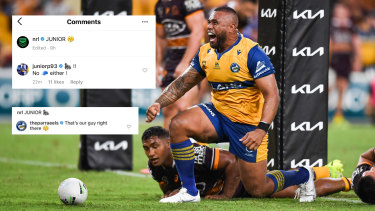 The image of Parramatta prop Junior Paulo that was published on Friday with the edited caption (top left) and the original caption (bottom left).Credit:NRL Photos

Abdo wanted to make sure Paulo, like some on social media who interpreted it as racist, wasn’t offended by a post that was meant to pay tribute to his strength.

Paulo, though, didn’t see it the way the NRL feared some would and have. Racist? Not according to the Samoan international. He reiterated to those outraged on his behalf that he was not offended by the post. 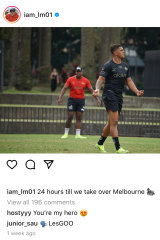 Neither were Latrell Mitchell, Tino Fa’asuamaleaui, Sia Soliola, Michael Jennings nor the NRL’s state of mind project officer Clinton Toopi – who all liked the original post with the gorilla caption.

Even the Eels’ social media staff replied to the NRL’s original post with “that’s our guy right there”.

Still, the NRL edited its post and removed the gorilla emoji on Friday night. It was replaced with a face-with-steam-coming-from-its-nose emoji to reflect the passion of Paulo in the image.

Yet Paulo was so strongly against the narrative being pushed – that the use of the gorilla carried racial connotations – that he replied to the NRL’s edited post the next morning with the same gorilla emoji the governing body had removed. He later removed the post, but it’s unclear whether he did so under the directive of the club.

The gorilla emoji has been used by athletes around the world as a symbol of power, often as a representation of “beast mode” – an aggressive, animalistic persona that one might assume when in competition or combat in order to overpower an opponent. Of course, the likening of athletes and primates in Australia has history, with the effects of the Adam Goodes-Eddie McGuire saga of 2013 still rippling eight years later.

Mitchell used the emoji just a week ago on the eve of South Sydney’s opening game of the season. So it begs the question, is it racism or political correctness gone mad? 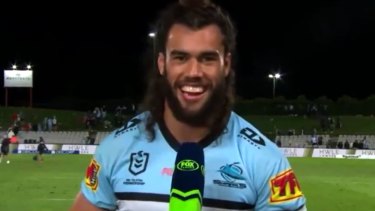 Toby Rudolf during his Fox Sports cross. He has been warned by the NRL for the contents of the interview.

In light of Cronulla prop Toby Rudolf receiving a formal warning from the NRL for saying he will sink “1000 beers” and then “try and pull something” at Northies Hotel, the governing body has come under fire from sections of the public who believe head office is overstepping the mark.

But there’s a feeling in the game, especially in relation to sensitive topics, that you are damned if you do and damned if you don’t. If Abdo and the NRL, or the Eels for that matter, had done nothing about Rudolf or the gorilla emoji, the governing body goes from a “politically correct organisation” to a sexist or racist one.

In the warning letter sent to Rudolf, he was encouraged to keep being himself and being funny, but reminded not to do so by being derogatory to certain groups.

As an organisation, the NRL has prided itself in recent years on its inclusiveness. Its push for equality among the gay and lesbian community has been reflected by the introduction of a float at Mardi Gras, the decision to acquire internationally renowned artist Macklemore to perform Same Love at the 2017 grand final, and the support for the same-sex marriage referendum by former chief executive Todd Greenberg.

The governing body has also all but shut the door on Israel Folau to play in the NRL because of his social media posts, maintaining its stance as an inclusive sport despite protests from some for excluding the dual international for expressing his religious beliefs.

It has also made it clear that it will not tolerate racial vilification towards or from its players. But if said players are using gorilla emojis to represent themselves, what leg do clubs or head office have to stand on for reprimanding staff or players from using it themselves?