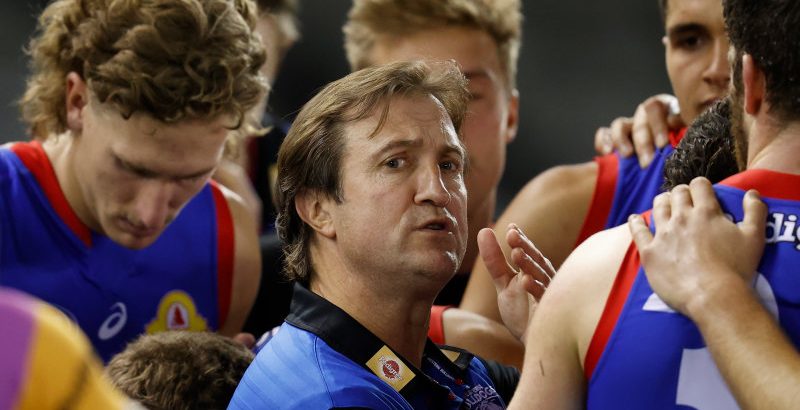 The Western Bulldogs’ top four exit has been as surprising as any football storyline in 2021.

For most of the season they sat in first or second spot, playing with a verve and attacking flair that matched the excitement surrounding their midfield, which was boosted by Adam Treloar’s off-season arrival. 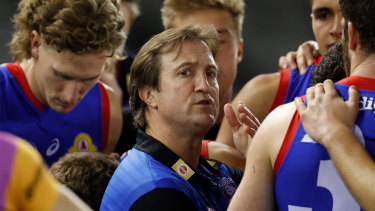 Luke Beveridge and the Bulldogs need to find their midfield swagger again.Credit:Getty Images

But after losing their last three games to Essendon, Hawthorn and Port Adelaide, Luke Beveridge’s side are not playing anywhere near the required level to win a second premiership in six seasons.

That drop off has been confronting to the naked eye and only looks worse when the statistical decline is laid out.

In those three losses – and the round 20 win over Adelaide – one of the Bulldogs’ strengths became a weakness. They were outscored, on average, by 20 points a game from stoppages (ranked 17th). Between round one and 19 they were ranked first in this measure, scoring on average 13.9 points more than their opponents.

This downward trend is clear in other key statistical markers too.

In that run of three losses Essendon have scored most heavily against the Dogs from stoppages (49 points more). That’s comfortably higher than Hawthorn (15 points more) and Port (seven points more). After finishing fifth, the Dogs play eighth-placed Essendon in an elimination final this weekend.

Beveridge can be one of the AFL’s more generous coaches when it comes to answering questions from reporters (yes, he can also be bristly). His answers on Friday night after the loss to Port help give context to the impact the statistics above are having.

He said the Dogs lacked fluency in their play, and were “chaotic” moving the ball, which meant they had to switch to defensive mode too quickly.

“We took a step in the right direction [early] there with the pressure,” he said. “[But] too many of our opportunities to distribute out of congestion were sprayed into space, missed teammates. We gave Port a look on the outside when it should have been in our hands and then had to defend the whole ground and that really put us under the pump. We used up a lot of energy defending inside 50s that shouldn’t have happened.

“I thought our backline held up really well … we only got rolled on those open plays when we did cough it up, or they came out [of] the open from an intercept out of a stoppage.”

Possessing the ball in the midfield more than the opposition, and then using it creatively moving forward, was key to the Bulldogs’ success this season. So was winning it prolifically in the clinches.

That clear and damaging purpose in possession and skill at winning it first has deserted the Dogs since round 20.

Marcus Bontempelli is a top chance for the Brownlow Medal, but he has dropped off later in the season. His midfield teammates have too, and it is reflected in the numbers and on the win-loss ledger.

This has put the defence under pressure and has led to the forward line having lower supply. Josh Bruce’s absence has exacerbated the forward line struggles, not caused it. Jamarra Ugle-Hagan was “managed” for the Hawks game and not selected to play Port.

Beveridge decided English could provide more forward than he could in the ruck, given Stefan Martin is not ready to play despite being over his injury (and by the sounds of it is nowhere near certain to play Essendon).

“Those hit out numbers are close to what we face every week,” Beveridge said. Essentially, he doesn’t rate the hit out stat, or having a dominant ruck, as vital.

Even still, surely Jordan Sweet comes into the elimination final frame if Martin – who got through a scratch match this weekend – isn’t picked because his body isn’t conditioned for a finals clash. Josh Schache is also an option. Something around the ball needs to change.