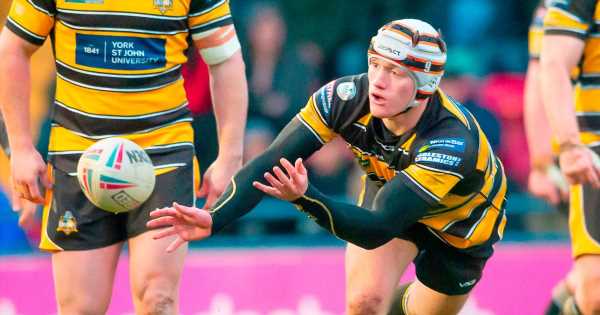 Playing with one eye has never held Will Jubb back from achieving his rugby league dreams.

Now, as York City Knights prepare for rugby league’s first competitive game of the year, he wants to pass that ethos onto partially sighted youngsters in the Minster City.

Jubb was just two when he had his right eye removed after being diagnosed with retinoblastoma. But his family were determined it wouldn’t prevent him from playing sport – and after taking up rugby at 10, he progressed through Hull KR’s ranks before switching to the ambitious Knights.

Now he spends his spare time volunteering with local sight loss charity the Wilberforce Trust and aiming to show others in similar situations that vision impairment doesn’t have to restrict them. Hooker Jubb, 24, explained: “I had cancer in my right eye when I was two and had the eye removed.

“When you take a picture and your eye goes red, mine went white and my mum spotted it and took me to the doctors. I can’t remember what it was like having two eyes, I grew up not knowing anything else.

“We went to the National Artificial Eye Service and they were absolutely brilliant – basically the eye looks exactly real, you’d have to have a proper look to see it. I had my family throwing a ball at me, especially my dad, all the time when I was little and I just got used to it.

“I didn’t play rugby at first, it was always football, but my brother was playing so I gave it a go. Sometimes there were times I couldn't see somewhere, but you learn to turn your head more and take more of a look, and adapt as you learn. Basically you’re trying to stop yourself getting hurt!”

Jubb hopes his work with local youngsters can inspire them to set their goals high, but before that he has a Challenge Cup clash with Sheffield Eagles to focus on Friday night as rugby league returns.

The Knights have signed a host of established Super League names like Adam Cuthbertson, Ben Jones-Bishop and Danny Kirmond as they look to pursue their own top flight aims.

But Jubb won’t be underestimating the Eagles at the start of this year’s road to Wembley. He added: “Sheffield are a well established side – they always give you a good game and have some dangerous players.”