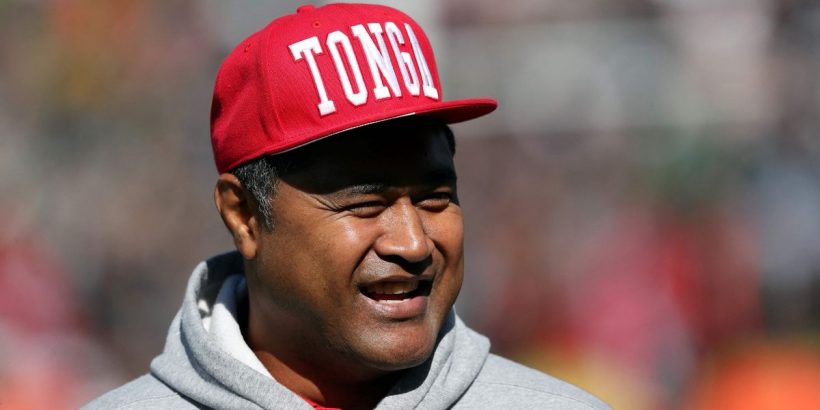 Toutai Kefu and his son, Josh, are “recovering well” after each sustained stab wounds during the home invasion that also saw the Australia legend’s wife and daughter suffer serious injuries.

Tonga head coach Kefu was in critical condition after being stabbed multiple times in the abdomen—and once in the liver—in the early hours of Monday morning.

Members of the Kefu family reportedly found three intruders donwstairs in their home after hearing a disturbance.

The former Wallabies No. 8 suffered life-threatening wounds during the attack, but one of his unharmed daughters, Olivia, posted on Facebook updating friends on the family’s condition.

"Both Josh and Dad had their surgeries yesterday (Monday) and are recovering well. Madi and Mum will have their operations this morning (Tuesday),” she wrote.

"Thank you to everyone for all the kind messages and support, it means the absolute world to us all.”

Queensland Police found an axe and a knife at the Brisbane residence, where neighbours reportedly helped apprehend one of the culprits after hearing the disturbance.

Queensland police said they believed the weapons recovered were used in the “burglary gone wrong,” but a machete also suspected to have played a part in the attack was still missing.

Two 15-year-old boys were arrested on Monday in relation to the attack, one of whom was the subject of a long list of charges. These included four counts of attempted murder, three counts of assault causing grievous bodily harm and one count of unlawful use of a motor vehicle, deprivation of liberty, burglary and breaking and entering.

Another 13-year-old boy arrested on Tuesday was refused bail and appeared at the Brisbane Children's Court, where he was remanded in custody and told to re-appear on Friday.

Kefu earned 60 caps for Australia and made more than 100 appearances for the Queensland Reds before joining Japanese club Kubota Spears, whom he later went on to coach.

Tributes flooded in for Kefu and his family following news of Monday’s horrific home invasion, with the Wallabies’ official Twitter account posting a heart emoji with the caption: “You got this great man!! All our love and thoughts to you and the entire Kefu family!!”

Former New Zealand star Sonny Bill Williams also joined in the well-wishes, writing: "Thoughts and prayers are with my Tongan brother Toutai Kefu and his family.”

A message was also written on the floor outside the entrance of a Coorparoo business believed to be owned by the Kefu family, which read: “Stay strong. We are with you. You are loved.”

The 47-year-old was appointed Tonga’s head coach in 2016 and helped take them to the 2019 Rugby World Cup, where they defeated the United States and suffered a narrow 23-21 loss to France.

He also helped his adopted nation win the Bledisloe Cup for five straight years, as well as taking Australia to a series win over the British and Irish Lions in 2001, their first in more than 70 years.