The Brumbies and Queensland Reds hope they've created a turning point for Australian rugby after delivering a sharp one-two punch over the weekend.

Positivity has been in short supply through the first three rounds of Super Rugby but that changed in Hamilton when the Brumbies shrugged off a week of illness concerns and conjured a sublime first half against the previously unbeaten Chiefs. 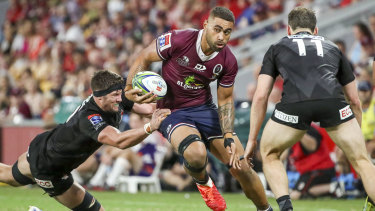 Lukhan Salakaia makes another charge for the Reds against the Sunwolves.Credit:AAP

"Over the last two years, I've spoken to the group about bucking the trends and creating some positivity so that people are talking about good things in rugby union and not the negative things," he said.

"There's so many people in our game who enjoy bagging our game.

"From a Brumbies point of view, we're obviously very happy and we're all moving forward now."

Veteran James O'Connor shone in a far easier playmaker assignment for the Reds, putting teammates into gaps at will in the 10-try romp.

While the level of opposition was questionable, it didn't stop Reds coach Brad Thorn from hailing the raw potential in his young side after three relatively close losses on the road.

"I think they can be a very good team now.; I've said to the team 'there's a good team here, you've just got to realise that'.

There was little to enthuse over from Melbourne besides another barnstorming display from their Wallabies back-rower Isi Naisarani against a Sharks side who will be a handful for the Reds this week.

The Stormers are the only unbeaten team in the competition after holding out the Jaguares 17-7 in Cape Town while the travelling Blues pulled off a late 23-21 defeat of the Bulls.

The Crusaders beat the Highlanders 33-13 on Friday.