England 15-16 New Zealand: Eddie Jones’s side suffer narrow defeat by No 1 side in world after a 15-point lead and Sam Underhill’s late try is ruled out

Eddie Jones told his players to write their own Hollywood movie but they came up with a classic heartbreak story.

England were inches away from a famous victory at Twickenham.

Sam Underhill thought he had scored the winning try after 76 minutes, but referee Jerome Garces interrupted the joyous celebrations to rule out the match-winning score. 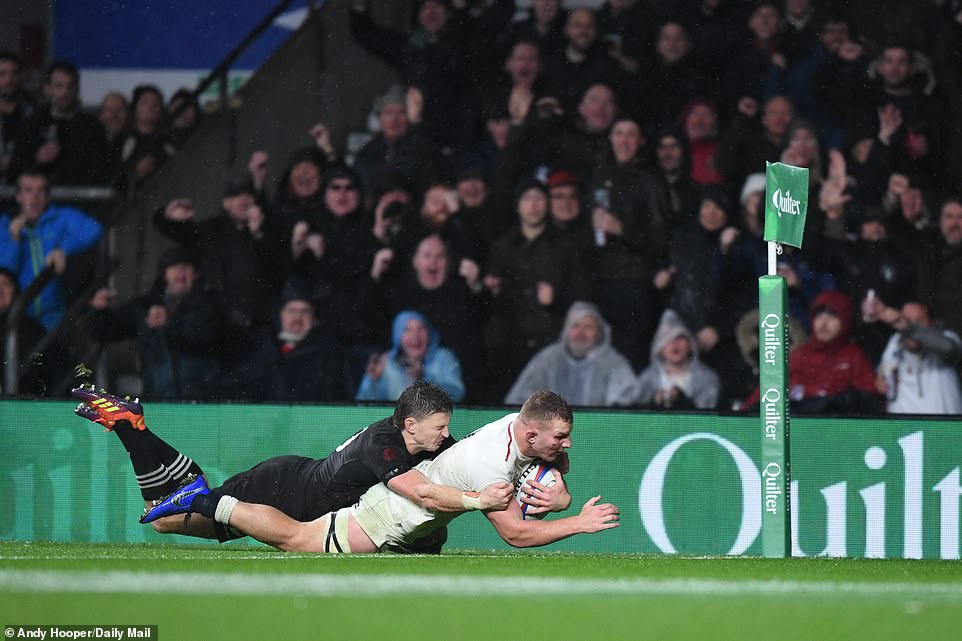 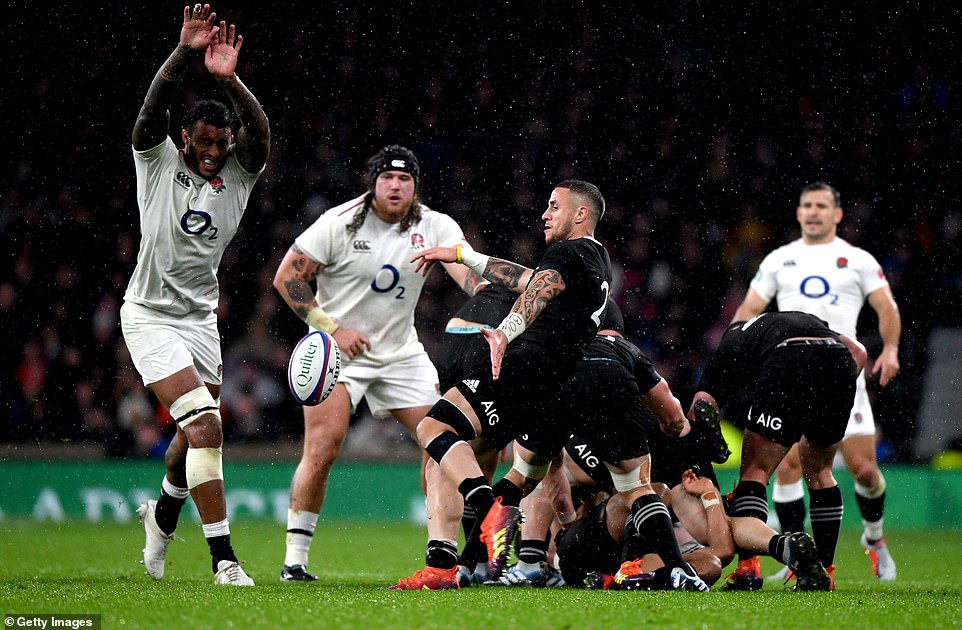 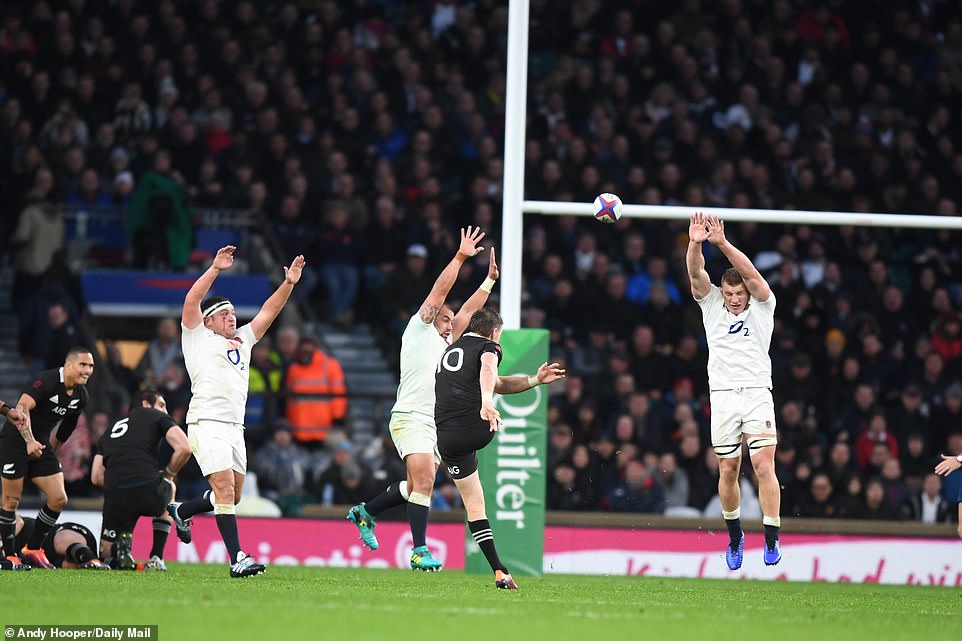 In the end, the result went to script. Make that 84 wins in 94 Tests for the All Blacks under Steve Hansen, whose side remain top of the tree.

The Kiwis are still No 1, even though they trailed for an hour, and Jones’s players will clutch at hope in defeat.

‘Roll up for the execution!’ heckled Kiwi fans at ticket touts outside Twickenham station before kick-off. 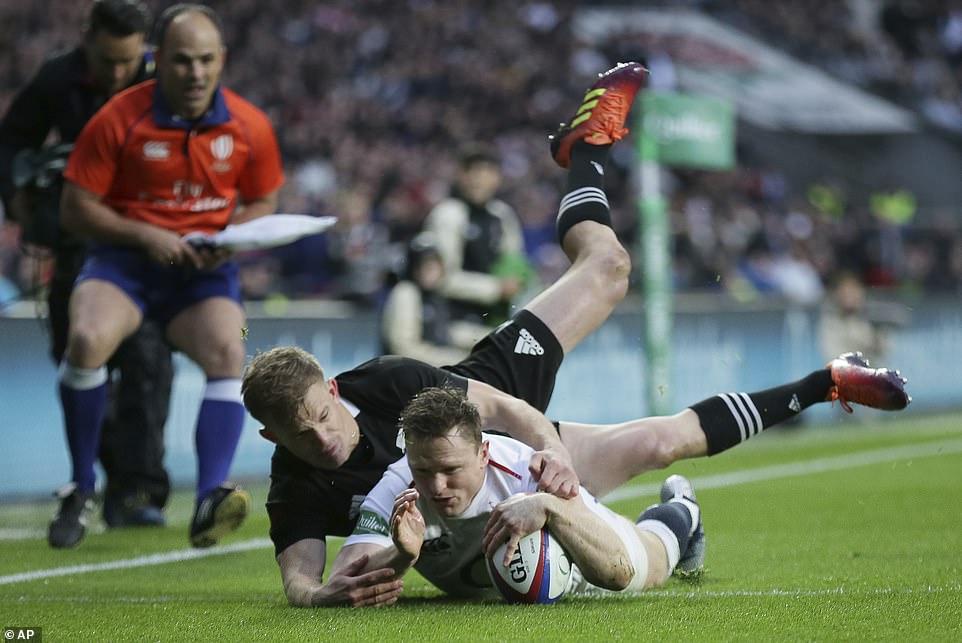 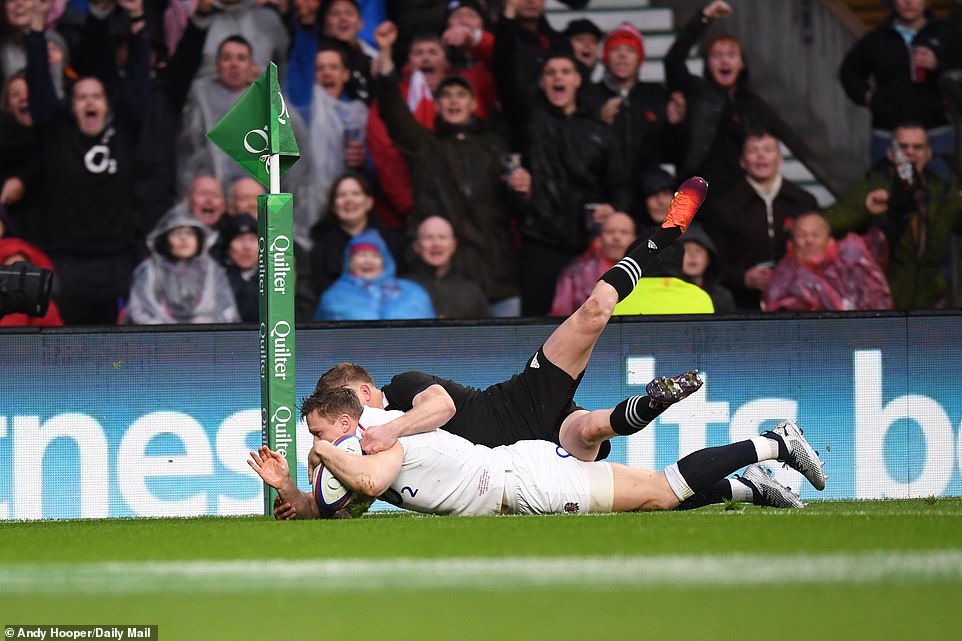 Ashton, who made his first start in four years for England, went over within the first few minutes after pass from Ben Youngs 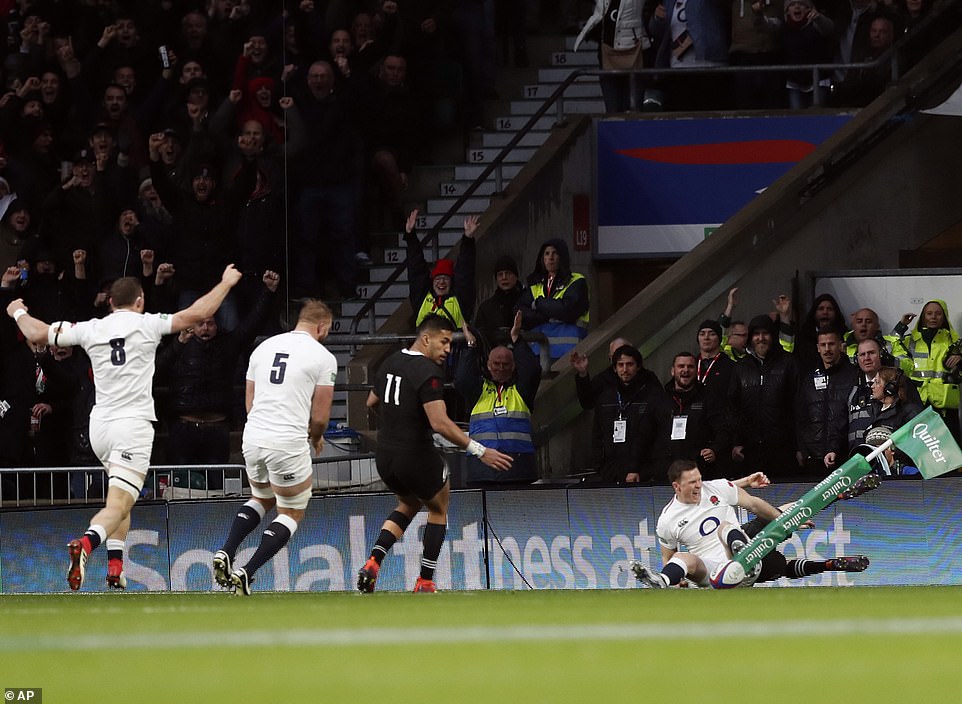 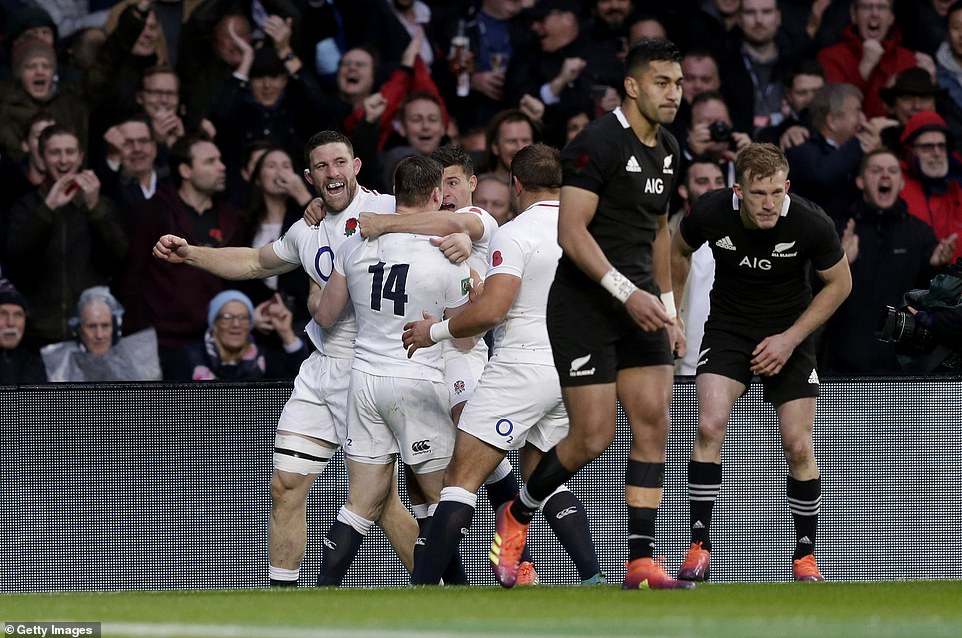 The belief and expectation of the English public has evaporated in recent months, but the players felt differently.

Weather conditions were similar to the famous night in Wellington last year, when the Lions beat the All Blacks. Torrential rain fell on the haka… Fate?

The sound of Swing Low drowned out the Kiwi war dance and, once finished, the England players got into a huddle and made their opponents wait for kick-off.

They did things on their terms and it remained that way for an hour. 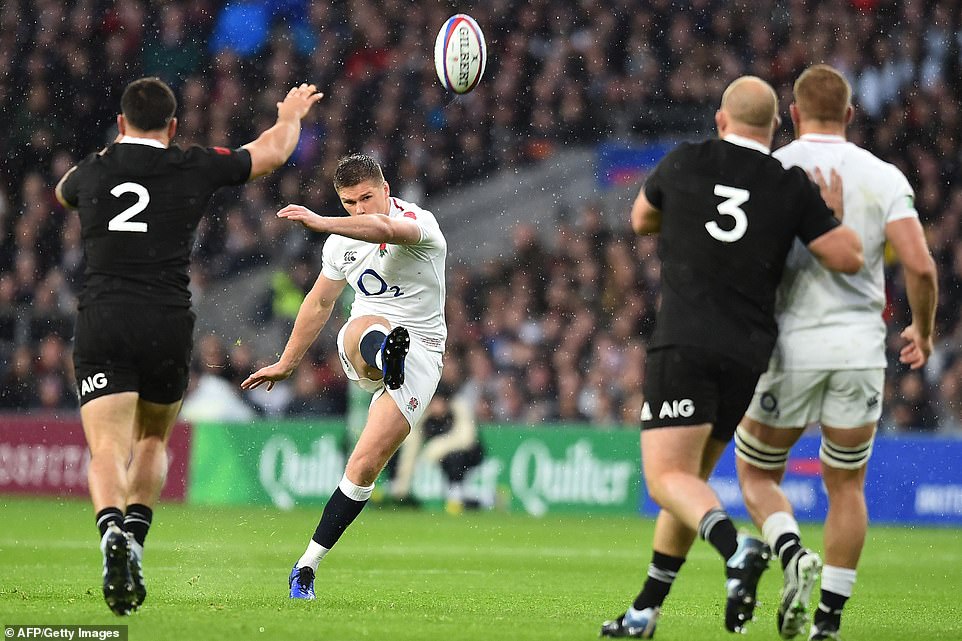 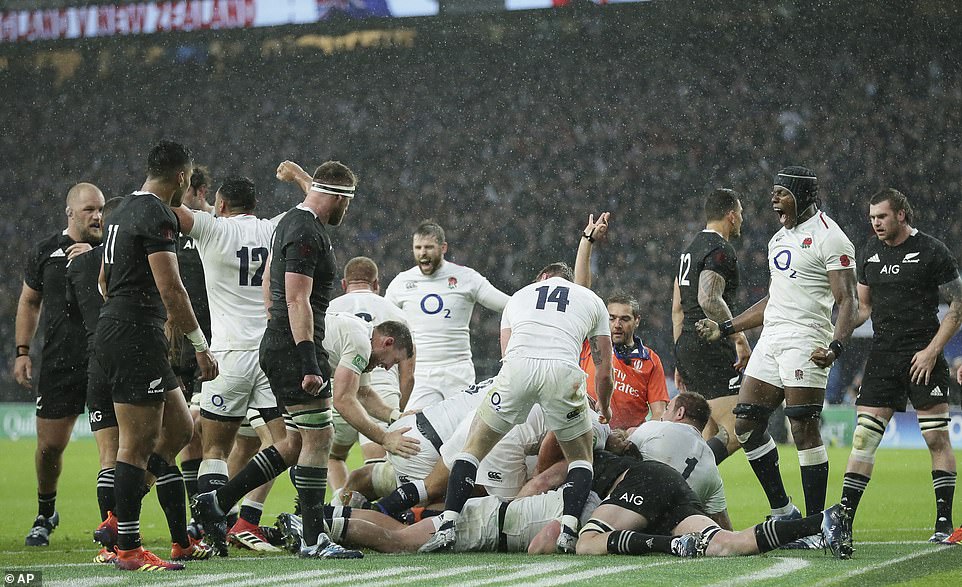 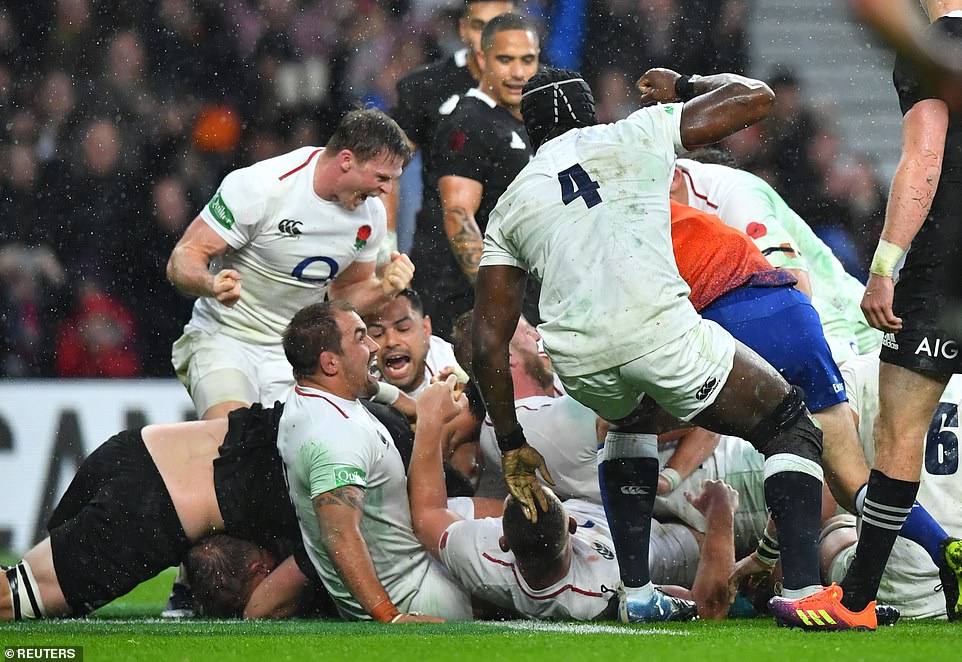 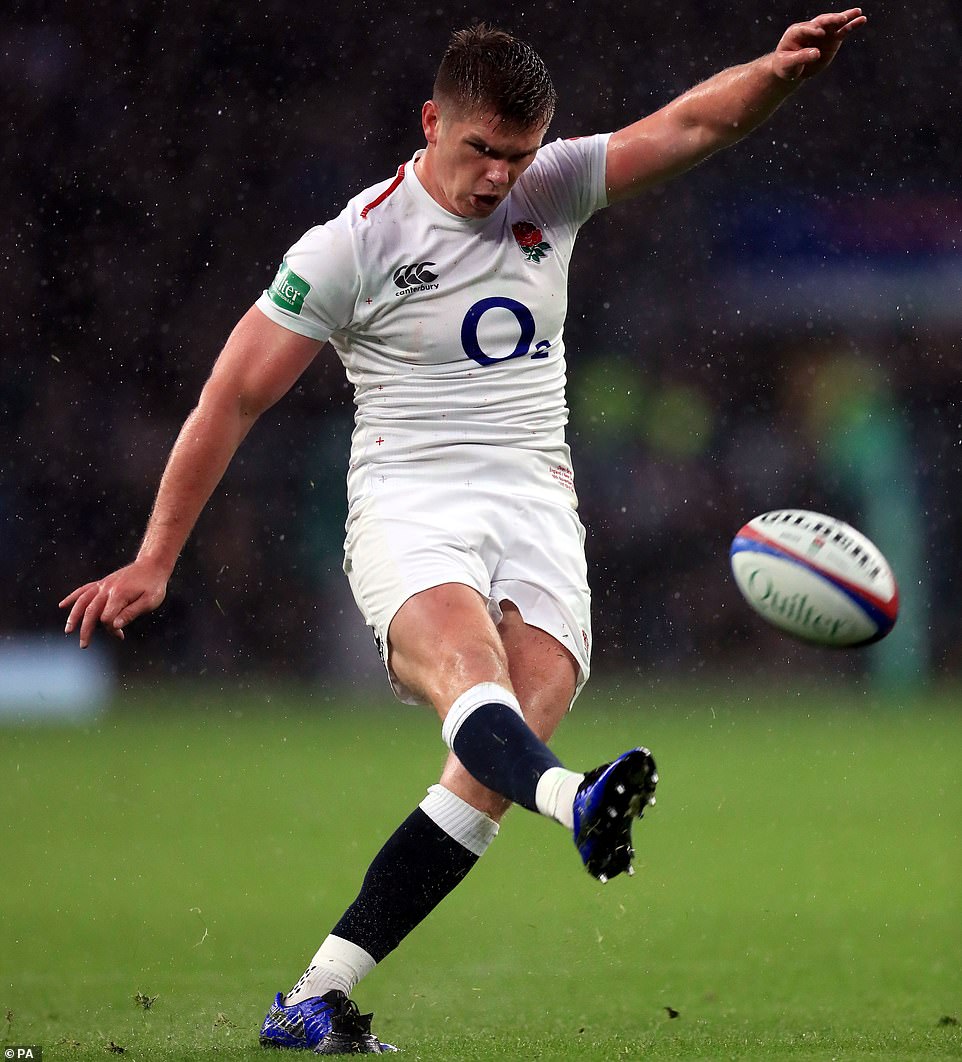 Owen Farrell kicked off and landed the ball on Brodie Retallick. Jonny May gave chase and the Kiwis knocked the ball on in the very first play.

‘Get in their faces,’ said the handful of Englishmen who have been there and done it.

Chris Ashton sniffed space on the right wing and, with one minute 54 seconds on the clock, he took Ben Youngs’ long pass to slide over for the opening try. 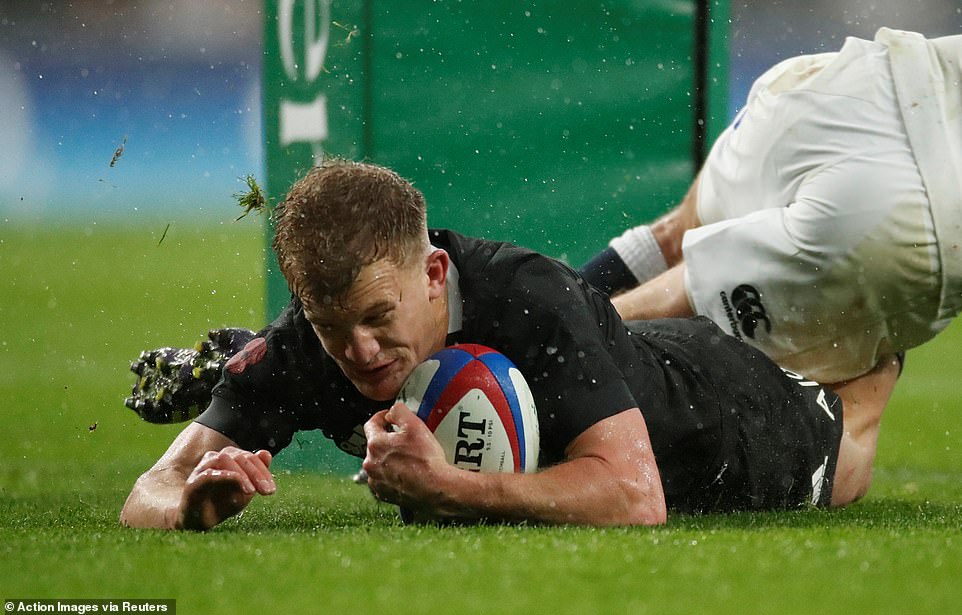 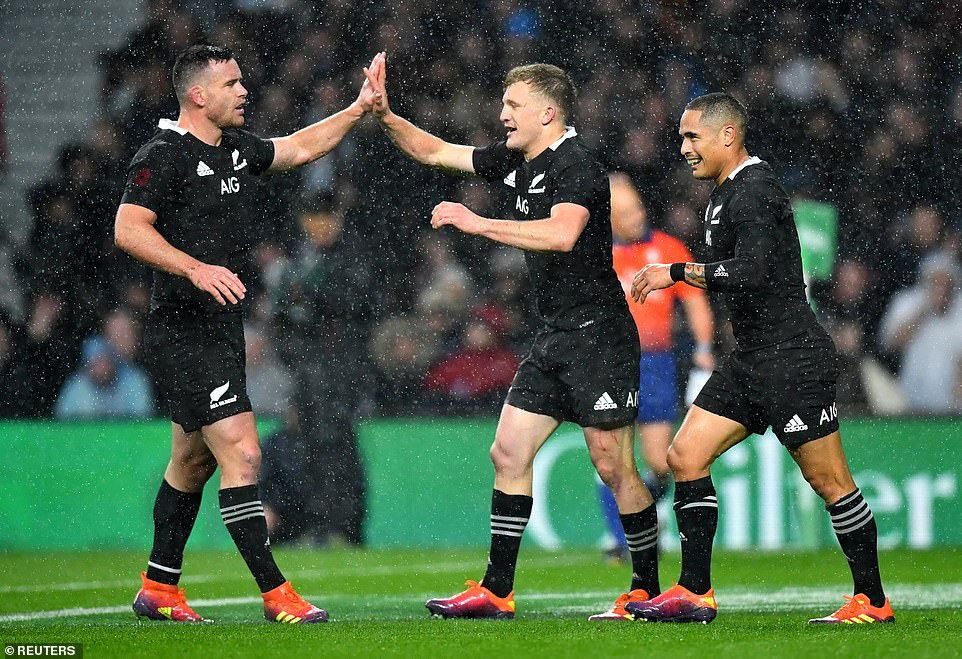 ‘Get to Shieldsy,’ shouted the Kiwi defenders as they tried to rattle England’s Kiwi flanker Brad Shields early on.

England, however, were not unnerved.

Rain continued to fall and England played the conditions. Te’o put the ball up the jumper and England’s play-makers peppered Damian McKenzie with difficult kicks.

Farrell missed his first conversion but, after 10 minutes, he took his side eight points ahead with a drop goal. 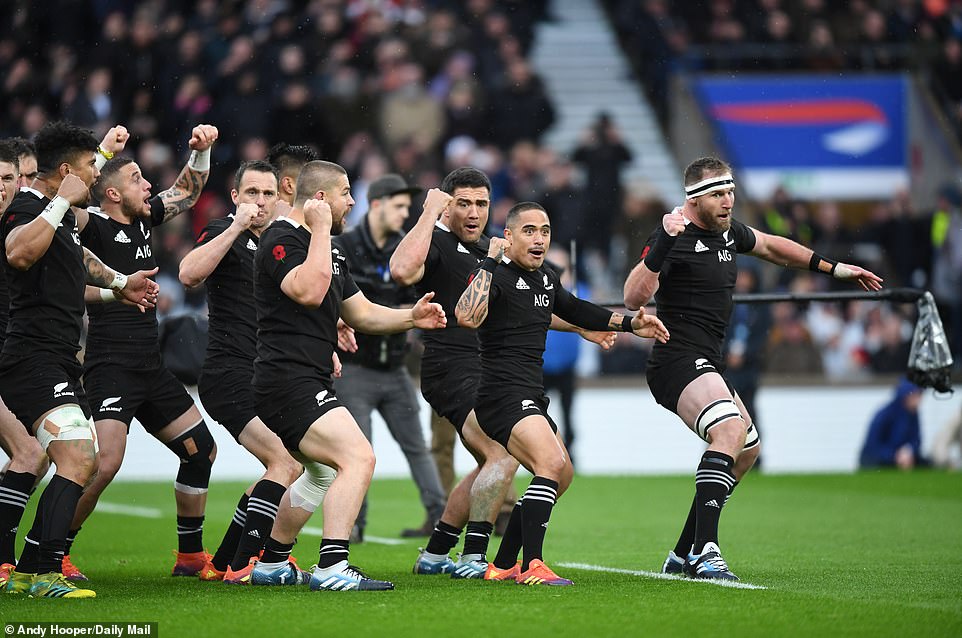 Sam Whitelock knocked on at a lineout under pressure from Shields and England turned their territory into points.

Ardie Savea was stripped in the tackle, Beauden Barrett was caught offside and Aaron Smith kicked the ball straight into touch.

Underhill tackled like a man possessed, with blood streaming down his right cheek, and the scoreboard kept ticking in England’s favour.

Maro Itoje claimed a lineout. The maul crabbed sideways but gathered momentum. England’s backs piled in and Dylan Hartley touched down to make the score 15-0. 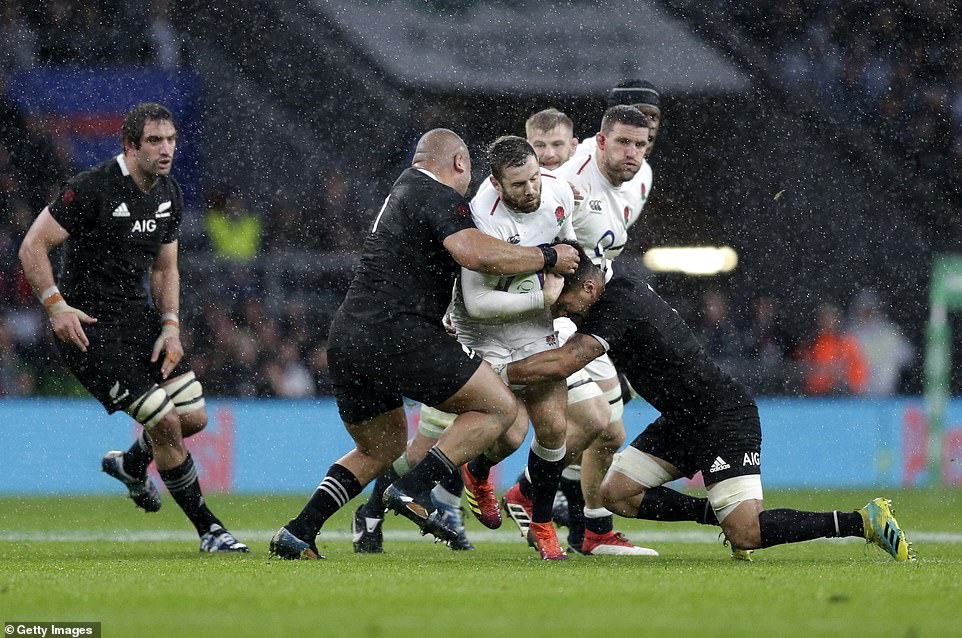 Twickenham had not seen such intensity since the 2015 World Cup. England had never seen anything like it under Eddie Jones.

Sonny Bill Williams left the field through injury, which seemed like another good omen, but his replacement Ryan Crotty made an instant impact.

Determined to score before half-time, New Zealand launched a 23-phase attack and won a penalty in front of the posts.

Their decision to scrum rather than take three points whiffed of arrogance, but Crotty ran a hard line, before McKenzie cut a line off Barrett’s inside shoulder to score the first Kiwi try. 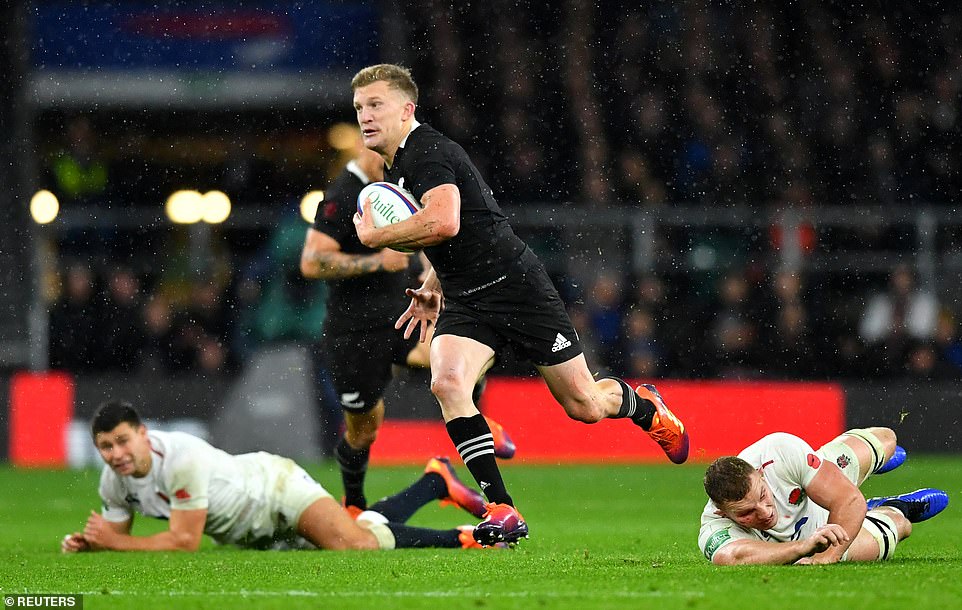 Barrett kicked another penalty before half-time and suddenly, under grey skies, the complexion changed.

Jamie George replaced Hartley at half-time but the Kiwis came out flying. Like a fly in a bottle, McKenzie broke the line early on but Savea knocked on with the try line in sight.

Rieko Ioane failed to gather a pass on his wing but, following Farrell’s earlier lead, Barrett kicked his first drop goal in 72 Tests.

England’s killer edge of the first half deserted them. In a bold move, Farrell turned down a shot at goal for a lineout, but Sinckler knocked on.

Suddenly England lost five lineouts on the head and momentum swung around the hour mark. 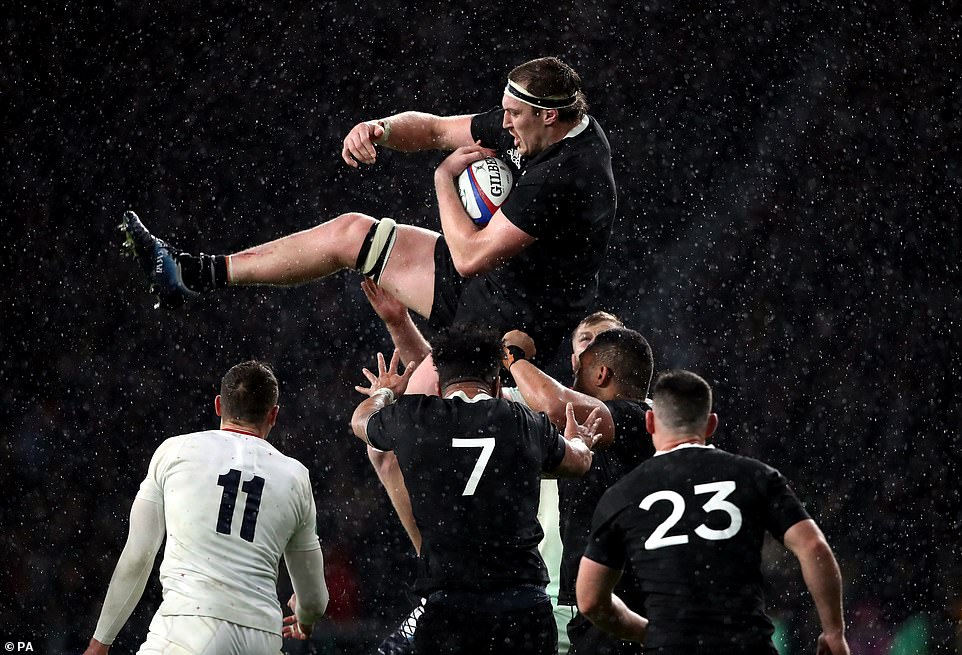 Even the most basic statisticians had worked out that New Zealand have a knack of winning games in the final quarter.

Coming into this game, they had an aggregate score of 141-42 in the final quarter of games in 2018. And lo behold, in the 60th minute, Barrett kicked his side ahead for the first time in the match.

Jones threw on his own ‘finishers’, but George’s lineout throwing cost his side dearly. England fluffed their lines consistently, until Underhill’s late break.

The flanker turned Barrett inside out, before diving over in the corner, but Garces deemed that Courtney Lawes was offside when he charged the ball down.

England attacked again, but Henry Slade knocked on in the final play. And with that, came the editor’s cut.