London: England's star back-rower Billy Vunipola could face sanctions after he appeared to back an Instagram post published by Israel Folau in which the Wallabies fullback made homophobic remarks.

Folau said on Wednesday that "hell awaits" homosexuals in comments that have resulted in Rugby Australia stating it plans to terminate his contract. 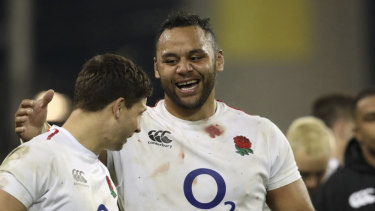 In an apparent show of support to his fellow Christian, Vunipola has declared in his own Instagram post that "Man was made for woman to pro create that was the goal no?"

Vunipola could face disciplinary action from the Rugby Football Union in response to the anti-gay position outlined in his post.

"So this morning I got 3 phone calls from people telling me to 'unlike' the @izzyfolau post. This is my position on it. I don't HATE anyone neither do I think I'm perfect," the Saracens back-rower said.

"There just comes a point when you insult what I grew up believing in that you just say enough is enough, what he's saying isn't that he doesn't like or love those people.

"He's saying how we live our lives needs to be closer to how God intended them to be.

"Man was made for woman to pro create that was the goal no? I'm not perfect I'm at least everything on that list at least at one point in my life. It hurts to know that.

"But that's why I believe there's a God. To guide and protect us and forgive us our trespasses as we forgive those who trespass against us."