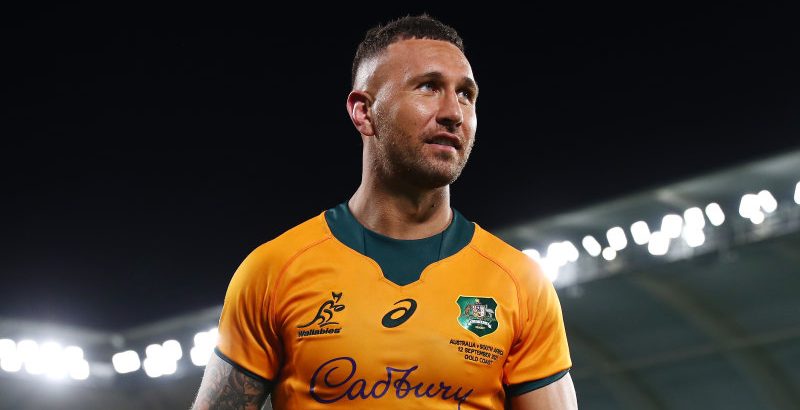 Quade Cooper wound back the clock and sprinkled some magic dust to kick a penalty after the siren and seal a fairytale comeback by helping Australia beat the reigning world champions on Sunday.

The divisive No.10 kicked seven from seven off the tee for a tally of 20 points before a final kick that will live long in the memory to help Australia prevail over South Africa 28-26 on the Gold Coast.

Cooper had a kick from 40 metres out, on the angle, after the siren to seal a victory for the Wallabies.

With ice in his veins, Cooper slotted it perfectly. In terms of fairytale returns, there surely have been none greater in Australian rugby history.

The Wallabies played superbly to lead 22-14 in the 58th minute but conceded a try seconds after Folau Fainga’a went to the bin for a no arms tackle.

Then, leading by four points, Australia conceded a rolling maul try in the 72nd minute as South Africa regained the lead. This was as good as it gets. 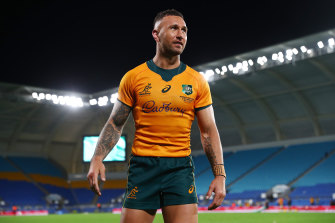 Quade Cooper was sensational in his first Wallabies game in more than four years.Credit:Getty

Australia’s thrilling victory was the most important of Dave Rennie’s Wallabies tenure and tangible evidence the team is heading in the right direction.

The World No.1 Springboks, who won a World Cup two years ago and came to Australia with a famous British and Irish Lions series victory under their belt, were tenacious yet seriously tested.

This Test was always going to be about Cooper after the boldest Wallabies selection in a decade.

The adage that experience cannot be bought applied in every way to Cooper, whose calming influence was a huge bonus for a Wallabies team coming off three All Blacks defeats. 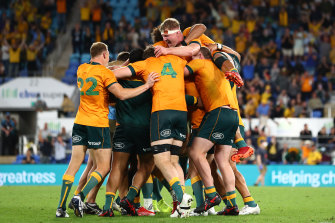 The Wallabies celebrate their finest performance of the Dave Rennie era.Credit:Getty

The 33-year-old, after 1541 days without a Test to his name, never looked flustered and importantly, kept the scoreboard ticking over just as the South Africans pride themselves on doing to others.

His performance certainly warranted the lifeline thrown his way by coach Dave Rennie.

With Australia up 19-11 at half-time, Cooper was animated. He delivered advice to teammates in the sheds, almost in a coach-like manner, desperate to make sure plans were in place to build on an auspicious first 40 minutes.

There were other sub-plots in this gripping Test match, notably that of Angus Bell’s first start at Test level. 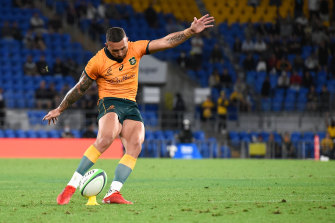 Cooper lines up the match-winning penalty on the Gold Coast.Credit:Getty

Bell, the 20-year-old, went to ground in his first scrum but was part of the front row that won a critical penalty just before half-time, with the Springboks camped on their line, to put Australia ahead by eight points.

Michael Hooper was immense, Samu Kerevi showed his class, while every Australian forward put in a huge shift.

Cooper got his first touch after 32 seconds, defending at the back. He then had a couple more in the seventh minute to work into a rhythm.

He nailed two early penalty attempts – plus a deft chip kick out of the blue – to keep Australia level at 6-6 after 14 minutes.

Siya Kolisi found himself lucky not to be red-carded for a dangerous lift on Tom Banks yet the Wallabies made the most of the player advantage when Andrew Kellaway sliced through for his fourth Test try.

Kellaway’s ability to finish tries has been phenomenal this year but his five-pointer couldn’t have come to fruition without a ball out the back from Cooper and classy step and pass from Kerevi.

Just as Kolisi came back on, Australia lost Matt Philip for 10 minutes and conceded a try moments later to a driving maul.

Nic White pulled off Test rugby’s first 50-22 kick but the Springboks refused to go away in a violent second half that will be remembered for Cooper’s magical kick at the death.