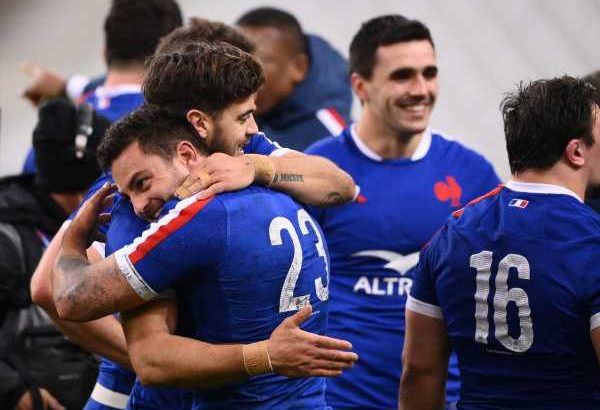 The strangest Six Nations and the strangest game. A topsy-turvy, controversy-filled contest that spilled to a messy conclusion reflected a tournament of incident and action, and it was France who remained standing at the last – Wales’ hopes of a fifth Six Nations Grand Slam disappearing into the Paris night.

To conclude the final, breathless coda of a match that had it all, it was Brice Dulin’s gleeful shout to be heard last as the full-back dived over in glee. The heads dropped as the Welsh defenders, fatigued by the contest and condemned to their fate, and dragged hither and thither in France’s final, decisive movement, tried desperately to get across; there was to be no final twist.

Not that the game lacked drama. Dulin had earlier played a prominent role in what had appeared the game’s pivotal moment. The full-back’s score seemed to have narrowed France’s deficit to five with a conversion to come 13 minutes before full-time, but a check with TMO Wayne Barnes revealed Paul Willemse’s wandering hand in the proximity of Wyn Jones’ eye. After a lengthy deliberation, referee Luke Pearce was convinced it could only be red – try chalked off, Willemse sent off.

That was, unbelievably, to be only a prelude to a final ten minutes of remarkable drama. It meant that for a third time this tournament Wales would finish against 14, but it was France who would finish with a numerical advantage as Taulupe Faletau and Liam Williams each saw yellow.

Spaces, therefore, opened for France. Charles Ollivon profited after back-row colleague Gregory Alldritt was somehow stopped shy of the line launching from the back of the French scrum, Romain Ntamack’s conversion taken France to within three. And then Dulin’s final try, the seventh and final of the game, and a 32-30 scoreline that only partially tells the story. 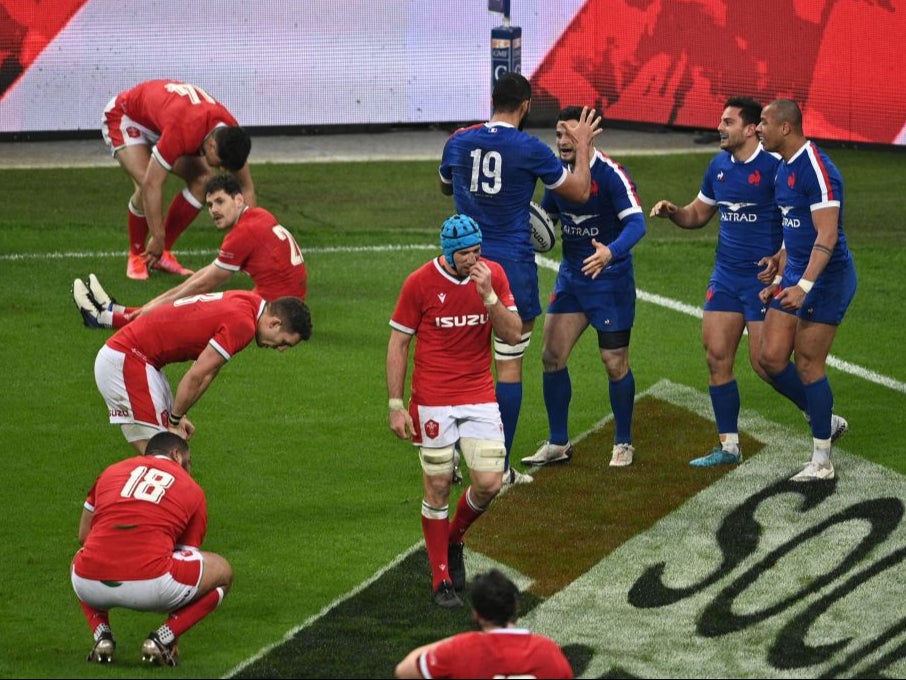 Players react at the final whistle

As they had against England, France began quickly in another 10 minute opening to test the lungs. After Dulin had lifted a penalty into the corner, Gregory Alldritt was dragged down just shy of the Welsh line rounding the corner after a nifty lineout move. Paul Willemse’s giant frame was propelled to within inches; the burrowing Romain Taofifenua found the final foot for the score.

Yet, just as a week ago, France’s sweet tune invited their opponents into the dance. The width of Charles Ollivon’s hand was all that prevented Gareth Davies scoring within three minutes of France’s opener, but the reply came soon enough after, the eventual final barge of the battering ram to beat down the door provided in the unlikely form of Dan Biggar on the crash ball.

The first-half’s true moment of magnificence would come from the French, however. Dulin advanced with menace after a loose Welsh kick, flanked by Matthieu Jalibert and with Antoine Dupont lurking. Dulin’s delightful left-footed chip bounced kindly for his fly-half, and the swift transfer to Dupont allowed the effervescent scrum-half a comfortable canter over.

There was time yet in the opening quarter for Wales’ to level again as Josh Navidi squirmed over to again level things up. It was no more than they deserved: with France curiously passive in defence, the Welsh attack was invited to play flat and with tempo, the outstanding Biggar setting a percussive rhythm with wingers roaming and forwards arriving with intent.

A penalty apiece before half-time followed as the game briefly settled into a more adagio tempo, but after the interval incident again erupted. Wales’ seized momentum with a penalty and then extended their lead to ten, Josh Adams controversially decided to have managed to get the ball past Dylan Cretin’s hand to the turf as the pair tumbled over after Justin Tipuric’s grubber through and Tomos Williams’s sliding toe on.

Welsh hopes for the Grand Slam were strengthened further eight minutes later when Mohamed Haouas saw the first card of the game, the prop perhaps fortunate that Pearce could not be sure a try would be scored as he cynically felled a Welsh maul with pistons pumping. Biggar added three, and the Welsh lead was again ten.

And then, the final quarter, and all the drama that came, game progressing with relentless energy from hold-up to hold-up like a heist film. Six Nations victory may yet be Wales’, with France having to beat Scotland with a bonus point in the delayed denouement to this year’s competition and seal triumph. For now, though, Wayne Pivac’s side must reflect on what might have been.