Moana Pasifika have made their first star signing, with former Wallabies playmaker Christian Lealiifano set to join the new Super Rugby franchise for its debut season.

The Herald can reveal Lealiifano is set to be announced as the club’s franchise star as early as next week. 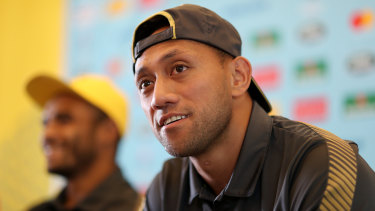 Sources with knowledge of the situation told the Herald the new, Auckland-based franchise beat Lealiifano’s former club, the ACT Brumbies, to the 34-year-old’s signature.

Lealiifano last played for the Wallabies at the 2019 World Cup, where he started at five-eighth in Michael Cheika’s final match as coach – a quarter-final defeat to England.

His rise back to the top of the playmaking tree within Australian rugby capped a remarkable comeback, as his career appeared to be over when he was diagnosed with leukaemia in 2016.

Following successful treatment, Lealiifano signed with Irish club Ulster, before returning to the Brumbies and eventually, the Wallabies. 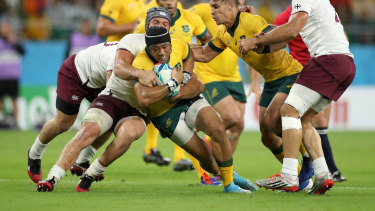 Chrisitan Lealiifano played at the 2019 Rugby World Cup just three years after his career appeared due to being diagnosed with leukaemia.Credit:Getty

He has plied his trade for Japanese Top League club NTT Communications Shining Arcs in the two years since the 2019 World Cup, but sources with knowledge of the discussion said the former Brumbies captain was eager to be closer to friends and family.

The coach who made Lealiifano Brumbies captain in 2019, Dan McKellar, told the Herald the 34-year-old would excel at the foundation franchise.

“He’d be a great addition to the Pasifika side. He’s a proud Samoan man,” McKellar said.

“A new club, having a leadership role and a mentoring role and establishing what that club stands for, obviously with his own strong ties with his Samoan and Pasifika background – he’s going to love that challenge.

“He still has a lot to offer, there’s no doubt.”

McKellar believes there is no player better placed to lead a team that is about to be thrown into the deep end in the world’s best club competition.

“He’s a great captain, leads through his actions and he’ll have a real presence on that Pasifika group,” McKellar said.

“It’s great. Good, experienced players like that, that want to compete at this level, it’s good for the competition, and it’s good for the young players that will be able to bounce ideas around and learn off someone like Christian Lealiifano.”

While he is far closer to the end of his career than the start, sources with knowledge of the Wallabies’ thinking told the Herald Lealiifano could force his way into the national fold, should his form justify a place in front of Quade Cooper, James O’Connor or Noah Lolesio.

“It’s a challenge, there’s no doubt. The reality is over the next few days, I will start to send some information through to the players, around what we do, so they have some call sheets and lineout system that they can have a look at and have a read over before they come together,” McKellar said.

“The reality is, they’re going to have to work hard in the background to get themselves up to speed. Senior players and myself and the coaches, we have to work hard to ensure detail is locked away quickly as possible.

“Because the last thing you want to do as a footballer is be running around thinking about calls and systems and this sort of thing. You want a really clear headspace and clarity around what your role is.

“Then, you can go out and execute it. Those three guys, you play to their strengths. They bring genuine physicality, and they have a nasty edge to how they play. You don’t want to water that down by having them overthink what’s involved in the detail.”