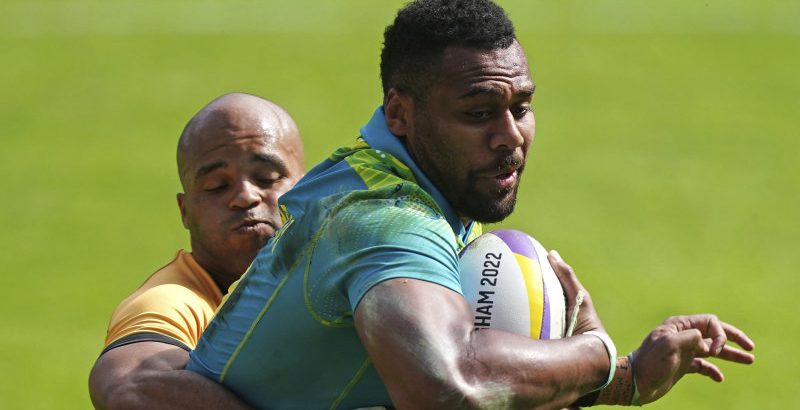 The Wallabies will be without powerful centre Samu Kerevi for the rest of the year because of a serious knee injury he suffered at the Commonwealth Games.

Kerevi injured his right knee while playing for the Australian sevens team in Birmingham, during a pool round clash against Kenya. 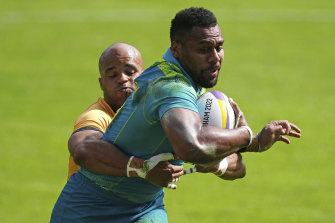 Samu Kerevi has been ruled out for the season.Credit:PA

It was initially downplayed by the sevens team but scans revealed what is believed to be an ACL injury. He will not be available for the Wallabies’ Rugby Championship campaign or the spring tour.

The Wallabies confirmed the news in a social media post.

It is the second consecutive year Kerevi has picked up an injury after being called up from his Japanese club Suntory for Australian duty. He also injured his ankle in 2021, which ruled him out for three games and led to his withdrawal from the spring tour.

Kerevi was among the three Giteau Law picks for the Test series against England in July but, as he did at the 2021 Tokyo Olympics, the big centre asked to play for the sevens team at the Commonwealth Games. 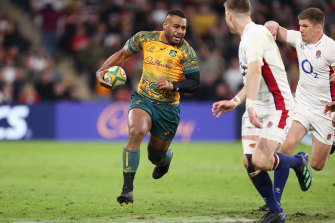 Samu Kerevi playing against England in the July series.Credit:Getty

Kerevi suffered the latest injury in seemingly innocuous circumstances. He carried the ball against Kenya and broke a tackle, but left the field soon after. Australia won 7-5 and later finished fourth after a semi-final defeat to South Africa.

Kerevi was optimistic about the injury soon after, telling reporters: “I’m always confident but I’ll get a doc on it and see. It was just a big bang but then once it settled down it was fine.”

He had been due to miss both the Wallabies’ Tests against Argentina but rejoin the team to meet South Africa and New Zealand.

Kerevi’s loss is a major blow for the Wallabies, who have reliable centres in Hunter Paisami, Lalakai Foketi and Irae Simone in the squad, but none have the same X-factor as Kerevi.

The injury will add strain to the Wallabies’ relations with Suntory, given last year’s injury and the fact the 29-year-old could be out for a large period of the Top League season.

Kerevi remains a big part of coach Dave Rennie’s plans for the World Cup but will go into the tournament with a much-reduced tally of preparatory games.

The Wallabies loaded up their spring tour with games to bed down combinations and game style, given they will play only a handful of Rugby Championship Tests in the lead up to the 2023 Rugby World Cup.