Jed Holloway may have been extremely critical of the Waratahs earlier this year but when Michael Hooper approached him about a potential return, he was all in.

But that didn’t mean he would be welcomed back to Daceyville with open arms. 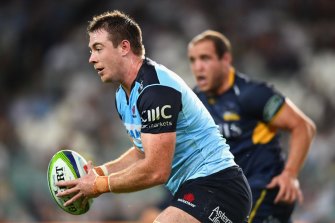 Jed Holloway is back in sky blue.Credit:Cameron Spencer

After all, Holloway did criticise the culture former coach Rob Penney built in February.

“The thing that I saw, and I found hard to get around is, I saw how it all worked and the culture in 2014 and the way it moved away from that culture,” Holloway said at the time.

Those comments didn’t deter Hooper from trying to lure Holloway home, but the Waratahs wanted to give new coach Darren Coleman the final call.

Holloway played under Coleman in the NRC for the NSW Country Eagles, and that link proved the key to earning another chance in Sydney.

“Coming in and seeing what he’s doing here, it’s something that I haven’t – in terms of building a connection and culture – I haven’t seen since Cheik, when he first came in,” Holloway said after all five Australian Super Rugby sides revealed their squads on Monday. “That’s why I believe in this group. You will start to see combinations and things will start happening very quickly.

“He’s really pushing that culture and making sure guys get to know each other and make us play for one another.”

Holloway was on the fringe of Wallabies selection during Cheika’s time as coach, but never managed to transfer squad selection into a Test cap.

The 29-year-old, who will play lock under Coleman, took full responsibility for failing to transfer potential into success at the highest level.

After a year at Toyota Verblitz playing alongside Hooper, former All Blacks captain Kieran Read and Springboks star Willie le Roux, Holloway now believes he has the tools to handle pressure – both internal and external.

“I think in Sydney, for me, I felt the pressure, in Sydney and at the Waratahs. There was expectation after my [breakout] 2016 year, and I kind of felt that anticipation a little bit,” Holloway said.

“Going away, learning the culture and learning from guys with huge amounts of experience, I learnt to enjoy the game again and really appreciate what it is, appreciate my teammates and appreciate the fact that it is my job, but I play because I grew up loving it. I really found that again.

“I think for me, I just needed that time away to really light that fire again and re-motivate myself and work out what was true to me, what I wanted and how I wanted to be seen as a rugby player and as a person.”

A more mature, more experienced Holloway wants to bring success back to the Waratahs.

But he also has one eye on that elusive Wallabies cap.

“Of course, I hope I can play well enough to be there,” he said. “I have huge belief in my ability and know that if I’m playing well enough, that I can be in that system.

“There are a lot of steps I need to take in terms of doing that. Staying consistent, showing up here and the rest will hopefully look after itself.”