Fourteen-man Ireland sealed their place in the World Cup quarter finals with a seven-try victory over Samoa here in Fukuoka, but Bundee Aki’s red card will be a worry for Joe Schmidt.

Ireland found themselves down to 14 men after 29 minutes when Aki caught Samoa out-half Ulupano Seuteni with a high tackle.

World Rugby have clamped down on those high shots in a big way over the past 12 months and Aki was duly given his marching orders. 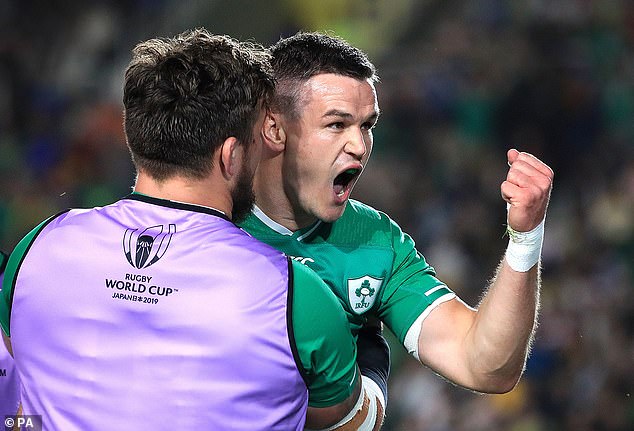 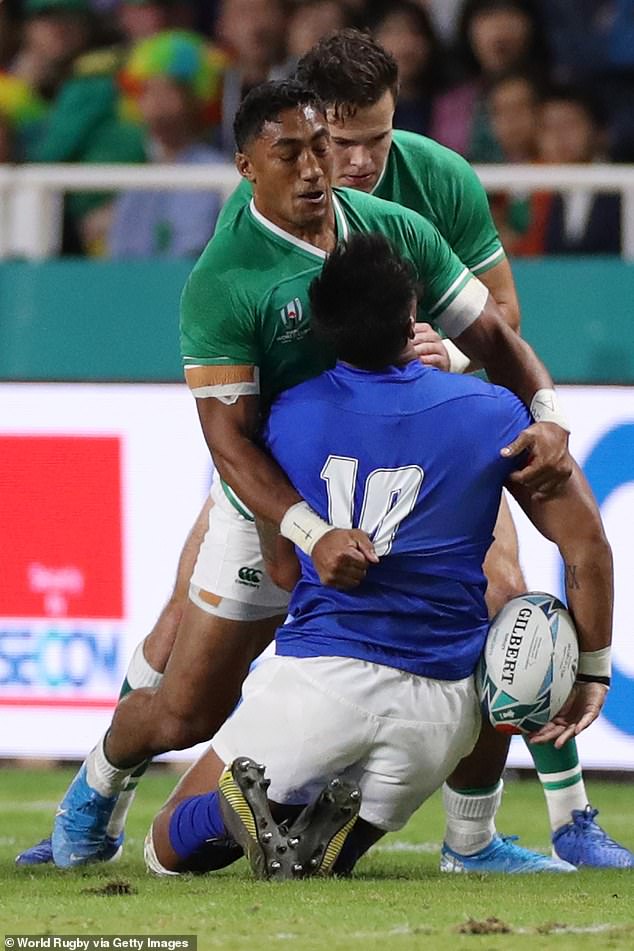 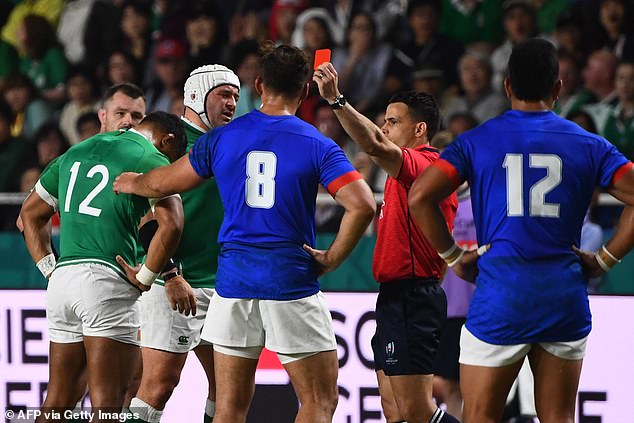 The Connacht centre will be cited and faces a ban, which may bring an end to his involvement in Japan. Aki’s red card aside, Ireland got their World Cup back on track with a dominant display.

Regardless of what happens with the Scotland and Japan clash in Yokohama, Schmidt’s men have made it through to the knockout stages.

Sexton once again proved the catalyst for an Irish victory with the Leinster No10 bagging a brace in a superb first-half display.

There were big performances from the likes of Tadhg Furlong, James Ryan and CJ Stander in a supreme effort from the pack.

This was a free hit for Samoa. The Pacific Islanders are heading home on Monday and this was the last chance for Steve Jackson’s crew to leave an impressoin on this tournament.

Their inspirational captain Jack Lam – who turned down several offers from French clubs so he could lead his country here in Japan – summed up their mood on the eve of this clash. ‘For us as players, we want to leave with a bit of pride in the jersey,’ said the former Bristol flanker. 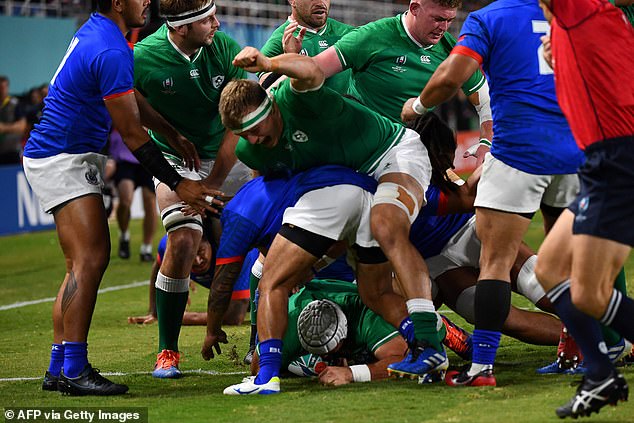 It’s been a difficult week. We’ve had Typhoon Hagibis, an earthquake off the coast of Chiba, match cancellations, threats of legal action from the irate Scottish camp and issues with the officiating.

Schmidt and the Ireland management were not best pleased with the playing surface here at the Fukuoka Hakanatomori Stadium.

The turf, which had to be relaid less than two weeks ago after cutting up badly during France’s clash with the US Eagles, looked in an awful state. It is certainly not a Test match-standard surface. 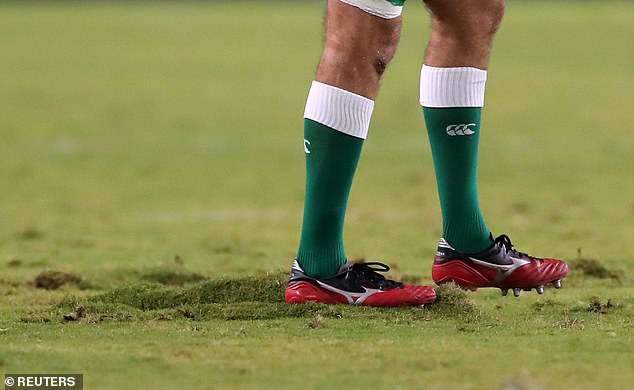 But World Cups are all about adapting and that’s exactly what Ireland needed to do here. Schmidt’s men needed a bonus-point win to ensure their safe passage into the quarter finals, regardless of what happens with Japan and Scotland on Sunday.

Accordingly, Ireland’s head coach named a fully-loaded line-up with only Rob Kearney and Peter O’Mahony missing. All the frontliners, including Johnny Sexton and Robbie Henshaw, were back to this one.

Ireland stated their intentions with Sexton kicking for touch after the Samoans had strayed offside with an attacking lineout secured deep in enemy territory.

This stadium has a Thomond Park-esque feel and the opening try was very much a Munster special. Iain Henderson rose high to claim Rory Best’s lineout throw and the Irish pack drove their captain over the line. 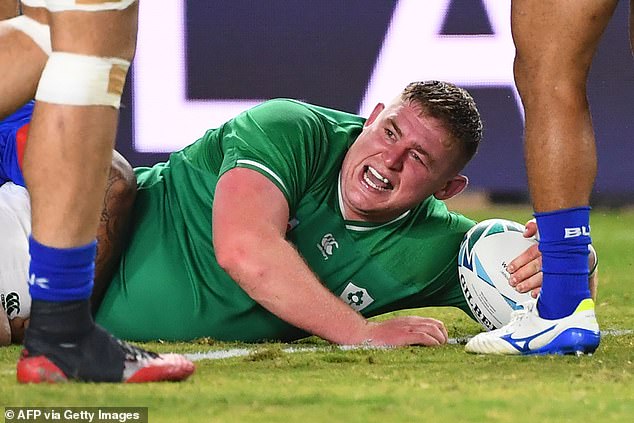 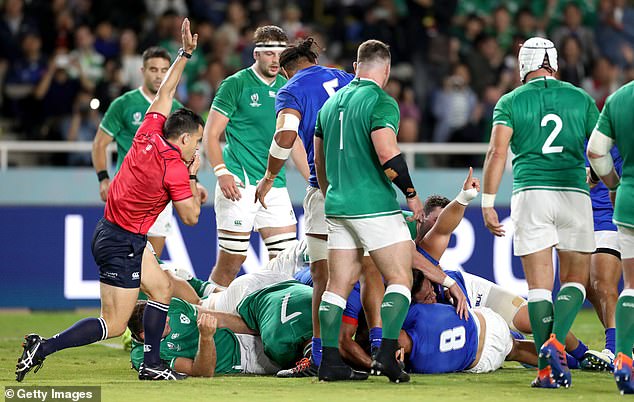 Sexton’s touchline conversion make it 7-0 and Ireland were up and running. There was further trouble for Samoa when their hooker Seilala Lam was sin binned for a high hit on Jacob Stockdale.

Samoa have felt hard done by at this World Cup with two of the their players – Rey Lee-Lo and Motu Matu’u – copping bans for high tackles earlier in the pool stages.

But they could not argue with Lam’s punishment. There was then the worrying sight of Conor Murray getting attention from the medics before CJ Stander was emptied in twin tackle by TJ Ioane and Chris Vui. 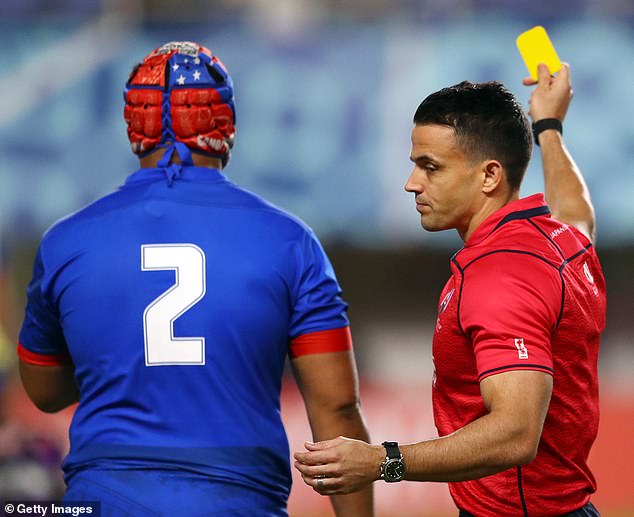 No mater, Ireland would make their numerical advantage pay almost immediately as Furlong rampaged his way through four would-be Samoan tacklers to score. It was the rampaging Furlong of old.

Sexton’s conversion nudged Ireland out to 14-0. It was all Ireland early doors, dominating possession and territory.

If the first tries of the night were scored via blunt-force trauma then the next was all about the silkiness of Ireland’s outside backs as Jordan Larmour – making his second start in Japan at full-back – scythed past Jack Lam before offloading to the supporting Sexton for the third try of the night.

He then converted his own try for good measure. Three visits to the Samoan 22, three tries. It was clinical and ruthless from Ireland. 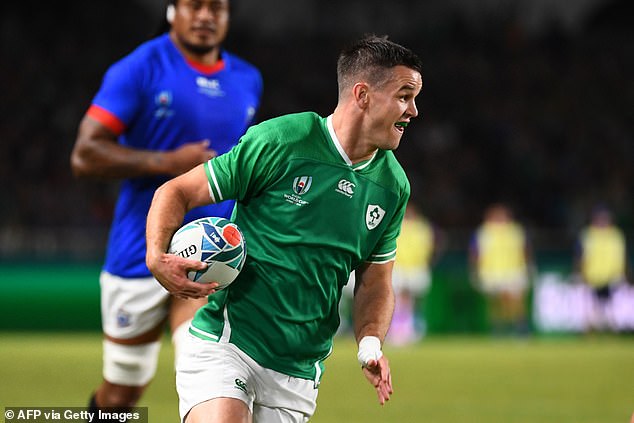 Henry Taufu hooked the conversion but Samoa had made a statement. There were big hits flying in all over the place and Aki would put himself in hot water with refere Nic Berry when he caught Seuteni with a high shot.

World Rugby’s letter of the law is clear on such tackles and the Connacht centre was sent off. A huge moment. It meant Ireland would need to play the best part of a 50 minutes with only 14 men.

Aki became the first Ireland player to be sent off since CJ Stander was red carded against the Springboks in 2016. Ireland secured a heroic victory in Cape Town that day and they would need to summon up another big performance here in Aki’s absence. 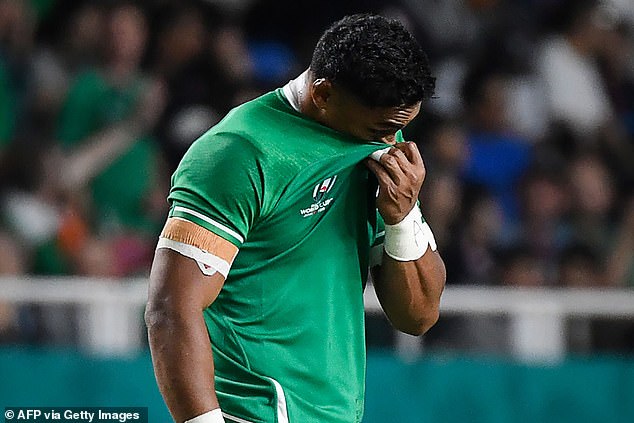 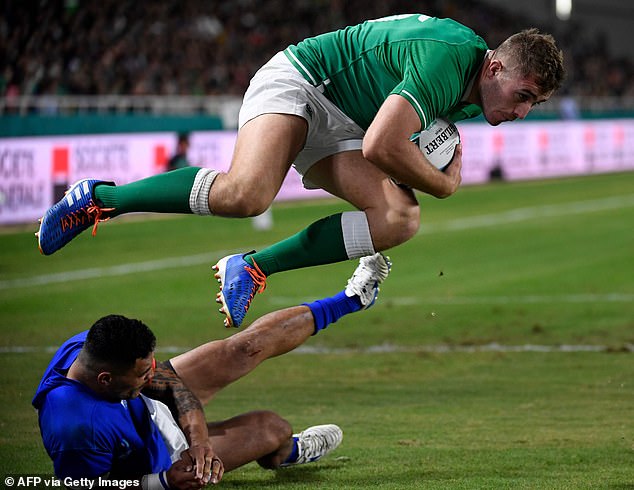 It lead to a reshuffle in the Irish backline with Keith Earls moving of his wing into the midfield as Robbhe Henshaw shifted to inside centre. Ireland were clearly rattled by that red card with the likes of Murray and Earls making uncharacteristic errors. Leave it to Sexton to steady the ship, however.

The veteran out-half dummying and driving his way over the line to secure the precious bonus point try just before the half-time gong.

With a 26-5 lead in the bag, Ireland had one foot in the quarter finals. It was just a case of battening down the hatches and emerging injury-free after the break. Down a player, Ireland kept it simple as they sent their forwards trucking it up around the fringe of the turf. Furlong was denied a second try when he was held up inches for the line.

He was called ashore by Schmidt soon after. A huge shift from the Ireland tighthead. Larmour would not be denied, however. The Leinster starlet racing into the corner thanks to a sublime skip pass from Murray. 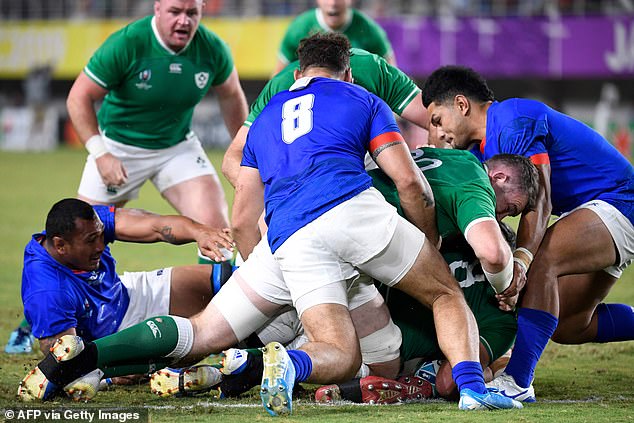 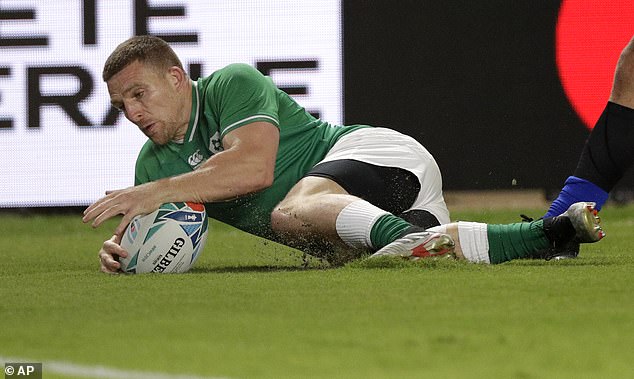 Job done. Time to start thinking about that quarter final. Samoa would lose Ioane to the sin bin to add insult to injury. Stander would then barge his way over for Ireland’s sixth try of the night after 65 minutes as the green machine continued to dole out the punishment.

It was turning into a rout now as as Carbery’s deft chip sat up for the onrushing Conway – on for Henshaw – who won the race to the bouncing ball.

Despite their numerical inferiority, Ireland had the half century in their sights. They failed to break the 50 mark, but Ireland won’t be overly fussed. They are back on track.