The last time Josh Strauss faced Leone Nakarawa was a day that the Scotland back row would really rather forget.

He picked up a yellow card for an attempted tackle on the Fijian man mountain, ended up on the losing side, and had such a stinker of a game that he’s never pulled on the dark blue jersey since.

How ironic that the pair could square up again at Murrayfield this Saturday if Strauss makes his first international appearance in 17 months. 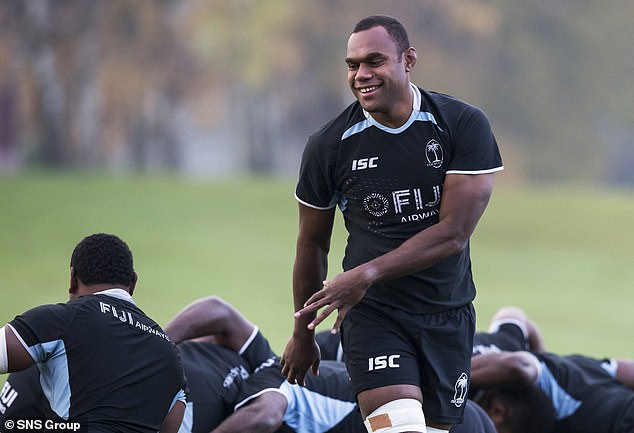 No one knows better than the Sale Sharks star that Nakarawa – who gave him such a torrid time in that 27-22 defeat in Suva – is the player Gregor Townsend’s side have to stop if they are to have any chance of beating the South Sea Islanders this weekend.

Tackling the 6ft 7in, 19st 6lbs colossus early and effectively before he builds up a head of steam is a necessity. But Strauss knows from bitter experience that it is easier said than done against his former Glasgow Warriors team-mate.

‘I had tried to absolutely empty him but, because he’s so heavy, he almost broke my shoulder,’ he said. ‘I couldn’t wrap my arms around him because he’s so big and I got done for a no-arms tackle. 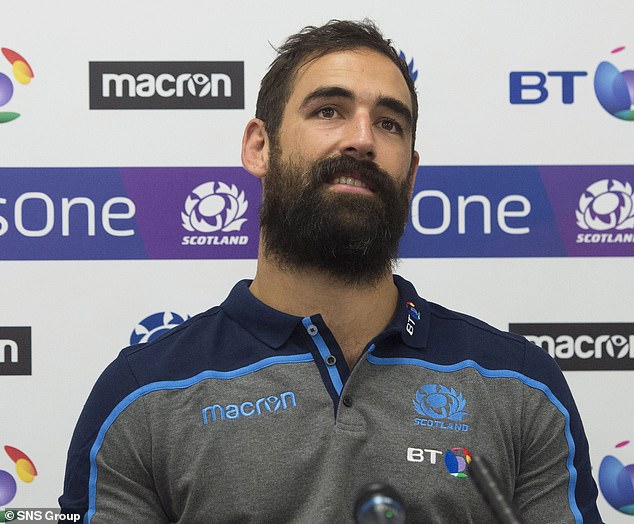 ‘Naks is the only guy I know in world rugby who can stand upright with his arm in the air, get hit by three people, and not really move.

‘I’m itching to have a crack at international level against him – and them – again this weekend.

‘If I’m involved that would be great. I really want to put one over them at Murrayfield and get a really convincing win.’ When Fiji beat Scotland in the summer of 2017, it was Nakarawa who ran the show. He dominated the line-out, brushed off tacklers like Strauss (below) and Jonny Gray with ease, and set up a try after a blistering run which saw him momentarily carry the ball in one hand.

If anything, his performances have been even better since then for Fiji and Racing 92, the team he helped reach the European Champions Cup final earlier this year.

‘He’s probably one of the best that I’ve played with or against,’ said South African-born Strauss.

‘He’s just class. He’s a great guy to have around any club or organisation. He’s always happy, works really hard, is never grumpy about anything. That just makes him even more special.

‘What a difference he can make to a team when he’s on song. He stands up, sucks in three defenders and still gets the ball away. Very few people, physically, are that blessed.

‘I’ve had quite a long career and worked with quite a few Polynesians but he’s got a different mindset.

‘He listens, he writes things down, he studies up on what we are doing. When he does something bad he goes off and does his extras.

‘He is the kind of guy who just buys into everything. He’ll say: “I’m there, I’m going to work hard, I’m going to be the best.” That’s what sets him apart.’ For all his admiration for Nakarawa, Strauss is acutely aware that the Fijians are definitely not a one-man team, and have a wealth of talent in their ranks. 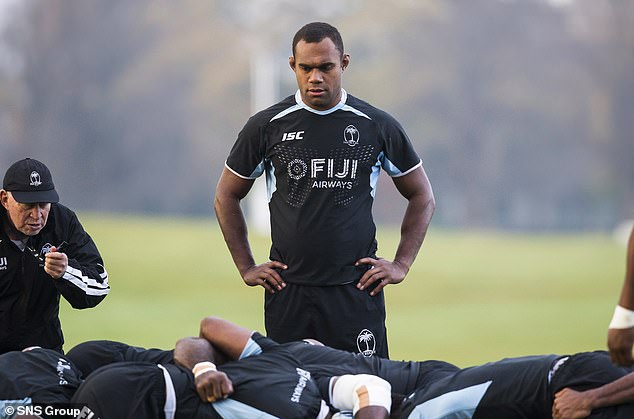 In days gone by, the moniker ‘flying Fijians’ neatly summed up their up-tempo style of attacking play.

But now they are much more pragmatic in their approach and far more physical than they used to be.

Glasgow Warriors back Niko Matawalu, a diminutive 5ft 9ins, but packed full of talent, can’t even get into a Fijian squad dominated by bigger players such as Nakarawa and Edinburgh back row Bill Mata.

‘In the last game we played against them in Suva, the rain came down in the morning, and all of sudden you saw a different Fiji team that played a very structured, physical game, straight up the middle,’ said 32-year-old Strauss.

‘We maybe weren’t as ready for that side of their game, but it’s now something we have seen once and we have to be ready for it.

‘I certainly think the scary thing about Fiji is how big they are, and how they can also play a flair-based game.

‘In the English Premiership, whenever you play against a team with a Fijian they are invariably the top player to look out for and target.

‘It’s a bit worrying when you’re playing against 15 of them put together, like we are on Saturday.

‘The special thing about playing Fiji is the fact that they have so much flair and talent and natural physical ability throughout.

‘In some teams, you get guys who are very hard workers but maybe not the biggest people, whereas Fijians have a lot of flair and power about them, so it’s a different game.

‘It’s something that you’re maybe not that used to when you play northern hemisphere teams, but you have to prepare for that when you’re up against players like Nakarawa and Mata.’