‘That’s what my ancestors used back in the day,’ chuckles Joe Cokanasiga, pointing out the hardwood club primed over his right shoulder in a photograph with the Queen. ‘Warriors!’

Bare chested, face covered in war paint and wearing a Fijian straw dress… it is not the traditional image associated with an England rugby player.

Her Majesty, wearing a bright fuchsia and black jacket, unsurprisingly looks rather nervous. 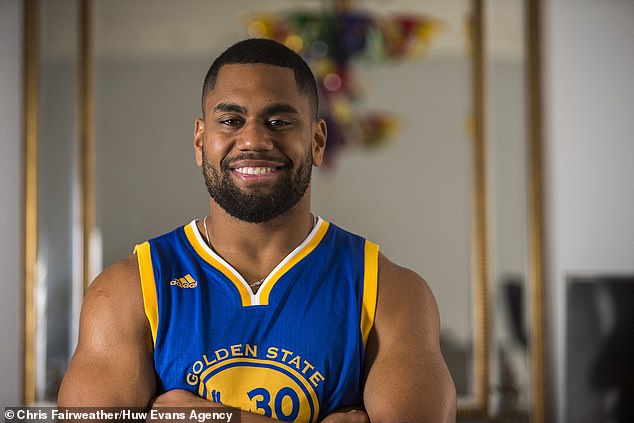 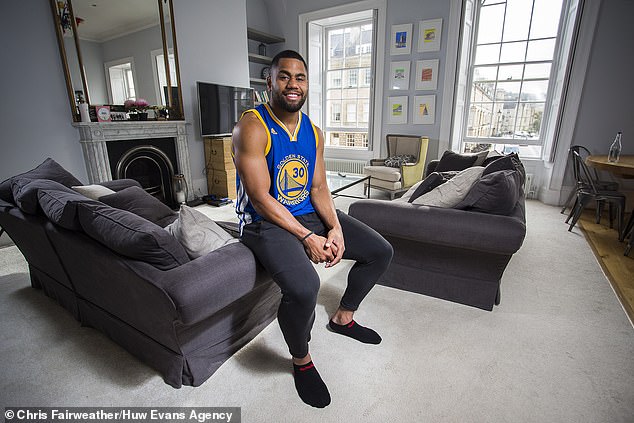 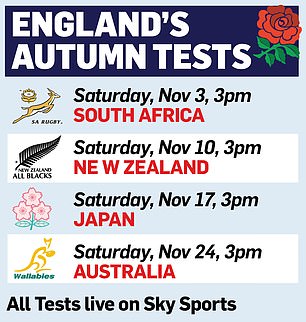 ‘My job was to stand there and look fierce when the Queen arrived,’ explains Cokanasiga in his softly-spoken tone, which belies his hulking 6ft 3ins and 116kg frame.

‘All I remember is standing barefoot on the freezing cold pavement. I was just thinking, ‘I think I’m going to faint!’

It was not the only time Cokanasiga has stood on ceremony in the name of his birth country.

‘Remember the Fijians dancing around Twickenham before England played Fiji in the World Cup in 2015?’ he asks. ‘I was one of those guys, too!’ 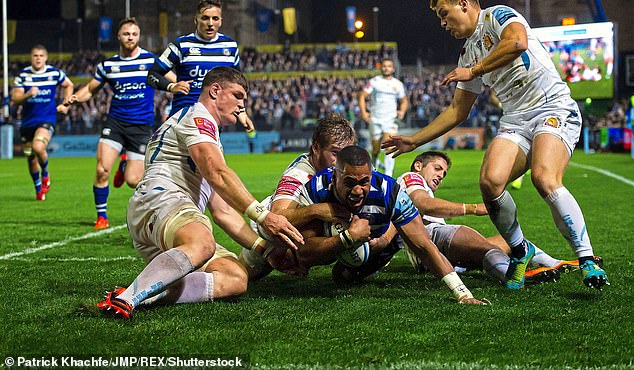 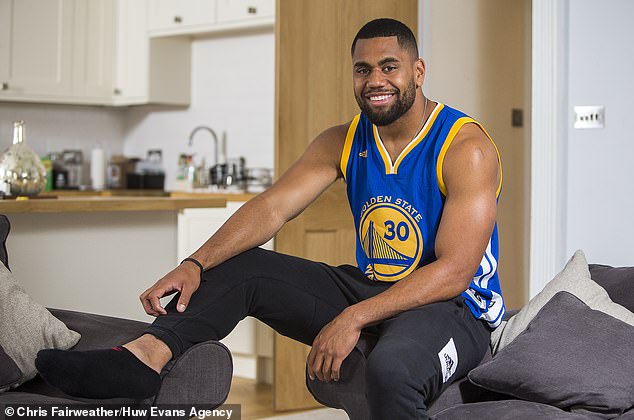 ‘Fiji’s engrained in me, even though I only lived there for three years,’ explains Cokanasiga

How times have changed.

Ratu Josateki Tuivanuavou Waqanivalu Cokanasiga – which translates to ‘Chief Joe, King of the new place, the warship with spears of the sun’ – is no longer the warm-up act. The 20-year-old winger recently broke Bath’s speed-testing records, clocking 10 metres per second over 50m, and now he has been called up for England’s autumn series. Eddie Jones prefers to call him ‘Big Joe’.

WHAT’S IN A NAME?

Chief Joe, King of the new place, the warship with spears of the sun

His childhood followed his father’s army career in the Royal Logistic Corps. It took him from Suva, where he was born, to Germany to Brunei. Today, home is in England — Sam Burgess’ old apartment in the centre of Bath, to be precise — and Cokanasiga’s allegiance is to the Red Rose.

‘Fiji’s engrained in me, even though I only lived there for three years,’ he explains. ‘I always got special treatment because my grandad was chief of the village and he never had a son. If I was crying he’d say, ‘Why is my boy crying!’ I was always walking around with mango in my hand! 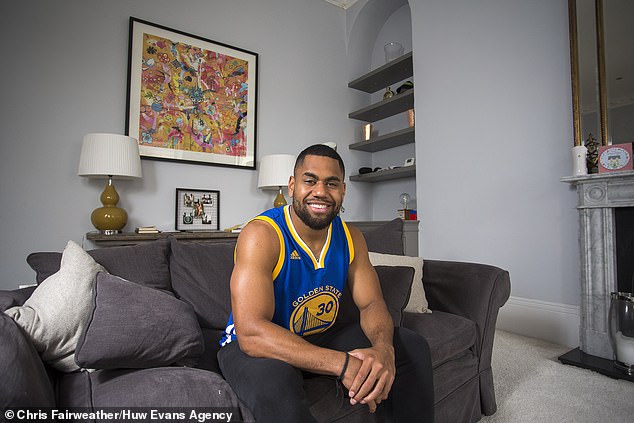 ‘The ‘Ratu’ part of my name is to do with the chief part of my background. Our old surname was ‘Waqanivalu’ which links back to cannibals. Fijians used to be known as cannibals… so watch out!’

You have been warned. Cokanasiga is the latest dazzling winger to emerge from the Fiji-gened production line. As a young child, he used to get out of Sunday church service to play touch rugby. As a teenager, he started playing in the centres for the army and he found his idols close to home.

‘I started playing for dad’s army team when I was 14,’ he explains. ‘He played 12 and I played 13. He’d make all the line breaks and I’d be there to finish it off and score. If I got hit hard, dad would be like ‘I’ll get him back’ and smash him! He runs everything straight. He can goosestep for a big guy. There’s a video of him doing a dummy, goose, then smashing some bloke.

‘The way I try to play is the way my dad used to play. Nowadays I watch Fijian wingers because that’s the way I want to play. Joe Rokocoko and Semesa Rokoduguni. Guys who can do something out of nothing to change a game. Risky offloads, making an impact with the flashy stuff.’ 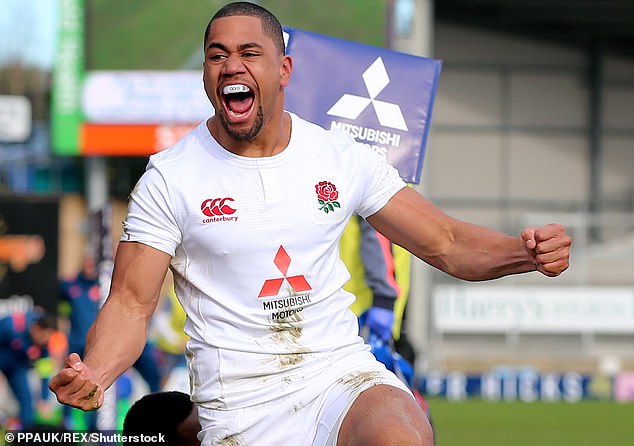 Cokanasiga’s moments of magic have already made him a fans’ favourite in Bath. He signed from London Irish during the summer and has settled in quickly.

His mantelpiece is decked with photographs of Fijian relatives and a small pile of paperwork. ‘I still get mail with Sam Burgess’ name on it,’ he laughs. ‘Bills and stuff!’

There is the token PlayStation and a small collection of books. One of them is entitled ‘Changing your mindset to fulfil your potential’.

Nick Kennedy, the former director of rugby at London Irish, introduced Cokanasiga to sports psychology and now he writes notes on his wrist before every game. 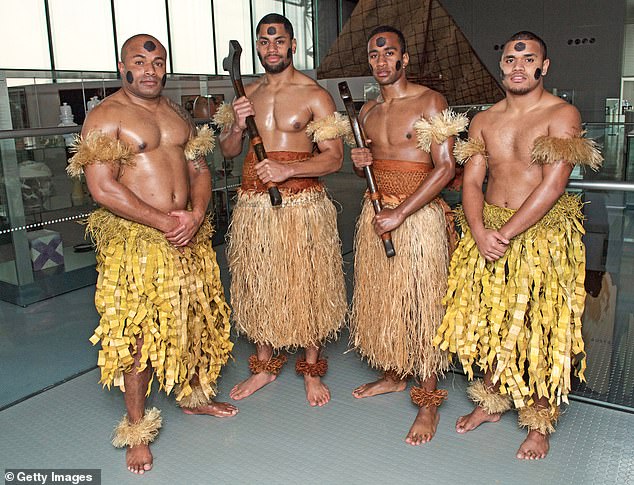 ‘I write “family, work rate and the boss”,’ he explains, wearing a Golden State Warriors NBA jersey. ‘It’s about going out there and bossing the game. LeBron is the boss. He dominates and can win you a game. I like the way Kevin Durrant plays, too: aggressive, dominant.

‘We’ve got an American football at Farleigh House. I watch Jarvis Landry and Odel Beckham Junior. Landry has this quote — ‘Go ahead and bless them’ — which I keep in my head. Bless the crowd with your skills and talent.’

Next month, Cokanasiga hopes to bless Twickenham with his talent. ‘I’ll always have that Fijian connection but my goal has been to play for England,’ he says. ‘If I didn’t back myself, I wouldn’t be here.’

After all, he does have the royal seal of approval.