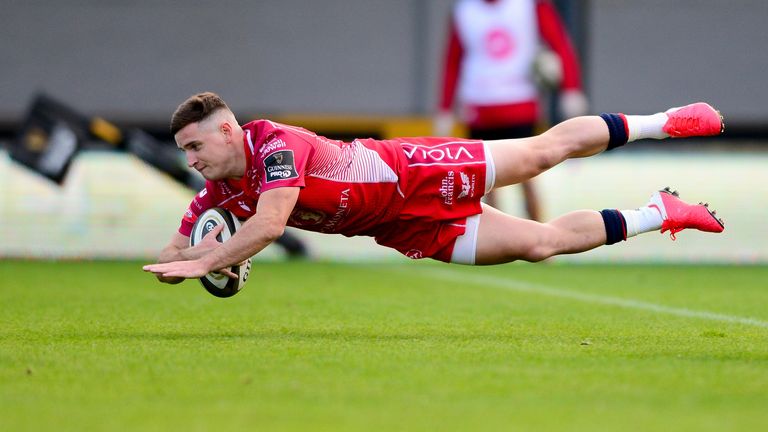 The Scarlets moved into second place in the Guinness PRO14 after a rousing second-half performance saw them overwhelm the Dragons 41-20 at Rodney Parade.

Prop Samson Lee, wings Steff Evans and Johnny McNicholl, flanker James Davies and replacements Tom Rogers and Dane Blacker all crossed the line in an impressive display by the visitors, while Dan Jones booted four conversions and a penalty.

Wing Jared Rosser, flanker Taine Basham and centre Adam Warren grabbed the Dragons’ tries, with fly-half Sam Davies kicking a penalty and conversion, but they came up short after a promising start.

An entertaining opening half saw the lead change hands three times and the Scarlets seemed ready to pull away before the home team fought back to within a few points.

Davies put the Dragons ahead with a penalty after 13 minutes but a frantic eight-minute spell saw the scores change from 3-0 to a 14-10 lead for the visitors.

The Scarlets, with Wales hooker Ken Owens playing his 250th match to become only the second player to reach that milestone for the West Wales team in the regional era, had chances to score and put Jake Ball through only for play to be called back by referee Craig Evans. However, a big attacking line-out and drive from the visitors left Lee with space to go over from a couple of metres for a converted try.

The Dragons hit back when pressure inside the 22 saw the ball pushed left and brought a two-on-one, with Basham setting up Rosser for a simple touchdown that Davies converted.

Yet the Scarlets struck again as a big drive in the home 22 allowed lively scrum-half Kieran Hardy the chance to slip the ball to Davies, who shipped it to Evans for the touchdown.

And with Jones adding the extras and Davies being driven over by his pack for a third Scarlets try, it was going well for the visitors.

However, in the last seconds of the half, Basham had the ball in a driving maul to go over as the Dragons closed the gap to 19-15.

After home number eight Harrison Keddie had been sin-binned for a ruck offence, Sione Kalamafoni thought he had scored for the Scarlets when diving over a pile of bodies to touch down only for the TMO to rule it out.