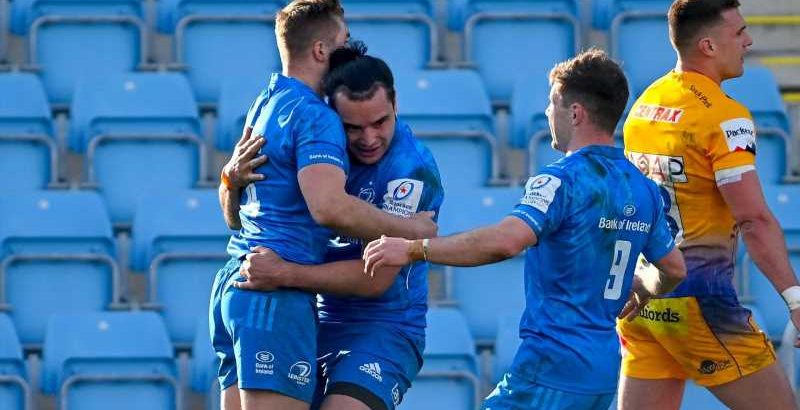 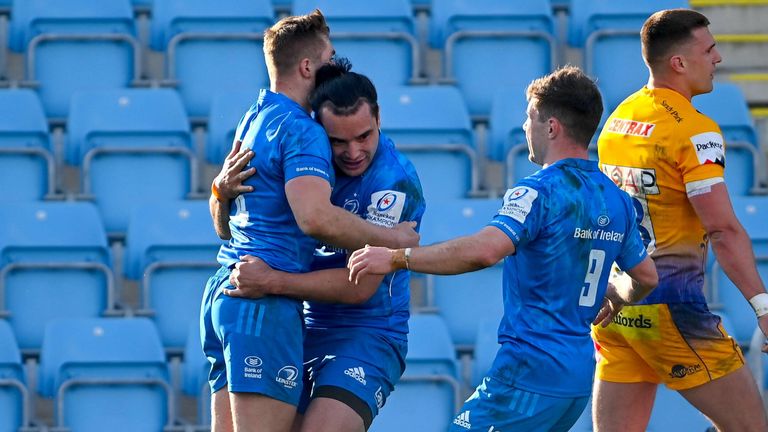 Leinster recovered from 14-0 behind to secure a superb 34-22 victory at the home of defending European champions Exeter on Saturday, coming out on top in a fantastic European Cup quarter-final.

For Exeter, wing Tom O’Flaherty gave them the perfect start with two tries inside 10 minutes, while Dave Ewers added another and Joe Simmonds a penalty, but the Chiefs could not execute their characteristic ruthlessness nearly enough on the day.

Leinster now join La Rochelle in the semi-finals of the competition, with the other sides to come from Bordeaux vs Racing 92 and Toulouse vs Clermont on Sunday. The semi-final draw will also take place on Sunday. Leinster made a scrappy start to the contest, with lock Devin Toner caught offside while making a charge-down, and the visitors then free-kicked at the lineout for not leaving a gap.

Exeter would take full advantage, as from the subsequent scrum they scored a superb first-phase try through O’Flaherty with less than three minutes on the clock, as well-executed passes out the back created space to scythe through the Leinster defence. 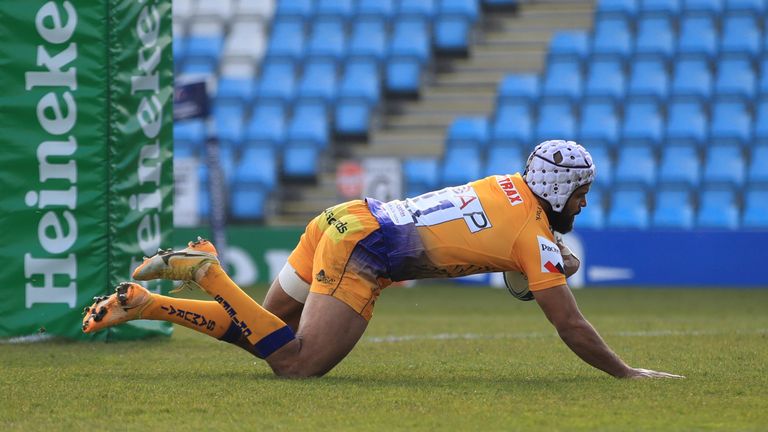 Moments later, Leinster’s defence wilted again as more pressure in and around the visitors’ 22 saw O’Flaherty breach tackles and dive over for his second try.

Once again, skipper Simmonds converted off the tee, handing the Chiefs a 14-0 advantage inside the opening 10 minutes. Leinster responded with their first attack in the 11th minute when wing Lowe exploded down the left and offloaded inside, before scrum-half Luke McGrath picked up and darted for the line. The Chiefs defence just did enough to hold him up and avoid the concession of a try.

From the five-metre attacking scrum, Leinster forced a penalty, before twice tapping and going from five metres out. The second such attack saw Exeter second row Jonny Gray get over the ball to win a priceless turnover on top of his line.

Leinster recovered possession from the Exeter lineout which followed, but the Chiefs defence within their own half was exceptional, forcing Leinster back repeatedly before No 8 Jack Conan threw a pass off the park.

A free kick conceded against the head at the scrum soon saw Leinster back with the ball, however, and this time they would not be denied as Lowe ran in after more positive play down the left – this time full-back Hugo Keenan dancing through and offloading brilliantly. 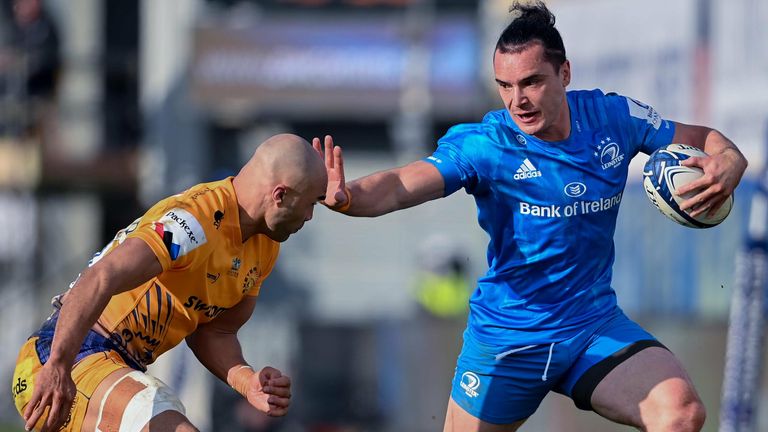 Sexton converted to reduce the deficit to 14-7 on 19 minutes, and Exeter’s next foray into the Leinster 22 following the restart was halted when the Chiefs were penalised for a side-entry at the breakdown.

With both sides playing at ferocious pace when in possession, and the ball-in-play time enormous, the next meaningful chance arrived when Henshaw forced a breakdown penalty, and Byrne – by now having replaced Sexton – kicked to touch within the Chiefs 22.

From that lineout, Larmour raced in for a try in the opposite corner as Leinster sprung wide quickly and Keenan once again provided the assist. Byrne converted magnificently off the touchline, and with half an hour on the clock, the quarter-final was perfectly poised at 14-14.

Another breakdown penalty – this time won by Leinster hooker Ronan Kelleher – then presented Byrne the chance to edge the visitors in front off the tee from distance. The replacement took the chance with aplomb, striking low and true through the uprights, and from 14-0 behind, Leinster were 17-14 ahead.

With the breakdown turning more and more into an unpredictable lottery, Leinster were adapting far better to referee Mathieu Raynal, and into the final minutes of the half Exeter’s Jonny Hill was very fortunate to avoid a card when he hit Byrne high in the tackle.

To much surprise, Raynal adjudicated the hit illegal but not worthy even of a yellow in a review with TMO Philippe Bonhoure. Byrne did convert the consequent penalty off the tee, however, to leave a half-time score of 20-14 to Leinster. Into the second period, Exeter made a strong start as O’Flaherty again skipped through, and when Leinster’s Rhys Ruddock cynically slowed the ball down a penalty followed.

No yellow card was forthcoming, while the Chiefs turned down the very kickable points for a kick to the corner. It was to prove the right call as the Exeter pack romped over via a rolling maul, with Ewers touching down.

Simmonds missed the difficult conversion, leaving Leinster in front by a single point, but the Chiefs soon regained the lead via a penalty. O’Flaherty – having the game of his career – again proved the genesis of the attack, rounding and sprinting clear of the Leinster line.

In their first attack of the half, Leinster earned points though as Ewers and Exeter coughed up a cheap penalty for playing a man off the ball, and Byrne made no mistake to leave the score 23-22 to the visitors. 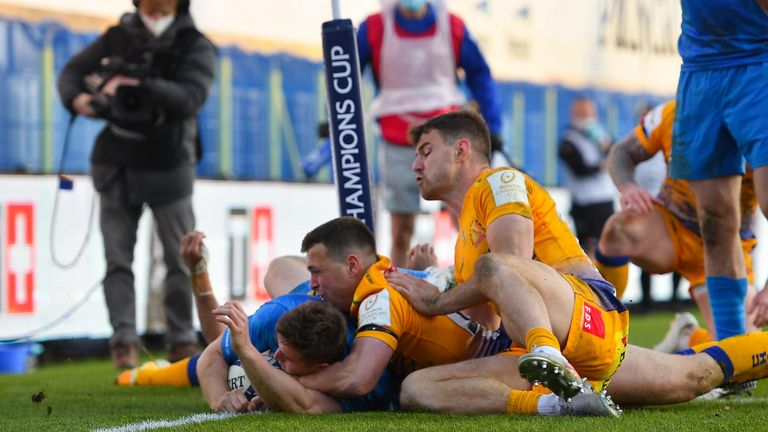 And with 57 minutes on the clock, Leinster got the crucial next score as Larmour finished brilliantly for his second try in the corner, after Ryan Baird had stolen a Chiefs lineout near the home side’s own line.

Byrne missed the conversion to leave Exeter within six points, but with 15 minutes left on the clock Exeter replacement Jannes Kirsten caught Byrne high, allowing the visitors to move out to a nine-point advantage.

Into the final 10 minutes, with Exeter camped on the Leinster line, an accidental offside saw the ball turned over and with it, all chances of Exeter’s progression went too.