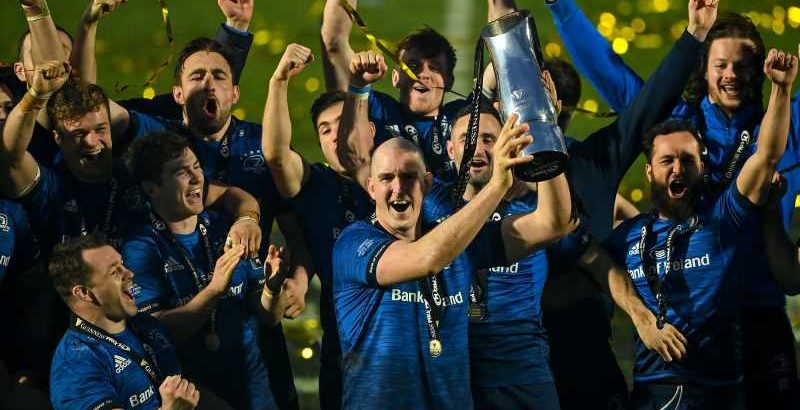 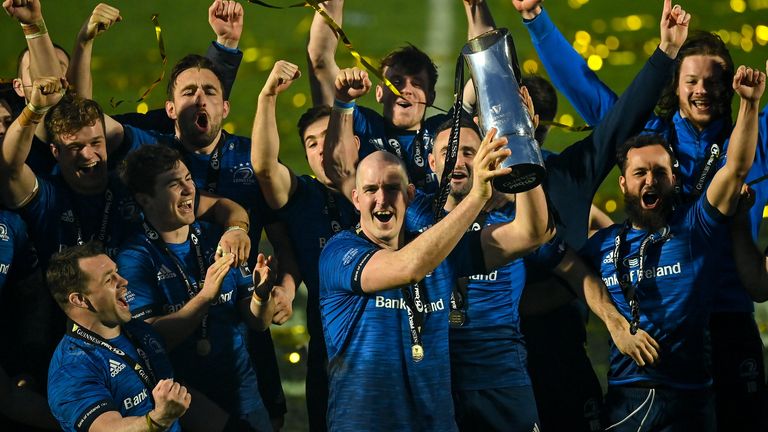 Leinster claimed a record fourth PRO14 title in a row on Saturday after a 16-6 victory over Munster – whose 10-year trophy drought continued at an overcast RDS.

In a tight and intensely physical contest, Leinster No 8 Jack Conan got the only try of the final as Munster’s second-half mistakes left them precious little territory and possession.

Ross Byrne and Joey Carbery traded two penalties each to leave the half-time score 6-6, but the second period saw the defending champions pull away and leave Munster scoreless. 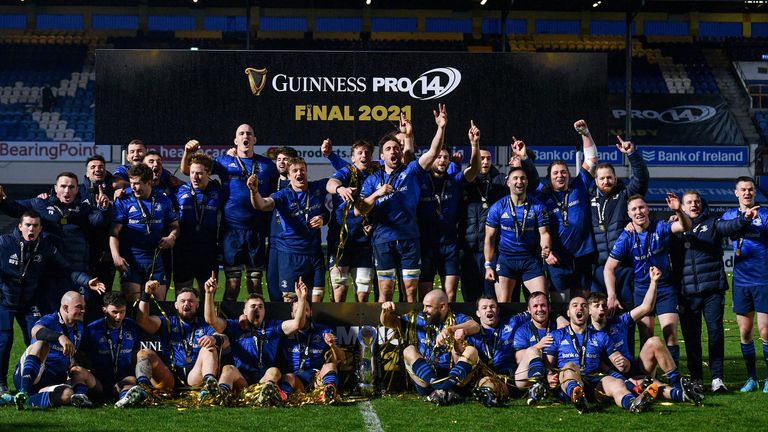 Munster made a poor start to the contest as lock Jean Kleyn spilled Byrne’s kick off, before scrum-half Conor Murray was bundled into touch while attempting to retrieve the situation.

From the consequent lineout, a series of intense Leinster phases was eventually ended when Munster went off feet at a ruck and Byrne could tap over the simple effort from close range off the tee for an early 3-0 lead. 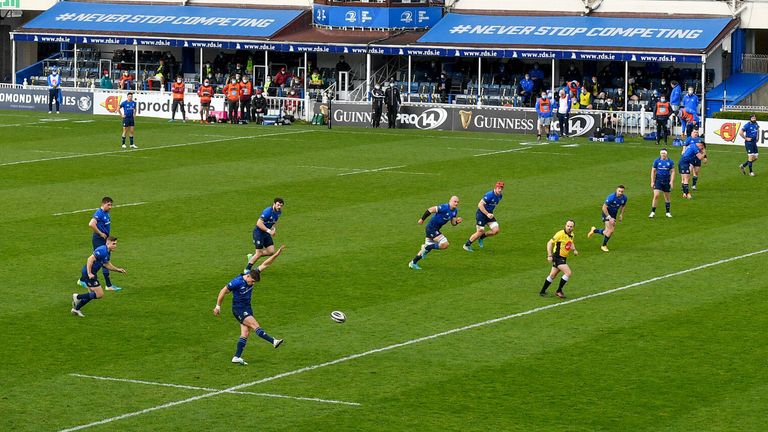 In the next attack, Kleyn appeared to be caught high by Andrew Porter in the tackle, but there was no TMO review and the game resumed with a Leinster scrum after a Munster forward pass.

Another penalty against Munster for John Ryan not rolling away allowed Leinster to kick to the corner, and though Munster defended strongly from the set-piece, hooker Niall Scannell was next to be penalised for going off feet at a breakdown.

This time Leinster chose to point to the sticks, and Byrne duly obliged off the tee for 6-0 after 11 minutes.

Munster responded immediately following the restart as a huge Kleyn tackle on Cian Healy forced Leinster onto the back-foot and flanker Rhys Ruddock to come in at the side. Carbery rewarded such work by dispatching the very kickable effort to reduce the deficit by three. More good defensive work from Kleyn and Munster centre Damian de Allende allowed the visitors to exit their half in the next phase of play, but they couldn’t make anything of the territory when Chris Farrell’s long pass drifted off the park.

An ill-advised quick lineout throw from Mike Haley deep in his own 22 put Munster under all sorts of pressure near the half hour mark, with Leinster’s Scott Fardy denied a try only through outstanding defensive work from CJ Stander to hold the ball up in-goal. Leinster attacked again off the resultant five-metre scrum, but the Munster defence was superb, pushing the Leinster attack back until flanker Josh van der Flier was penalised for obstruction ahead of the ball.

Hugo Keenan would create the next opening with Leinster on top, as he scythed through the Munster line and into the 22, stopped only by a desperate Farrell tackle. Munster wing Keith Earls then came up with an intercept to steal the ball back.

Playing into a stiff breeze, Munster were struggling to get out of their half with kicks as the half drew to a close, and it was only when Stander won a breakdown penalty just within his own half they earned some respite. 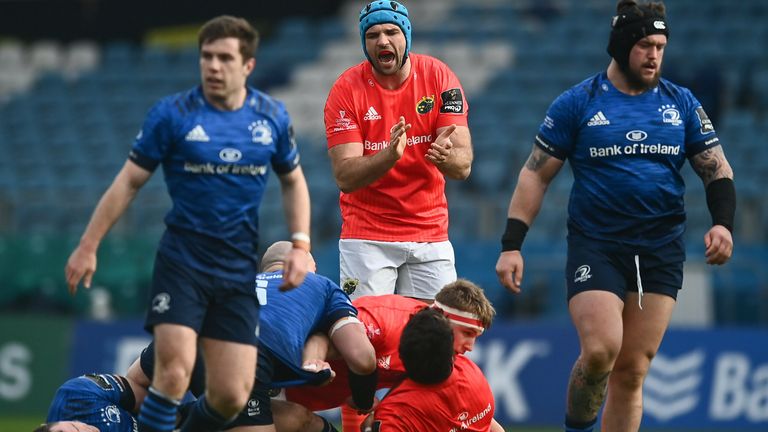 Munster skipper Peter O’Mahony and co surprisingly chose to have a kick at goal from distance, with Murray handed the tee, but his effort dropped just wide.

With two minutes left of the half, Munster were handed another opportunity to level the game with a penalty, but Carbery’s effort from 40 metres or so struck the post and stayed out.

Van Graan’s charges would head into the break level, however, when in the very next piece of play, Murray was caught high and Carbery drove through the uprights for 6-6.

Into the second period, Munster – much like the first half – were slow out of the blocks as a Kleyn knock on in midfield was followed by the concession of a scrum penalty.

Once again, Leinster were held up over the try-line at the first attempt, but Munster’s tireless defence was soon breached as Conan sniped over for the opening try of the final. 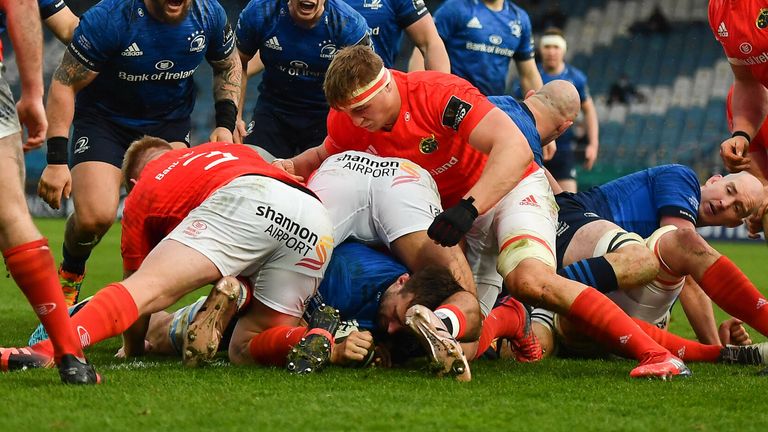 Carbery’s restart drifted dead as Munster backed up mistakes with mistakes, and with it struggled to get into the game.

A scrum penalty against Munster replacement tighthead Stephen Archer followed, handing Byrne and Leinster the chance to stretch their lead out to a commanding 10 points, but the Leinster 10 struck wide.

Leinster’s Ryan Baird ended a Munster attack brilliantly thereafter, stripping Stander of the ball in the 22, and when Munster put together several phases of attack in response, a Kleyn knock on saw them lose all momentum.

A fantastic Luke McGrath tactical kick then preceded a mis-cued Murray box-kick, from which Munster were offside and this time Byrne would make no mistake to put the home side 16-6 ahead with just 11 minutes left.

It was to prove an unassailable lead, with replacement Munster nine Craig Casey tapping and running a late penalty before knocking on to quell any hope of a miraculous late comeback. 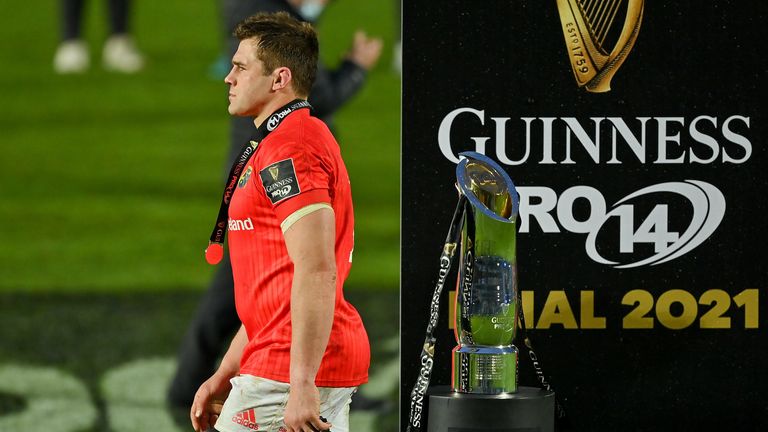