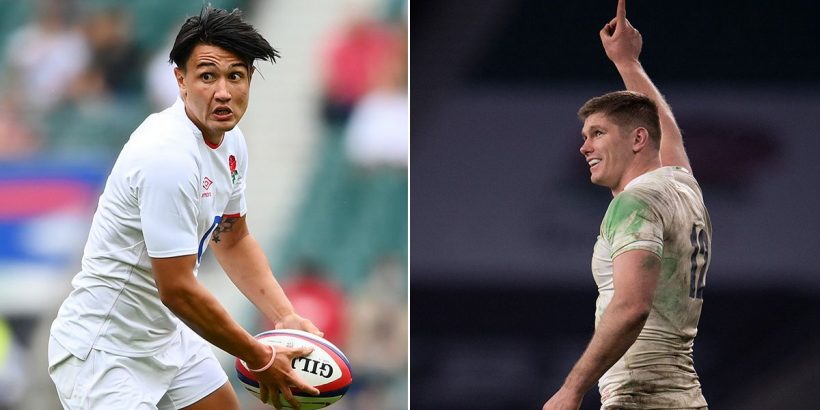 England captain Owen Farrell may find himself in direct competition with breakout star Marcus Smith when it comes to international minutes, but the Saracens talisman is big enough to admit talent when he sees it.

Much of the pre-autumn series speculation surrounding Eddie Jones ' squad has been in relation to whom will start at fly-half, with Smith seemingly in a straight shootout to dislodge Farrell in the No. 10 jersey.

George Ford was one of the most controversial absences from England's November squad despite his stellar form taking Leicester Tigers to the top of the Premiership early on this season.

Retaining Farrell as skipper was perhaps the clearest sign yet that he remains a key part of Jones' plans despite Clive Woodward calling for him to be dropped in order to get the most out of England.

It would be enough to make most players resentful towards someone supposedly gunning for their position, and yet Farrell is full of kind words for the "brilliant" Smith, who is eager to learn from his peers.

"He's obviously a massive talent. We worked together before. He's been to the camp before when he was a bit younger… It was good to get to know him a bit better over the summer," Farrell told reporters on Tuesday.

"He's a brilliant lad. He's a proper student of the game and that sounds cliched, but he wants to get better, understand the game more and loves chatting about rugby. So that made it easy for me.

"He seems confident because he's done the work… When he speaks, he speaks sense and that obviously helps your confidence and helps when it comes to playing in that position. He's obviously doing that really well at the minute… He can unlock a game himself. He's obviously a brilliant balance to have."

Would you start Marcus Smith at fly-half for England ahead of Owen Farrell if only one can play? Let us know in the comments section.

Both players played a part in the British and Irish Lions series in South Africa this past summer, where Smith was called up late as injury cover while Farrell was named in Warren Gatland 's initial touring squad.

It was deserved reward for Smith, 22, who was a driving force behind Harlequins ' dash to the Premiership title last season before storming his way to a first England cap in July.

Farrell—who turned 30 last month—has made a successful return to the first tier of English rugby after a year spent in the Championship, starring in recent dominant wins over Bath (71-17) and Wasps (56-15).

Former Quins full-back Mike Brown also suggested there may not be enough room in England's ranks for both players, warning "alpha male" Farrell could be a part of a new power struggle in England's back line.

The Sarries star settled for a bench role in the first two Lions games against South Africa this summer, but he was then dropped for the third Test in favour of Scotland 's Finn Russell.

And Farrell suggested he'll accept Jones' wishes if the coach were to make plans without him in the side, saying nobody should be considered 'undroppable'.

"I've never thought someone cannot be dropped. You always have to work hard to be in this team and play these games. That's never going to be any different," he continued.

"We're excited about what's coming up. I'm only bothered about working hard for the team and making sure I'm doing my best. Whatever fits best for the group, I'll be happy with."

The Red Rose is due to host Tonga (November 6), Australia (November 13) and reigning world champions South Africa (November 20) at Twickenham, with Jones making a number of unexpected calls in regards to his squad.

A fifth-placed finish at the Six Nations earlier this year appears to have convinced Jones significant changes are needed, notably omitting the likes of Ford, Billy and Mako Vunipola, as well as Ben Earl.

Another of the Saracens crew, hooker Jamie George, was also left out of England's initial squad until an injury to Exeter Chiefs ' Luke Cowan-Dickie resulted in him being recalled.

Farrell may wonder what the immediate future holds in store at the Test level, especially after Smith has hit the ground running in Harlequins' defence of the Premiership title.

That competition has a habit of bringing out the best in certain athletes, however, meaning that for all the talk concerning Smith's evolution, this may yet be Farrell's opportunity to reach new heights in England white.