Melbourne Rebels aim to spring some surprises on the Highlanders in their home-opener at AAMI Park on Friday night.

The Rebels know they have improved since last season and they have brought back injured Wallabies stars Adam Coleman and Reece Hodge who were named on the bench while Dunedin based side have rested All-Blacks star Ben Smith and No.8 Luke Whitelock. 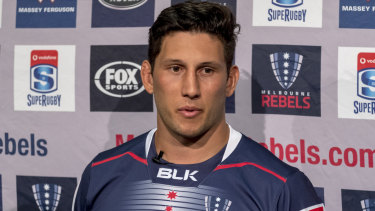 Rebels skipper Adam Coleman has been named on the bench for Friday night’s match against the Highlanders.Credit:AAP

But Rebels coach Dave Wessels has urged his side to back their abilities and their game plan in the face of the New Zealand side's strong defence and bruising play.

The Rebels won their opening round game over the ACT Brumbies then had a round two bye so have been training for two weeks.

"This game more than any other you really need to back your own principles as you don't know what they are going to throw at you," Wessels said on Wednesday.

"If you understand your principles then you can cope with whatever comes. We have also worked hard at growing our own game and we've got to do some things they don't expect of us."

The Rebels offered a few surprises in attack in their win over the Brumbies as centre Billy Meakes made an unexpected but successful kick out to unmarked winger Jack Maddocks for his second try while hooker Anaru Rangi scored a rare try with a diagonal run close to the try line.

"I'll be delighted if Anaru gets a try again this week," Wessels said with a laugh.

"He is one of those guys who just epitomises what we are trying to do.

"He's genuinely tough. To run into a defensive wall at 100 miles per hour with no regard for yourself takes a special type of person."

Coleman and Hodge come onto the bench while emerging back Semisi Tupou was originally on the bench but suffered a concussion at training on Tuesday, he has recovered well but couldn't be cleared in time to play.

When asked about reports Super Rugby clubs were furious several Wallabies players were injured at a recent fitness camp, Wessels said he would take up any issues he had in person with Wallabies coach Michael Cheika.

"The reality is that we're in a contact sport and people get injured from time to time," he said.

"The Wallabies would be the first to admit they can do things better, as can we, but did I have any formal dialogue that I was upset by the camp? Which has been suggested in the media.

"I didn't do that. If I did I would just ring Michael myself and wouldn't talk about that in the media.

"It's important that everyone realises that part of our role as a provincial union is to support the Wallabies.”

Melbourne Rebels play the Highlanders at AAMI Park on Friday at 7.45pm.