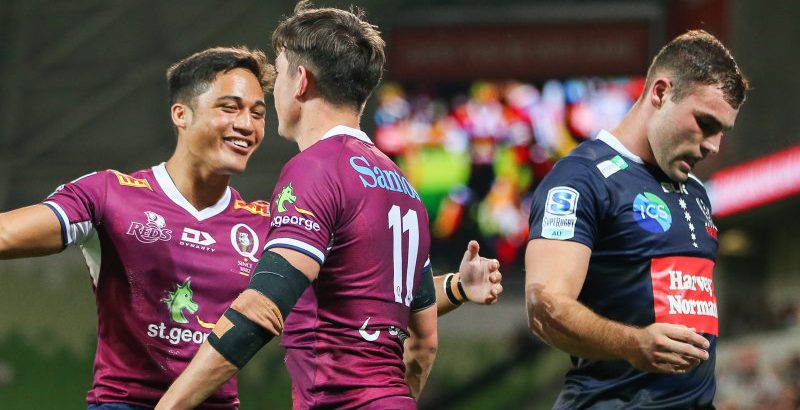 The Queensland Reds recorded their sixth win on the trot to go one step closer to a home grand final after a 44-19 victory over the Melbourne Rebels.

Within 18 minutes of Saturday night’s game, the result looked as good as done as the Reds raced to a 24-0 lead, with Taniela Tupou bagging a double. 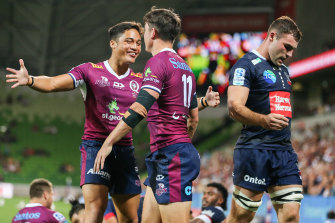 He attempted one of the great half-swan dives while scoring a try, the big prop realising mid-air he’d better brace for his fall to earth after breaking for a great five-pointer set up by James O’Connor.

Tupou’s speed and power, along with elite scrummaging, makes him a coach’s dream and he will go close to being named player of the competition for a second year in a row.

But the Rebels refused to throw in the towel and scored two tries to trail 24-14 at half-time after some brilliant running lines from Frank Lomani.

It was mostly one-way traffic in the second half though as Fraser McReight, Jock Campbell and Josh Flook crossed the paint to lock up a bonus point for the Reds.

McReight’s stocks continue to rise after another stellar performance, notably over the ball where he continues to torment opponents with important turnovers.

Brad Thorn’s side is now four points clear of the Brumbies. Next Saturday serves up a tantalising clash between the competition’s two best sides at Suncorp Stadium.

Remarkably, the Waratahs are still a mathematical chance of making finals. If the Rebels lose their next three games by big margins and the Waratahs win both of theirs, and sneak either one or two bonus points, they would go ahead of the Victorians.

That is on the proviso the Force beat the Rebels but don’t win another game.

It is effectively out of the Waratahs’ hands, and rightly so after a season to forget.

Both No.10s, O’Connor and To’omua, looked dangerous during a game played at a seriously fast pace from start to finish.

The other standout for the Reds was Hunter Paisami, who pulled off an intercept at an awkward height to race almost 70 metres and score.

The Rebels turned the ball over on 19 occasions and were their own worst enemy.