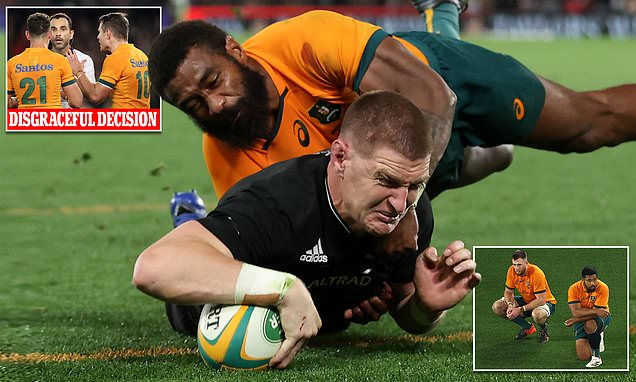 ‘Just disgraceful’: One of the worst refereeing decisions in Wallabies history ruins Aussies’ incredible comeback as All Blacks squeak out Bledisloe Cup victory in night of high drama

The Wallabies’ Bledisloe Cup drought has stretched to a 20th year after they suffered a heart-breaking 39-37 loss to the All Blacks in a drama-charged Test in Melbourne.

The Australians looked headed for a famous victory at Marvel Stadium on Thursday night after they scrapped their way back from 31-13, but All Blacks fullback Jordie Barrett scored in the corner after the fulltime hooter to secure the win.

His try came after one of the most controversial refereeing decisions in Wallabies history, when Mathieu Raynal gave New Zealand a free kick after the Aussies won a penalty on their own line and he ruled Bernard Foley took to long to take the shot for touch. 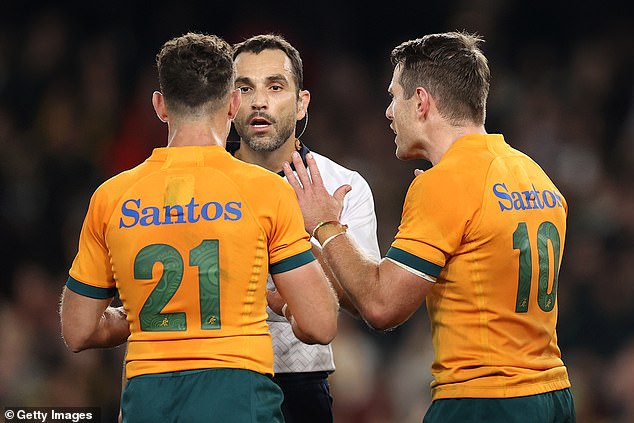 The loss means the Wallabies also crashed of the race for the Rugby Championship with New Zealand remaining on top.

The Wallabies took the lead 37-34 in the 77th minute after Nic White nailed a 55 metre penalty.

The visitors had a chance to level but instead opted for a five metre line-out and the Wallabies forced a penalty at the breakdown.

From the ensuing play the All Blacks found their man in Barrett, leaving the Wallabies devastated. 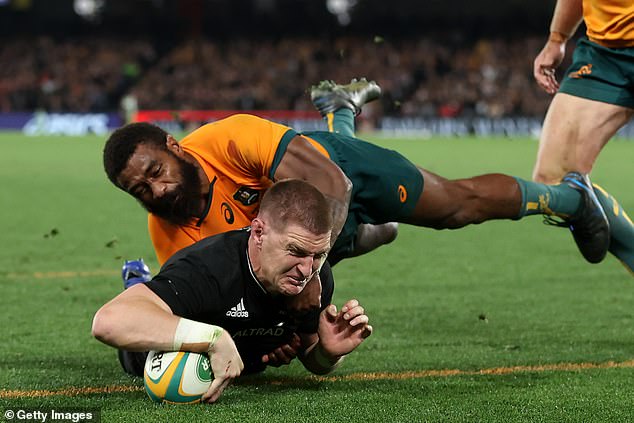 There was plenty to like about the Wallabies with fullback Andrew Kellaway scoring two tries and denied another by a blade of grass.

Five-eighth Foley, playing his first Test in three years, was a stand-out as was flanker Pete Samu in his first start of the year, while No.8 Rob Valetini also stood up.

The teams were locked at 10-10 at halftime after a hectic half that saw the All Blacks lose three players, including skipper Sam Cane to injury, while the Wallabies were forced to play with 13 men after both Darcy Swain and Tom Wright were yellow-carded at the same time.

Swain was sent to the sidelines in the 36th minute for an ugly tackle on the leg of Quinn Tupaea, with the reserve back assisted from the field with what appeared to be a serious knee injury. 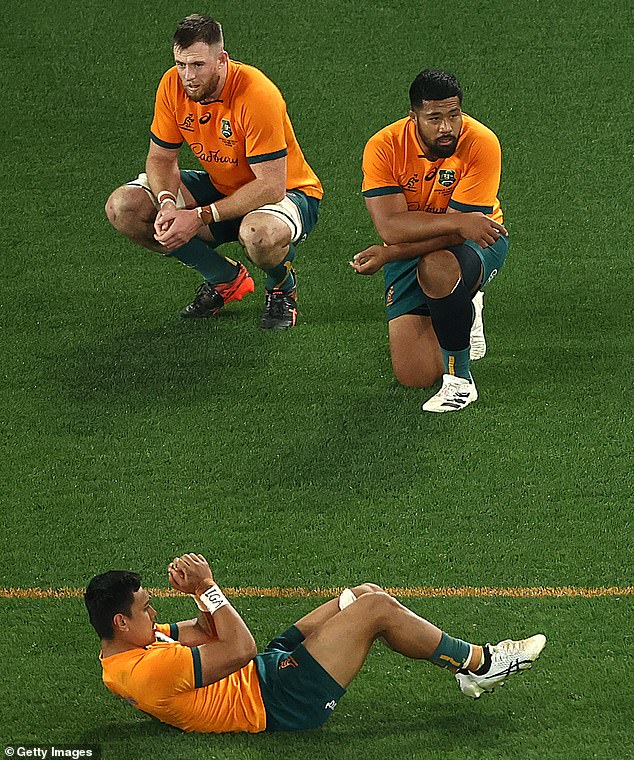 Inconsolable: Wallabies stars are left in stunned silence after their heroic comeback from 31-13 down to lead 37-34 in the 77th minute came to nothing courtesy of the referee 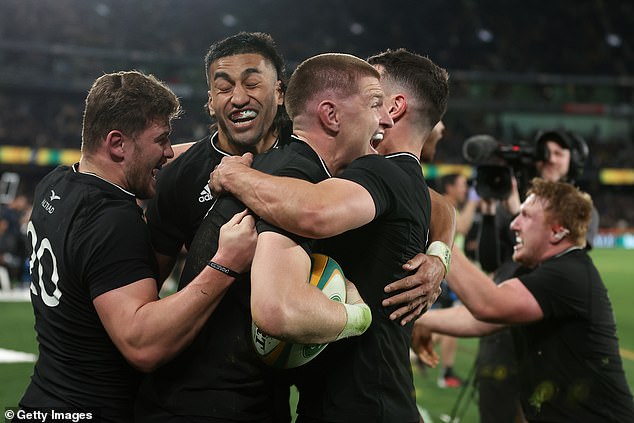 Wright was given his card for a professional foul trying to stop a break by All Blacks winger Caleb Clarke.

The home side got off to the worst possible start with a series of errors leaving them down 10-0 after 12 minutes, including a try by barnstorming hooker Samisoni Taukei’aho.

It looked like the Wallabies were on the scoreboard in the 20th minute but Kellaway missed grounding the ball by centimetres.

Valetini made no mistake five minutes later when the big No.8 barrelled over the line with Foley converting for a 10-10 scoreline.

New Zealand looked like they would run away with the match, taking advantage of another Wallabies yellow card with Richie Mo’unga and Will Jordan both crossing to push the lead out to 31-13.

But Kellaway scored twice and then Samu touched down in the 73rd minute, with Foley adding the extras to send the match into a thrilling finale.