Ahead of mediation attended by both Folau and Castle in the Federal Court in Melbourne on Monday, the latter said Rugby Australia genuinely wanted to reach a "sensible and reasonable" settlement. 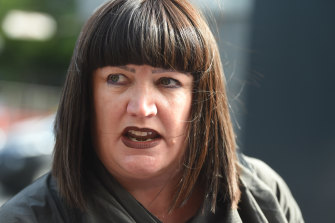 Raelene Castle speaks outside the Federal Court in Melbourne.Credit:Justin McManus

Castle said the body had received many messages of support.

"It is these messages from members of our community and the wider sports community that leaves us in no doubt that we are doing what's right," she said outside court.

"Israel's commentary subsequent to his termination have only reinforced this belief.

"But we come here today with a genuine desire to find a settlement."

Folau is seeking $14 million in compensation for what he claims was his unlawful sacking over social media posts in which he warned hell awaited homosexuals and that legal recognition of transgender and intersex Australians was "evil". 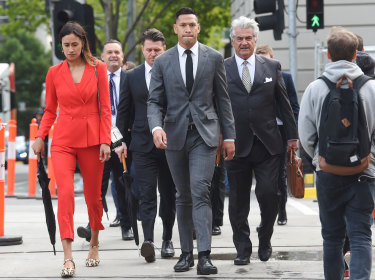 Israel Folau and his wife Maria arrive for mediation on Monday morning.Credit:Justin McManus

Castle said Folau breached the game's code of conduct at a high level.

"Israel admitted he's caused harm with his comments and stated he would not curb his social media use and would post whatever he likes whenever he feels the need to share his view," she said.

"But we come here today with a genuine desire to find a settlement that is sensible and reasonable so that we can return all of our focus and resources to growing the game of rugby."

Folau, supported by his netballer wife Maria Folau, shook hands and prayed with a small group of religious supporters as he went into court.

In a video published on his website overnight, Folau said he asked God to watch over both parties in the mediation for "real courage to uphold the truth".

"I understand that not everyone shares my faith and some find it difficult to reconcile with their own beliefs. I want to be clear, I only share passages from the Bible as a gesture of love," Folau said.

If mediation fails the case will go to trial on February 4, four days into the new Super Rugby season, the competition RA desperately hopes will give rugby fans some football to talk about, instead of this year's World Cup failure and the ongoing debate about Folau's religious views.

The discussions will start on the back of multiple days of damage control from Folau, which saw him release two videos clarifying comments he made suggesting the recent and ongoing bushfire calamity was "a little taste of God's judgment".

"Look how rapid these bushfires, these droughts, all these things have come, in a short period of time," Folau told members of his church. "You think it's a coincidence or not? God is speaking to you guys. Australia, you need to repent."

Folau said his remarks were not aimed directly at the bushfire victims, but he also doubled down on his decision to comment publicly on sexuality and other matters, saying it would be "unloving" of him to do otherwise.

"Sharing the word of God is so important to me because it's the great commission, it's what God has called each Christian to do," he said.