Saracens exuded pride and defiance on Wednesday night, on and off the pitch, as their rookie line-up frustrated title-chasing Sale – and Mark McCall was bullish about how his side can cope without Owen Farrell.

The relegation-bound Premiership champions discovered on Tuesday night that their fly-half and England captain would be unavailable for the rest of this disrupted domestic season after being handed a five-match ban for a dangerous tackle on Wasps’ teenage playmaker, Charlie Atkinson.

Their collective response was emphatically positive. 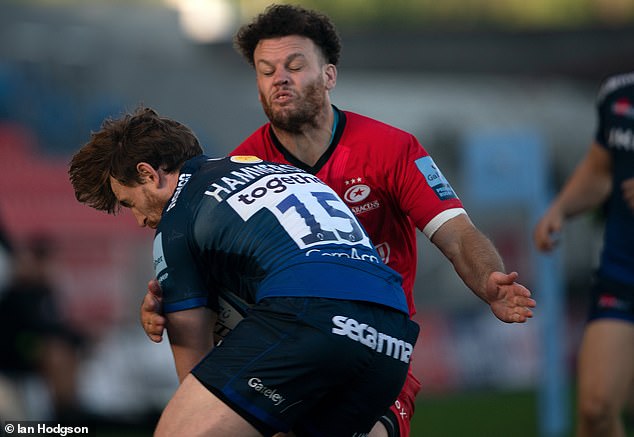 First, a reserve Saracens team rallied from a poor start at the AJ Bell Stadium to deny powerful Sale a bonus point.

Then their director of rugby struck an up-beat tone when asked to consider the enforced absence of Farrell, especially in Dublin next weekend for the holders’ momentous Heineken European Champions Cup quarter-final against imperious Leinster.

‘Owen has gone for us for this season unless we reach the Champions Cup Final,’ said McCall. ‘He is tremendously regretful about the incident and he pleaded guilty to the charge.’ 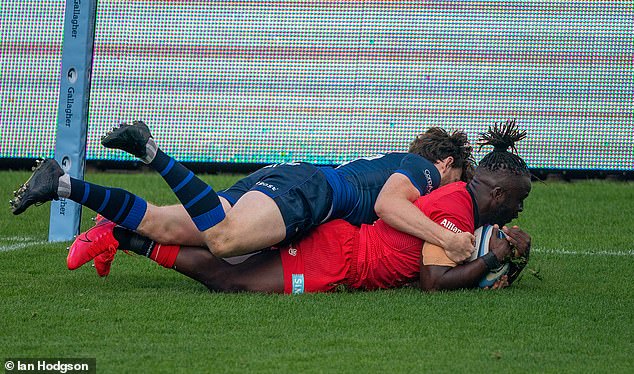 When asked to contemplate taking on Leinster without Farrell pulling the strings, he added: ‘Our opposition are very good, they haven’t lost for a long time and they are overwhelming favourites, which is understandable.

‘But when we put our full team out, everyone recognises that it is a good side, very experienced and the players have been through a lot together over the years. They are capable of great things on their day. It’s a gift for us to be involved in a knock-out week and our squad are very excited about it. We might not be involved in another one for a long time.’

On Wednesday night, with Saracens focusing on the looming contest at the Aviva Stadium, McCall had sent out a team full of fringe squad players and juniors, but they rose to a difficult occasion. After 27 minutes they were trailing 21-7, with a scrum which was disintegrating, but they steadied and fought back with energy and spirit. 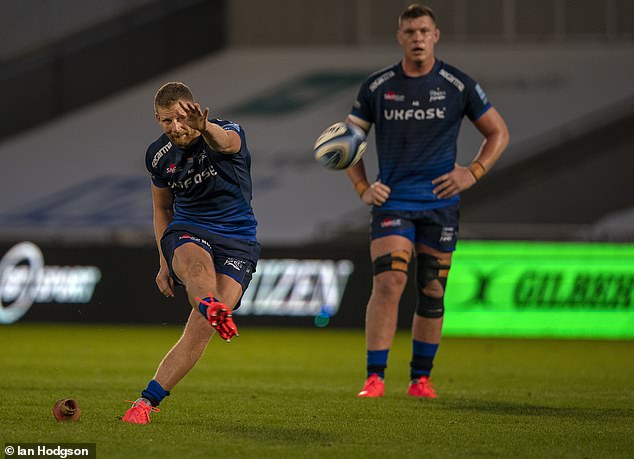 Tries by Matt Postlethwaite, the outstanding Valery Morozov and Simon Hammersley had put Sale in command, but they faltered against visitors who were wonderfully tenacious at the breakdown and in defence. Rotimi Segun touched down twice for Saracens, in the fourth minute and right at the death, to book-end a valiant performance in a losing cause.

However, despite being denied a four-try bonus, Sale moved back up to second place. Their director of rugby, Steve Diamond, said: ‘It was good to get a win; our fourth in a row. Our destiny is in our own hands.’

But he was infuriated by two scrum penalties awarded against his pack in the second half, adding: ‘Morozov, our Russian, has sent their bloke back to the Soviet Union, but the penalty went against us!’