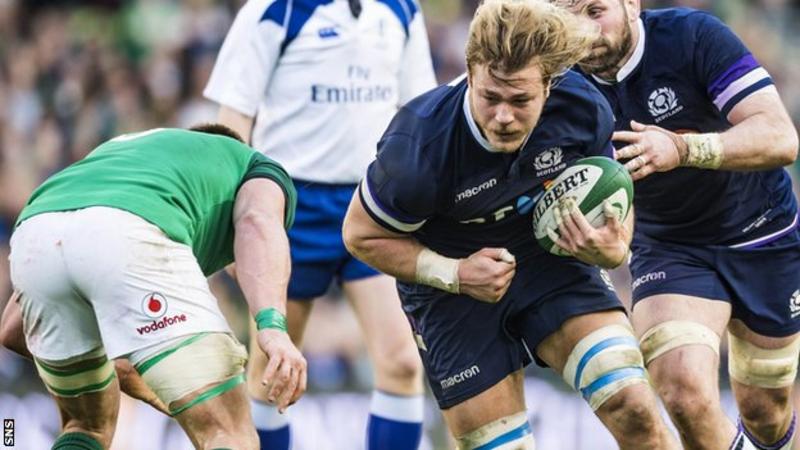 Scotland forward David Denton has been forced to retire from rugby on the advice of doctors.

The 29-year-old back row has been advised to quit following a concussion he sustained playing for Leicester Tigers in October.

“Of course, it is devastating that my rugby career is ending,” Denton told the Scottish Rugby Union website.

Zimbabwe-born Denton was capped 42 times for Scotland, making the move to Edinburgh in 2010 before spells at Bath and Worcester Warriors prior to his switch to Leicester last year.

He had not played since suffering the injury against Northampton 11 months ago.

“My reaction at the time my neurologist told me it was no longer a good idea to play rugby to be honest was a bit of relief,” said Denton.

“This had been building up inside of me for four to five months.

“I knew there was a strong possibility this moment [having to retire] was coming.

“By the time I got to it, I had been through all the emotional highs and lows, so I was prepared for it.”

Scotland head coach Townsend said it “seems to be the right decision to retire”.

He said: “We were hoping taking some time out of the game would mean he would be available for selection in our World Cup training squad and when that didn’t happen, we were hopeful he’d be back for next season, but again that’s not happened.”

Four years ago he was one of the stars of Scotland’s World Cup.

He was terrific throughout the pool games, and terrific against Australia in that what-might-have-been quarter-final.

Denton was a big ball-carrying number eight – the kind of player Scotland could do with now. It’s a great shame, he’s had a lot of injuries.

But, it just adds to the rising number of retirements through concussion. These brain injuries are a serious, serious problem in rugby.