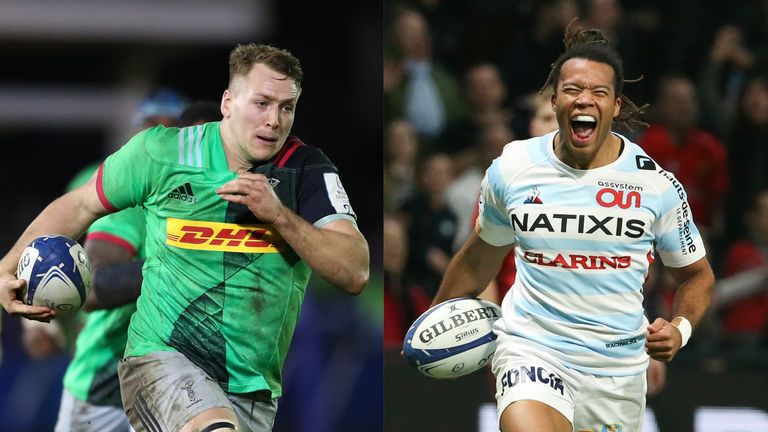 French teams dominate our team of the week after round five of the European Champions Cup.

Came in for Simon Zebo in the No 15 jersey and was excellent. Marshalled the back three well, reigned supreme in the air and carried strongly back into attack. His kicking out of hand was excellent too.

Another fine performance from Gloucester’s teenage sensation, Louis Rees-Zammit, almost got him the nod but the performance from Thomas gave him the edge. A brace from the winger helped Racing claim a hard-fought win over a desperate Munster side with his second giving them back the lead.

The Racing 92 centre scored a try, made 15 carries, three clean breaks and also made a vital challenge to prevent Munster’s Chris Farrell scoring a second-half try at a crucial point with the match in the balance.

Caused all sorts of problems for the Ulster defence as he beat nine defenders and scored a superb try. Was strong in defence too.

Just give him the ball 💥

Chris Boyd may not have been happy with the performance from Saints, but he could not have asked much more from Naiyaravoro. There was plenty of competition this week but the Saints man gets in for a barnstorming performance against Benetton. Ended the day with 140 metres off 19 carries and 14 defenders beaten.

Congratulations to this afternoon's Heineken Man of the Match, @adamhastings96 🙌 pic.twitter.com/Cwv38xdJZk

A mention for Finn Russell and Saracens youngster Manu Vunipola but another youngster in Hastings gets the nod this week. Played with plenty of composure in a pressure cooker of a game and showed some lovely touches. Could have taken a bit more time over his drop goal attempt but over all an impressive performance.

Teddy Iribaren just misses out but Kerr-Barlow was in fine form on Saturday for La Rochelle in their win over Sale. It was a running performance from Kerr-Barlow. Scored an intercept try with some good hands and was involved in another, kept Sale on their toes throughout.

Gave his absolute all for Munster with a massive showing in the tight. Carried exceptional well and put in his tackles as well.

A powerful display from Marchand. Started and finished off a strong line-out drive that saw him power over the line.

The big man was popping up everywhere for Toulouse – if he was not doing the business in the set piece, then he was carrying hard and delivering some lovely passes to keep the ball alive. Tackled strongly too.

A big effort from Jedrasiak who helped his side beat a dogged Ulster. Helped drive a strong Clermont pack and was also a handful around the park with ball in hand. Was defensively outstanding as well, weighing in with a mighty 20 tackles.

Injuries to the Chiefs meant that Lonsdale really had to step up in the second-row and he certainly delivered. Never took a step back in a big battle against Glasgow. Was excellent at the lineout and also in defence where he made 17 tackle without missing one.

Made life tough for Saints especially at the tackle area. A strong defensive display, ending the day with 16.

The Leinster flanker was a strong all-round performer, scoring a first-half try while gaining 28 metres for his side. He made six tackles and six carries as he helped relentless Leinster secure a ninth successive Champions Cup pool win. Keeps out Wian Liebenberg and Alexandre Fischer.