The Waratahs are on track to record their worst attacking numbers in a decade of Super Rugby.

A try-scoring bonanza against the Highlanders in Invercargill on Friday night could spare them some blushes but, as it stands, the absence of Israel Folau and Taqele Naiyarovoro has bit hard on the Waratahs. 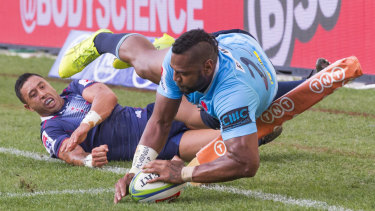 Big loss: Taqele Naiyaravoro is playing for Northampton in the UK Premiership after scoring 15 tries for the Waratahs last season. Credit:AAP

Despite competing in the top four on line breaks and offloads, NSW have scored an average of just 23.6 points per game on the back of the smallest try haul (44) of any Australian team and only the 10th highest total in the competition.

It is a 180-degree turn on last season, when Naiyarovoro (15) and Folau (11) scored 26 tries between them to help NSW record its highest average points haul (34.8) in 22 years of Super Rugby, an attacking blitz that earned NSW a semi-finals berth.

And with a huge list of the team's top names off contract this year or already out the door – from Kurtley Beale to Bernard Foley, Adam Ashley-Cooper and Karmichael Hunt –  Waratahs general manager of rugby, Tim Rapp, has a big job ahead to bring some finishing class to the roster.

Our line breaks and offloads are among the highest in the competition, but we've got to be finishing that work off.

"The challenge there is to look at the player group you have at the end and get a game plan that fits them, as well as to potentially recruit in those positions where you want a bit of x-factor and added spark," Rapp said.

"Our defence has definitely improved, which is massive, but you've got to work on both sides of the game. Interestingly with our attack, our line breaks and offloads are among the highest in the competition, but we've got to be finishing that work off.

"That can be done using good ball carriers up the middle, or solid set piece that you can launch things off. It's about addressing how we can score more tries across the whole team and what opportunities we have to attack." 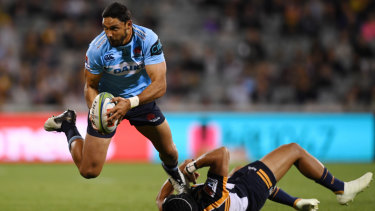 As well as the departures of Nick Phipps, Curtis Rona, Sekope Kepu and Will Miller, the Waratahs are managing a list of 12 players who are off contract at the end of the year, half of which are capped Wallabies.

Rapp said there was no cause for alarm, with the organisation well down the track on negotiations with most of them. Rob Simmons, Damien Fitzpatrick, Karmichael Hunt, Kurtley Beale and Bernard Foley are high on the priority list, while Jed Holloway and Michael Wells have also had strong seasons under departing forwards coach Simon Cron. Adam Ashley-Cooper is also off contract, with rumours swirling he could be looking to hang up the boots at year's end.

"I suppose if you look at the top-end guys it [some turnover] does come around in a cycle of World Cups, but in saying that we're pretty much across a lot of our guys and I'd say almost three-quarters of the guys we want to retain we pretty much have sorted," he said.

"For the current Super guys who've been around for a while we'll announce as soon as we get the paper work done, but we're also keeping a close eye on the U20s World Championship for some of the younger guys coming through our program.

"Then we, like Queensland, also have the luxury of sitting back and watch our up-and-coming talent in the Shute Shield and the NRC, where we can watch them perform week in and week out. It's important to us that we recognise those competitions."

In the Junior Wallabies the likes of second rower Will Harris, five-eighths Will Harrison and Ben Donaldson and prop Angus Bell are already part of the NSW Academy program and were given a taste of the action this season in the Emerging Waratahs team that played Brumbies and Blues outfits of the same kind.

Waratahs players off contract this year

Adam Owen interview: Seattle Sounders role for best British coach you might not have heard of