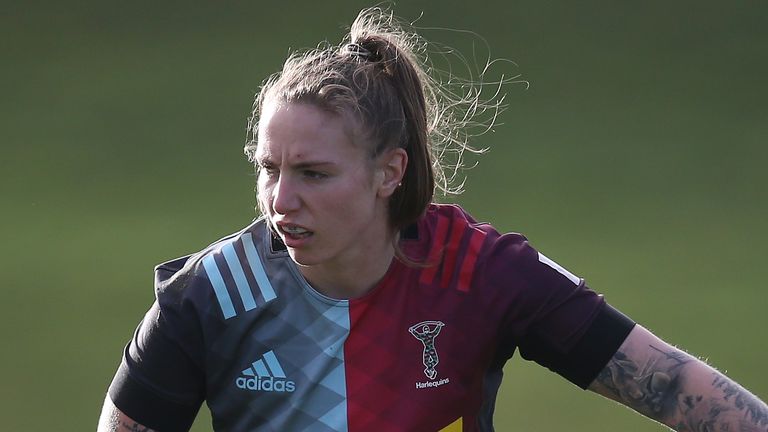 Who gets your vote? ⭐

Check out these four scores from the weekend and choose your #Premier15s Try of the Week below ⬇ pic.twitter.com/DVVCmmuTMW

Phoebe Murray was on 🔥 this weekend. pic.twitter.com/Blj3EPtchn

Bristol kicked off 2020 with an impressive 48-0 win over Firwood Waterloo at Shaftesbury Park on Saturday.

Sarah Bern returned to the starting line-up for Bristol after recovering from injury and she crossed over the whitewash in the opening 10 minutes – promising news for England head coach Simon Middleton ahead of the Red Roses’ Six Nations campaign.

Bristol centre Phoebe Murray was the star performer scoring a hat-trick, while co-captain Clara Nielson crossed for a brace of tries.

Firwood Waterloo remain rooted to the bottom of the table with only one win to their name so far this season.

Successful day in the office for the Swarm with two victories in the bag for the first game of 2020! The 2XV won 24-12 whilst the 1XV secured a convincing 45-7 victory! Thank you @DMP_Sharks for two physical games and best of luck for the rest of the season! #wefeltthebuzz pic.twitter.com/IITVpXV8AA

Wasps travelled north in Round 11 bagging all five match points against DMP Sharks at The Northern Echo Arena and the visitors were quick out of the blocks, with Abby Dow and Hannah West scoring early on.

West crossed over for her second later in the first half before Isabel Rico and Harriet Millar-Mills added their names to the scoreboard, leaving the half-time score at 31-0.

The second half was played at a slower pace, but Maud Muir and Claudia MacDonald did manage to extend the deficit with them both crossing over the whitewash.

DMP Sharks did score a consolation in the second period, but it was a case of too little, too late.

Despite Gloucester-Hartpury leading 10-7 at the break, it was Harlequins that claimed the spoils at the Alpas Arena on Saturday with a dominant second half performance.

Jade Konkel scored a brace for the visitors, with Sarah Beckett, Shaunagh Brown and Davinia Catlin going over as well.

This bonus-point win for Harlequins was all the more impressive when taking into account the dreadful playing conditions.

The kick return from @Rachlaqeretabua 🏃‍♀️

The tie of the round came at Allianz Park, with second-place Saracens hosting third-place Loughborough Lightning.

The reigning champions were in cruise control in the first forty and led 24-7 at the break. May Campbell scored twice, while Alex Ellis and Zoe Harrison also crossed over earning the hosts their try bonus-point in the first period.

Loughborough, unbeaten in the league since October, turned the tide somewhat in the second half and team-mates for club and country, Sarah Hunter and Emily Scarratt both scored.

The hosts held on though to make it 10 out of 10 so far this season.

A wonderful finish by @Lbthom1 as @WorcsWarriorsW secure the bonus-point with try worked from inside their own half 👏 pic.twitter.com/1Mg5KrPyKn

Sioned Harries was the star performer at Sixways as Worcester ran out 24-17 winners over Richmond. The Wales international scored a brace in the first half and was rightly named the Tyrrells Player of the Match.

Lydia Thompson’s try five minutes from time put the gloss on the performance as it not only secured the win but also brought about the much-needed bonus-point.

The Warriors have now won three home games on the bounce. Richmond sit one point above bottom-placed Firwood Waterloo in ninth spot.

📊 And here’s what it does to the table @HarlequinsWomen stay on top with @SaracensWomen keeping up the pace 🏉#Premier15s pic.twitter.com/hjVVPUkzAC