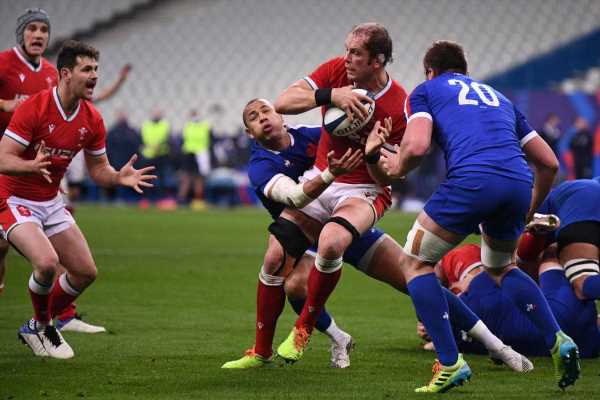 English and Welsh heads hung similarly in the despair of defeat but even in that unifying image the contrast was clear. Exhausted Welsh bodies rued what might have been as they slipped, cruelly and dramatically, from the final Six Nations precipice in defeat to France; a bewildered England have deeper questions to answer after another debacle in Dublin.

An urgent post-mortem is required on what remains of Eddie Jones’ side, and it will find strikingly familiar wounds. For a third time in this disaster of a Six Nations, they were comprehensively beaten, mentally and physically. England failed to combat Ireland’s bombardment, and again they were troubled by ill-discipline that has haunted them all tournament.

“It feels like we are giving the opposition every chance to be the best version of themselves whilst making it as hard as we possibly can for ourselves,” said Jonny May. “Everybody’s unhappy. [We had] the opportunity to finish on a high and show we have learned lessons and improved. We didn’t do that today. There are lots of things within our control that we are not doing right.”

There will be plenty to hurl at Jones in the stocks after a tournament of questionable selections and, a glorious 80 minutes against France aside, a succession of deeply uninspiring performances. Having spent the week trying to wash the “rat poison” from his players’ minds, Jones’ midweek piping had England scurrying beneath Ireland’s perfectly laid traps. England’s head coach cut a disappointed figure as he faced a first inquisition at full-time, yet he claimed prescience as he talked of “transition” and a “tough period” after better times.

“We are very disappointed,” said Jones. “It is not acceptable. The fact is that this team was always going to go through a period like this following the World Cup and it is a period where we will transition.

“I think there are a number of players in our squad at the moment and a number of players outside that will get their opportunity in the Lions period. There will be changes in the team. The guys who are lucky enough to be selected for the Lions will have to compete very hard to get their places back once these young guys start coming through.”

The RFU needs only glance westwards to see how swiftly fortunes can change – dissenting voices would have been relatively limited had Pivac been hastily moved on from Wales’ top office after an autumn of discontent – but on-field improvements must be made. For a union still feeling the impacts of coronavirus, an uncoupling would be undesirable, though a break clause in the Australian’s contract suggests that finances may not be prohibitive. Jones used his most recent annus horribilis in 2018 to refresh and build towards the Japan World Cup, and it is likely he is offered the opportunity to do similarly again. Jones foresees perhaps a third of his current squad failing to make the 2023 World Cup.

England’s summer itinerary had called for a tour of North America while the British and Irish Lions were in South Africa pre-pandemic – it is possible that both of those tours now occur on these shores. Quite how many Englishmen will make Warren Gatland’s squad is unclear. Very few in white have advanced their case in recent weeks.

Instead it is likely Gatland looks to his old stomping grounds. The wounds will sting having come so close to the Grand Slam but Wales will reflect warmly on a Six Nations they may yet win. With experienced heads (there were 987 caps in Saturday’s starting XV) learning new tricks, Pivac deserves great credit for his transformative role after a tough first 12 months, and though ultimately defeat narrowly came, Wales have overachieved.

The battle-hardened playing group also warrants praise. Alun Wyn Jones, totemic again and continuing to defy the traditional ageing process, and must now be considered the favourite to lead the Lions into battle with the South Africans. Dan Biggar and Gareth Davies both provided timely reminders of their qualities at half-back spots that look up for grabs, while the centres and wings will all be in the mix for Test selection as a penetrative quartet. Josh Navidi, Justin Tipuric and Taulupe Faletau would all be worthy back-row starters.

Irish faces will also arrive with a smile after the best performance of the Andy Farrell era. Certainly the immense Tadhg Beirne and Robbie Henshaw did their chances no harm in victory; the guiding forces of Johnny Sexton and Conor Murray also. A final farewell for the retiring CJ Stander would be desirable both for the romanticist and the pragmatist.

Before then, though, the destination of the Six Nations crown is still to be decided, and in the city of light, a final Friday night illumination awaits. France will need a convincing home victory with a bonus point and a margin in excess of 20 points to take the title from Welsh hands.

But who is to say that this wonderful French side won’t do just that in Paris? Victory over Wales was secured with composure and cohesion as Brice Dulin found the fissure at the last, the influence of Fabien Galthie and Shaun Edwards’ clear – like Paul Cezanne, a sense of order and structure imprinted on the post-impressionists of French rugby’s Belle Époque.

Scotland, and Wales, will nevertheless take confidence as Pivac’s men, for the first time since Edwards’ arrival, found French defensive patterns painted in a more passive manner. Should Finn Russell be fit, and should the Scottish attack click as it did at times in their lunchtime cruise past Italy, a final salvo befitting this remarkable Six Nations edition could come.

Wales, Ireland and England will watch on. Who knows quite how the world will look when these sides next go back into battle at full-strength in the autumn, but for England, the outlook is unlikely to be worse.