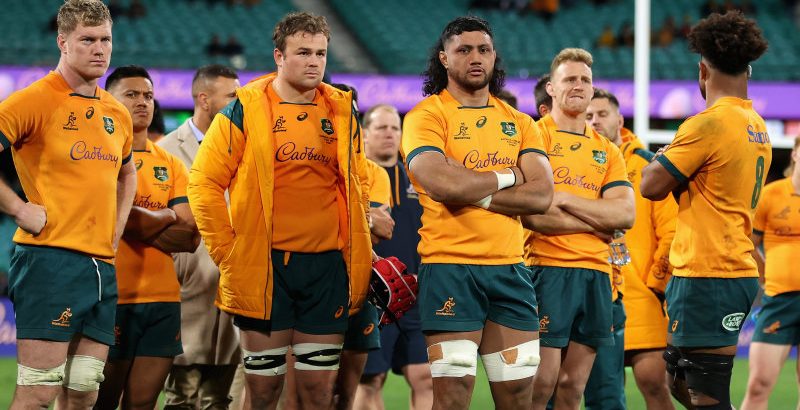 The game is trapped in a pre-November 1942 time warp. Ewen McKenzie and Michael Cheika both had a 50-per-cent winning ratio as Wallabies coach, Dave Rennie just 39 per cent. There have been isolated victories along the way but, like Dunkirk and the Battle of Britain, the real achievement was in averting total annihilation.

Not to compare war to sport, but Australia had its El Alamein moment – ironically enough, against England – at the Sydney Cricket Ground on Saturday night, a chance to finally move onto the offensive. And they let it slip.

Most vexing of all was the lack of intellect they brought to the occasion. When the game was in the balance over the final 14 minutes, all they offered up was old-style Cheika-ball – reverting to blind physicality. It was mindless, brute-force rugby and it played directly into the strengths of Eddie Jones’ team.

Where was the guile, where were the tactics, where was the execution? Australia’s play right at the end, when they fruitlessly circulated the ball through nearly 20 phases, was eerily reminiscent of the opening salvo in the World Cup quarter-final against England in 2019. There, in Oita, the Wallabies launched an 18-phase onslaught which had Jones sitting forward anxiously in his seat. But when it fizzled out following a Christian Leali’ifano knock-on, Jones sat back comfortably in his chair. From that moment onwards, he knew Australia had no weapons to hurt his side.

As in Japan, Australia enjoyed an overwhelming preponderance of possession on Saturday but were so predictable that England’s defenders were able to settle into their work. 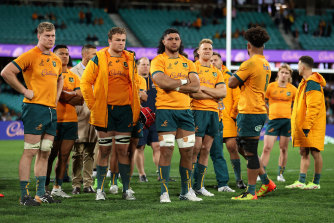 The Wallabies are staring down the barrel of back-to-back World Cup quarter-final exits unless something changes.Credit:Getty

Jones observed afterwards he had expected a more adventurous Australia, expressing surprise at how conservative the Wallabies had become. As with many of his post-mortem assessments, there was an unnecessary sting in the tail, yet he wasn’t the only one surprised.

Rennie does a good job of hiding his emotions up in the coaches box, but some agitation did begin to show through as the Wallabies attempted to force it.

Michael Hooper, so effective as a link man, was trying to run the crash ball and getting creamed for his efforts. Even Tate McDermott, the halfback, was getting monstered by the England forwards as he darted close to the ruck, though their pillar defence never lost concentration during his 20-minute shift.

In a sense, McDermott was still doing his job. Merely by threatening to cut loose, he was forcing England to commit extra defenders in close, which should have created space further out. Too often, however, the passing was so haphazard the Wallabies were chasing the ball sideways. 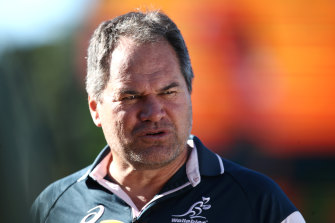 Yet in a sense Australia were outsmarted from before the Test began.

Why was Harry Wilson selected on the side of the scrum? He hadn’t played since the Reds’ Super Rugby quarter-final against the Crusaders seven weeks ago. That match, as in all others this year, he played at No.8, yet on Saturday night he was selected at blindside flanker. Rennie waited until the deciding Test before giving Wilson a chance and then chose him out of position. He spent the match turning up for a party which had already moved on.

That should be a lesson moving forward. Pick players in their specialist positions.

Still, it is now make-or-break time for Rennie. If he keeps going down this predictable path, Australia will surely exit the World Cup at the quarter-final stage in October next year. The time has come to be bold.

With Samu Kerevi not going to Argentina because of the Commonwealth Games sevens, Rennie has the chance to look beyond the players who have served up his 39-per-cent win rate. At the risk of recommending yet another Brumby for international honours, he should consider Hudson Creighton. The Australia A outside centre has the ball skills, the left-footed kick and the size to make an impact. More importantly, he has the pure pace.

Indeed, if pace is at a premium, Rennie may also want to be inventive at five-eighth. Quade Cooper and Noah Lolesio can carry on the work of recent years and while the temptation would be to opt for the Waratahs’ Ben Donaldson as a third 10. That would be a conservative option. A more adventurous pick would be Creighton’s older brother, Lawson.

With James O’Connor injured, Creighton made his debut at No.10 for the Reds against the Hurricanes and looked entirely at home as Queensland raced to a 17-0 lead. But then he threw an intercepted pass and retreated into his shell. He took time to regain his confidence but, on top of the family speed, he can also run a game.

It’s a gamble. But if Australia ever wants to discover what post-Alamein rugby is all about, they can’t keep doing what they have always done.