The Wallabies will get some respite from their Eden Park curse after it was confirmed Wellington will host the only Bledisloe Cup Test in New Zealand next year.

The second Test in 2020 between the trans-Tasman rivals will be staged at the newly named Sky Stadium – formerly Westpac Stadium – on August 15. 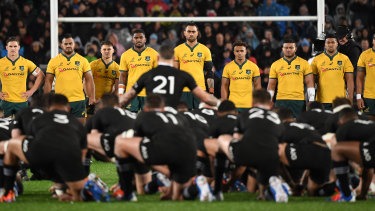 The Wallabies will avoid their hoodoo ground next year against the All Blacks.Credit:AAP

The opening clash will be in Melbourne a week earlier with the third Test in Brisbane on October 17.

Dave Rennie is scheduled to join the Wallabies next July.

While Australia's record in Wellington is far from impressive, there will be some relief they don't face another trek to Eden Park, which has been the scene of some fearful defeats over the last decade.

The Wallabies won their maiden Test at Westpac Stadium in 2000, when John Eales landed a penalty goal after the final hooter.

They've lost the four subsequent Bledisloe Cup Tests there – most recently 29-9 in 2016 – but it was the venue of their World Cup quarter-final win over South Africa in 2011.

Sky Stadium will also host a Test against Wales in July.

Eden Park will stage the opening Test against Wales and New Zealand's last home Test of the year, when they face the world champion Springboks on September 5.